The National Institute of Cannabis Investors released a presentation about “Wonder Plants” that could be worth $1.1 million.

In it, they discuss a discovery by a team of scientists from Southern California that involves a new cannabis plant and a series of breakthroughs that could lead to a startup soaring 11,113% within a year.

In this article, I walk you through the main talking points of that interview to enable you to decide what to make of the opportunities that were advertised.

What is Wonder Plants? (The Pitch)

“Wonder Plants” reads the title of a presentation released by the National Institute of Cannabis Investors promoting the Cannabis Venture Syndicate.

It was hosted by John Burke, an investigative journalist, who interviews a guy called Mike who represents the company that is being teased. 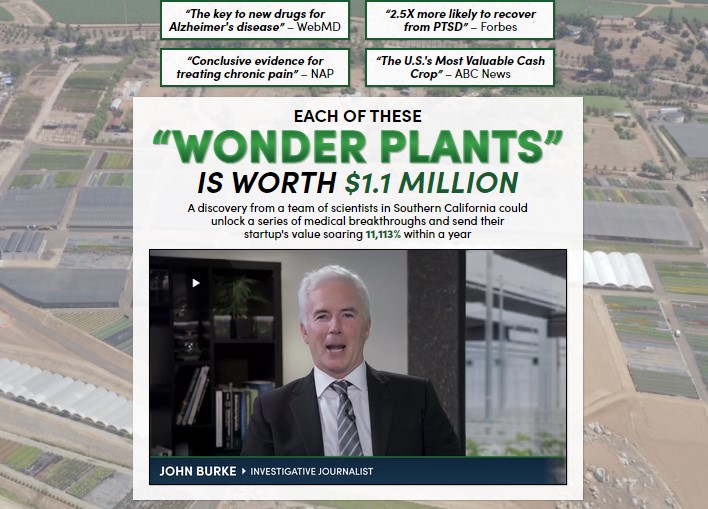 The gist of it is that there is an investment opportunity in the cannabis industry that centers on one company that is tackling a big pest problem for growers.

John starts things off by introducing us to a pest that has posed a challenge to marijuana growers. He says that this mite is a close relative of the scorpion, tick, and black widow spider. It can only be observed under a microscope and it spreads “like wildfire,” producing a million offspring in just one month.

Although it attacks over 200 types of crops, it prefers to attack cannabis plants and when it infests a farm, it can destroy a harvest overnight and is particularly devastating to indoor farms, which account for about 33% of the medicinal weed in the market.

And this brings us to the company that has the solution to the mite problem.

The subject of this teaser is a small, private company that was valued at $53 when they did the presentation.

“Fortunately, I’m here at a tiny startup in San Diego, California, that has discovered a miraculous solution to this growing threat.

They discovered a way to safely and naturally turn back the biological clock inside a cannabis plant and boost its immune system.”

By turning back the biological clock, this means that they take a sickly and mite-infested plant (the “mother plant” that is due to be used to clone new plants) and they rejuvenate its genetics.

In doing so, they eliminate the viruses, molds, spider mites, and other pests that may degrade the quality of the plant. After this, the plant is called “an elite mother.”

After that, the plant can produce fresh offspring that can fight the threats of pests and disease and produce high-quality produce:

“Without using any pesticides – these new wonder plants can quickly destroy the predators in this case and 1,000 other threats like them.

The cannabis that emerges from this process is of the highest quality and potency.

Well, when you count its champion offspring…

Each of these plants is worth $1.1 million a year.

Yes, each one is a million-dollar plant.

Altogether, this startup can partner with any cultivator and boost their annual revenue by up to 278%.”

So, this company partners with cultivators to improve the quality of their crop so that they can fetch higher prices for their produce.

At the same time, Mike says that the yield also increases by 67% because when they partner with a cultivator, they take care of the cloning process so that they (the cultivator) only worry about taking care of the crop until it is ready to harvest.

What else do we know about Mike’s company?

John says that it expects to partner with major cannabis growers like Aurora and Canopy Growth who are worth large sums of money.

He mentions that if it undertakes the project and works with growers, its market capitalization can go up by 11,113% within a year and become a unicorn (a startup with a valuation of $1 billion). This means that their valuation will go up from $53 million to $5.94 billion within a year.

What is the National Institute of Cannabis Investors?

The National Institute of Cannabis Investors, also known as the NICI, is a collection of people who have been involved with the cannabis industry as investors, founders, CEOs, and even doctors at top medical institutions who are working on cannabis therapies.

The purpose of NICI is to avail investment advice touching on cannabis to retail investors through its various research services; the most prominent one is Cannabis Venture Syndicate.

John Boehner, the former speaker of the house, is one of the members of the advisory board. After retiring from politics, Boehner, who was once opposed to legalization, surprised many when he joined Acreage Holdings.

John Vardaman is also a member of NICI. He is known for drafting the Cole Memo, which defined the federal government’s hands-off approach to allowing states to sell weed.

Dr. Michael Dor, another prominent member, is the head of cannabis research for the Israeli Ministry of Health.

Other notable names on the board are Tom Gentile and Michael A. Robinson, who are both members of the editorial team at Money Map Press.

What is the Cannabis Venture Syndicate? (The Newsletter)

Cannabis Venture Syndicate is a research service that is sponsored by the NICI. It alerts its members to new startups in the cannabis industry that they should consider investing in.

This is not the first time I am writing about Cannabis Venture Syndicate; case in point, I recently reviewed a presentation introducing it in which the ousted founder of Canopy Growth, Bruce Linton, pitched his new company.

When you sign up for it, you are entitled to:

If you join via the presentation, you also get details regarding three startups. One is a medical startup developing cannabis therapies, the second one deals with CBD beverages, and the third one is developing a cannabinoid drug to cure multiple sclerosis.

How much do you pay to join the Cannabis Venture Syndicate?

A one-year membership to the Cannabis Venture Syndicate costs $1,950

Does the Cannabis Venture Syndicate have a Refund Policy?

There are no refunds when you sign up for the newsletter.

The National Institution for Cannabis Investors released the presentation to promote the Cannabis Venture Syndicate.

They also wanted to alert us to a small private company that they want us to invest in that has the potential to increase its market cap from $53 million to $5.94 billion in one year (an 11,113% rise in value) by their projections.

They brought in one of the founders of the company, a guy that goes by the name Mike, to talk about their operations and spell out their plans for the future and their projections.

When you join the Cannabis Venture Syndicate, it comes with the promise of learning about these types of opportunities; cannabis startups to invest in before they take off. Before you join it, you should read more on it to ensure that you are fully informed about what you are signing up for.