I had been receiving tons of emails from Banyan Hill about Paul Mampilly’s Super Bull Summit, so I decided to take a closer look.

If you have also been receiving those emails, you may be wondering what the summit is all about and what Paul is teasing in his latest presentation.

After sitting through the pitch and doing some research, I uncovered his “number one Super Bull Stock,” which I will reveal later in this article. But first, here is a summary of what the summit was about.

What is The Super Bull Summit?

The Super Bull Summit by Paul Mampilly (hosted by Corina Sullivan), is an event during which Paul shares his thoughts on the market and identifies the stock that he wants you to invest in.

He claims that now is the perfect opportunity for retail investors to dive into the market because we are on the cusp of “one of the most important wealth creation eras for Main Street Americans in the last 123 years.”

Here is what he said after Corrina remarked that investors had opened around one million brokerage accounts during the coronavirus market crash:

And this time, I truly believe regular Main Street American investors have got it right, Corrina. I am more bullish now than I’ve ever been in my life.

Amid all this, he has identified a stock that he believes can generate returns of at least 1,460% in the next 12 to 36 months. More on that in a bit.

Why is Paul Bullish?

Paul believes that the market will be driven by the convergence of three powerful economic forces.

He claims that many companies have surged over the past couple of months and that the trend is going to continue.

“It just takes finding the right investments — the America 2.0 companies are flourishing now, while old-world companies that we will soon see as relics completely flounder.”

This is about the concept of “America 2.0,” which I addressed when I reviewed the America 2.0 teaser he released earlier this year.

In that teaser, he mentioned that new companies that meet new demands will come in to displace old companies that fail to adapt to the new economic realities i.e. due to the pandemic.

The three economic forces he thinks are going to drive the bull market are:

How Mampilly pick’s his stocks

Paul now wants to target stocks that are on the verge of going up by 1,000% or more because he thinks there will be a couple of them achieving that milestone in a bull market:

“But with everything happening, I believe targeting stocks on the verge of soaring 1,000% or better will be easier than ever before.”

He has developed a strategy that avoids the illiquid and volatile stocks and finds stocks that are primed to rally 1,000%.

It is distilled into three “signals”:

What is Paul Mampily’s No. 1 Super Bull Stock?

Paul claims that he has found a company that meets the criteria and that he believes has the potential to go up by 1,460% in the next 12 to 36 months.

He drops the following clues about it.

“The company operates in the semiconductor space…

“As we speak, the share price is under $10 and the company is sitting at less than a $1 billion market cap.”

Curiously, I realized that if you only read the transcript, you will miss out on some of the clues he drops during the video presentation.

So, what are those missing clues?

“The CEO worked for years at Lawrence Livermore National Labs.”

“It is a key supplier for a very rare and very costly material called indium phosphide.”

“Also a major player in gallium arsenide, which is absolutely vital for industrial lasers, 3D sensing, and industrial LED lighting.”

“Also produces germanium, which is used in satellites and solar cells”

The company that fits those clues is called AXT (AXTI). AXT is a semiconductor manufacturing company that is based in Fremont, CA, although it has subsidiaries in China.

Paul Mampilly is one of the most prolific investment gurus in the newsletter business. He works for Banyan Hill Publishing where he edits a bunch of newsletters.

Every once in a while, he releases a pitch (like The Super Bull Summit) where he sparks interest in some firebrand stock and ensures that you have to subscribe to one of his newsletters to learn more about it.

Before he got into the world of newsletter-editing, Paul was a hedge fund manager on Wall Street. He managed multi-billion hedge funds during his time there and even won an investment competition in 2008 (during The Global Financial Crisis) that pitted him against some of Wall Street’s best managers.

His newsletters include Profits Unlimited, True Momentum, Paul Mampilly’s 100X Club, Extreme Fortunes, The $10 Million Portfolio, and a few others.

What is Extreme Fortunes?

If you would like to learn more about Paul Mampilly’s number one recommendation, you have to read the report he has written about it called The Ultimate Super Bull Investment.

You can get a free copy by subscribing to Paul’s investment newsletter called Extreme Fortunes. 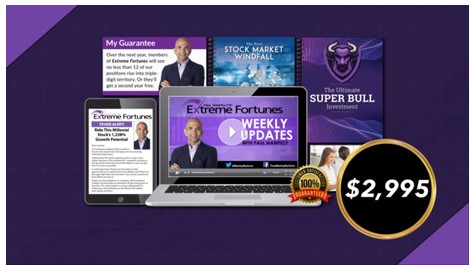 Through this service, Paul recommends an average of three stocks to his followers every month (but this number varies depending on the opportunities Paul identifies).

If you join through this presentation, in addition to the Super Bull Investment report, you will also receive another report as a bonus called The Next Stock Market Windfall.

It contains the names of five stocks that meet his three criteria just like the main recommendation.

Unfortunately, there are no refunds once you subscribe. Instead, he offers the following guarantee: 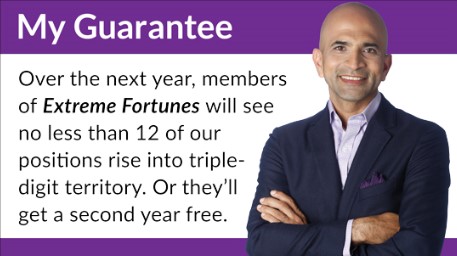 If there’s anything I took from Paul Mampilly’s Super Bull Summit is that he believes that the market is going to be bullish – more than it has been so far. He envisages a new wave of companies rising more than 1,000% on the back of a surging market and he has a way of identifying them before they soar.

These are small companies that he says have the potential to become major companies.

He also uses the presentation to promote a newsletter called Extreme Fortunes that retails at $2,995 and has a NO REFUND policy. It is geared towards small-cap stock investments (or companies with market caps between $300 million and $3 billion).

Therefore, if you want to follow Paul’s insights regarding microcaps and are willing to join it, don’t expect to receive a refund if you change your mind along the way.