Looking for a review of the “Jeff Brown’s Tech Melt” presentation?

I sat through it and after researching it, I decided to write this article to give you an overview of what Jeff discussed during the presentation in case you haven’t checked it out.

Stick around because I also reveal the name and ticker symbol of “Jeff’s #1 Biotech Stock.”

What is Jeff Brown’s Tech Melt?

The presentation begins with Chris Hurt (the host) highlighting Jeff’s past achievements as appears to be standard procedure in these kinds of pitches. 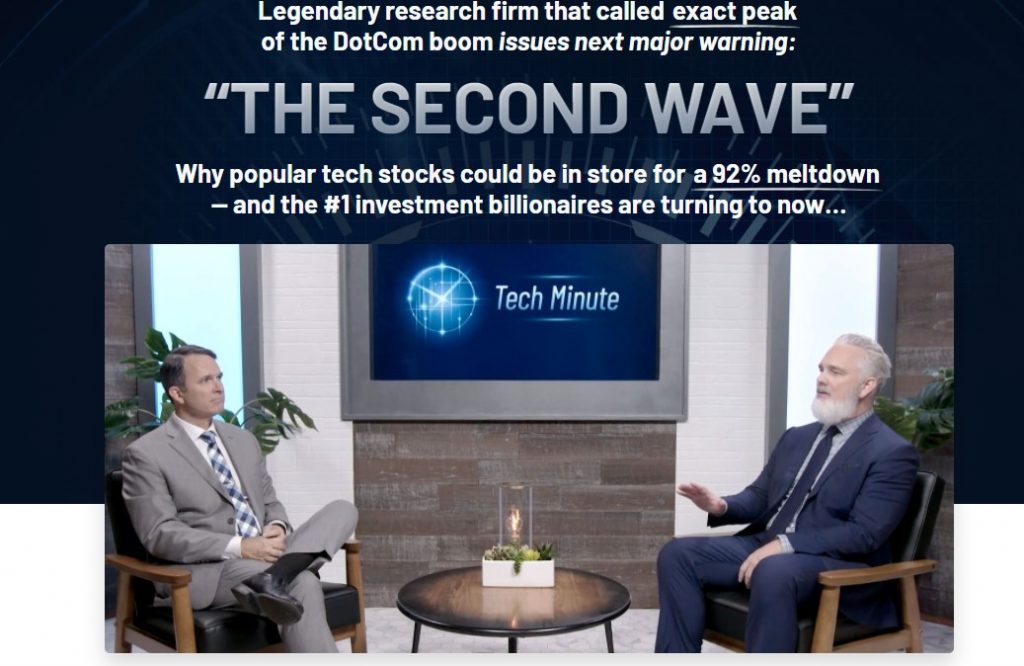 Then the conversation quickly segues into Jeff’s latest prediction, and I quote:

“Some tech stocks, which have reached absolutely absurd valuations… Are going to crash hard.”

This means that he is predicting a major market crash because tech stocks have been the main drivers of the dramatic recovery we have been witnessing – a drop off in tech stocks can drive the market down.

He is recommending that we turn our attention away from tech stocks and onto “market resistant” stocks:

“At the same time, there’s a small segment of the tech world… largely ignored until now… that’s rising up fast. And billionaires (including Jeff Bezos) are quickly shifting their money to this small sector.

I call these ‘market resistant’ stocks. And, over time, these types of shares have turned $5,000 into as much as $1.5 million.”

He then brings up the Pets.com vs. Amazon argument to prove that while some stocks will plummet, others will go up in the same market, much like those two did during the Dot Com bust in the early 2000s.

Jeff claims that we will see a new crash that will be like the one we saw in March and that the only way to protect ourselves is to invest in certain stocks, which he promises to reveal.

He even says that we are about to go into a recession:

“But, at the same time, we’ve now officially entered a recession… We still have close to 20 million people out of work….”

“Companies lost billions in the last shut-down. But, as I mentioned, that’s not being priced in. There’s a huge disconnect right now between corporate profits and stock prices.”

He infers that since the market rally we are witnessing is not backed up by a solid economy, when the reality of an ailing economy gets priced in, the market may crash.

But, he offers a solution:

The #1 stock you should invest in

He touts a company that he claims is leading a 5,900% biotech boom that has to do with genome sequencing.

Genome sequencing refers to reading the order of DNA bases in a genome. Jeff says that this information will enable doctors to cure some diseases (including coronavirus) very effectively.

Now, going back to the stock he is recommending, he drops a few hints about it.

“It provides the testing equipment researchers need to evaluate their different potential treatments for the coronavirus. This equipment is used by over 10,000 research labs worldwide.”

This means that it makes the machines used for genome sequencing.

“… the FDA recently issued them an Emergency Use Authorization… a kind of ‘fast track’… Which, this company will be the first… the absolute first to use genome sequencing to diagnose Covid-19…”

The third clue is in its personnel: Craig Venter, a pioneer in genetic sequencing, is working with the company and Dr. Scott Gottlieb, a former FDA commissioner, serves in its board of directors.

Jeff goes on to say that since the company is about to release a new sequencer, now is the perfect opportunity to invest in it. He likens this to when Apple releases a new iPhone because revenue and share price usually both go up.

He has written more about the company in a report titled The #1 Biotech Stock 0f 2020: Why the FDA Just Fast-Tracked the “King of Genetic Sequencing.”

But you don’t have to wait for that as I am about to reveal the name below.

What is the name of Jeff Brown’s mysterious company?

After doing a bit of research, I found that the company he is recommending is Illumina (ILMN).

Wikipedia describes it as a company that creates integrated systems used to analyze genetic variation and biological function. It provides products and services used for sequencing, genotyping, and gene expression.

These two match with the clues that Jeff provided in the pitch.

At the same time, he has a list of five stocks that you should avoid because they are overvalued. He has compiled them in a report called Toxic Tech: 5 Tech “Darlings” to Dump Right Now.

Among the companies he is dissuading readers from is Zoom (ZM) because he thinks it is massively overpriced.

Jeff Brown is a tech investment analyst who has spent the majority of his career working as a high-technology executive. He has worked as an executive for companies like NXP semiconductors, Juniper Networks, and Qualcomm.

He founded Brownstone Research, a publishing firm through which he publishes newsletters like The Near Future Report, Exponential Tech Investor, Early Stage Trader, and the free newsletter called The Bleeding Edge.

He is also an angel investor, focusing on the tech industry where he leverages his industry experience to find the best startup opportunities.

What is Near Future Report?

The Tech Melt presentation was meant to pitch his advisory service, The Near Future Report because you have to sign up for it to receive his two main reports:

The Near Future Report is his flagship investment newsletter and when you sign up, he also throws in a few extra reports, like The New Economy: 5 Stocks That Will Soar in the “Post-COVID” World and The Top Biotech Buyout Candidate: The 2,200% Secret.

In case you are dissatisfied with the advisory service, they allow cancellations and refunds:

Jeff Brown’s Tech Melt was meant to achieve three things: advertise the Near Future Report newsletter, temper the excitement around tech stocks, and encourage people to invest in biotech stocks.

Jeff Brown has been going on about the biotech industry for the past few months. We even saw it with his Timed Stocks presentation where he urged people to focus on biotech stocks.

He believes that biotech stocks are “market resistant” as demonstrated here in an excerpt from the presentation:

“What most people don’t realize about biotech stocks is… They don’t move in the same way as other sectors… They’re very ‘market resistant.’”

While I think that they are solid picks, there is an argument against going all-in on them because they could be doing well because they are actively involved in finding a vaccine and cure for the coronavirus. So, there is a whole lot of survival bias there that he fails to factor in.

That being said, if you are looking for biotech cover in your portfolio, it may be worth taking a look at what Jeff Brown is recommending – but don’t forget that these are not personalized picks and the decision to invest solely rests with you.