Wondering what Jeff Bezos’ Big Bet is and whether it could be bigger than Amazon?

James Altucher, who is best known for publishing the bestselling book called Choose Yourself, released a presentation via his publishing firm touting Jeff Bezos’ Big Bet.

He assures his audience that if they missed out on Amazon’s other ventures, they may be in time for Jeff Bezos’ next big project that can double or even 10X their investment over the long haul.

In this review, I highlight the main points he raised in his presentation to help you to decide whether you should take him seriously. Keep reading to learn more.

What is Jeff Bezos’ Big Bet? (The Pitch)

It centers on a prediction by James that on January 29th, Amazon Inc. will reveal a massive global innovation during an event it will be hosting for its sellers. The innovation is meant to boost their businesses and create a long-term opportunity for investors to 10X or even 20X their money. He believes that the innovation will be bigger than Amazon’s eCommerce business, Amazon Web Services, and Amazon Prime.

The innovation he is talking about concerns Amazon’s plans to launch a constellation of low earth orbiting internet-beaming satellites. He calls it “StarNet Universal Internet” or “StarNet.” 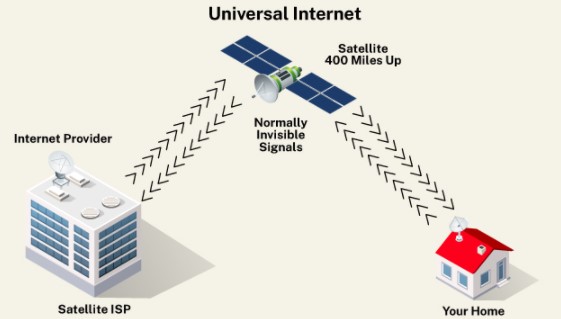 We have encountered pitches by other analysts before that have been about other tech companies launching such a project. Case in point, Ray Blanco did a pitch called Apple’s Greatest Breakthrough Yet and Jeff Brown did another titled What Is The Apple Super Cycle and they were both about Apple launching a constellation of internet satellites.

Therefore, the idea to launch internet satellites into orbit hasn’t only been taken up by Amazon. Companies like Facebook, OneWeb, and SpaceX have also worked on similar projects and even started launching their satellites.

The idea behind satellite internet is to have a constellation of low-earth orbiting satellites that beam the internet to devices without requiring antennas and cables. It is considered a solution to universal internet connectivity because the satellites can hover over remote locations where you cannot practically install internet masts or cables; think deserts, oceans, and other vast uninhabited expanses.

So, how does he want investors to profit off of this? We will address that in a bit but first, let’s take a closer look at the guy behind the presentation.

Who is James Altucher?

James Altucher is an angel investor and entrepreneur.

He is the author of a bestselling book called Choose Yourself! It is a self-improvement book that encourages people to deal with adverse economic conditions by harnessing “new tools and economic forces” to create new opportunities

Altucher has started 20 companies out of which only three have survived – he claims to have learned precious lessons from his failures.

Altucher also runs a podcast that has been downloaded over 40 million times.

How to make money off of Jeff Bezos’ Big Bet

Rather than encourage you to invest in Amazon, Altucher believes that you will be better served by focusing on smaller companies that will benefit from the project.

He argues that since Amazon is already a massive company with a valuation of $1.5 trillion, there isn’t much room to add to its bottom line and it will take years for its value to go up by even 50%.

His solution is to focus on smaller companies and as he puts it:

The real money is in finding smaller companies that will benefit off these massive technology shifts.”

James has his pick of “tiny companies” that he would advise you to consider. He has narrowed them down to two companies:

“But I’ve identified not one, but two tiny companies that I believe will ride the coattails of Amazon…

And benefit hugely from ‘StarNet.’

If I’m right, these companies could explode by billions of dollars within a couple of years”

So, what are these small companies he is teasing?

He offers the following description of his first pick:

And while few people know this company’s name—

It solves one of the biggest challenges companies like Amazon face when launching satellites.”

He reveals that it makes “radiation-hardened” electronic components that can withstand the harsh environment of space. He says that it may win the contract because it has worked with Amazon before:

“You see. this company is no stranger to Amazon…

In addition to Amazon, it has also worked with companies like Airbus, Boeing, and the US government, all of whom it has supplied with “components and systems” before.

It recently went public and Altucher says that its value doubled in less than 100 days.

The second company is in the space junk removal business. Space debris is a major problem that space explorers are having to grapple with. Here is how James describes the firm:

They are working on a robotic arm that will pull out dead and abandoned satellites and other debris out of the way of active satellites.

He doesn’t reveal its connection to Amazon but we can assume that it will get more business as the internet satellites are launched.

What is Altucher’s Investment Network? (The Newsletter)

How is all this linked to Altucher’s Investment Network?

Since he doesn’t explicitly name the two tiny companies in his presentation, James prepared a report called Jeff Bezos’ Big Bet: Retire Rich on StarNet’s Universal Internet Revolution that he wants to give away for free to people who become members of the newsletter. In it, he names the two companies and includes all the details you need to take advantage of the opportunity.

Altucher’s Investment Network is an investment newsletter through which he reveals “undervalued… little known investments… far from the beaten path of Wall Street.”

He says that it takes a lot of work to reveal those investments; he sifts through thousands of annual reports and balance sheets and usually travels to numerous countries.

If you sign up for the newsletter for one year, you will be entitled to:

In addition to revealing the aforementioned two companies to new members of the advisory service, he also wants to reveal to them an investment opportunity that has to do with space mining the moon’s topsoil. For this, he has written a report (that members can access for free) called Lunar Mining – An Exclusive Guide To Exploiting a Quadrillion-Dollar Opportunity.

He also talks about another opportunity in “space manufacturing” that he intends to reveal to subscribers through another report called The Advantage of Micro Gravity: A $1 Trillion Investing Strategy That’s Truly Out of This World.

How much do you pay to join Altucher’s Investment Network?

Yes. You have 6 months to give it a spin during which you can cancel your membership for a full refund.

When James Altucher released the presentation we have been referring to as Jeff Bezos’ Big Bet, he wanted to promote his newsletter, Altucher’s Investment Network. In the process of doing that, he teases two small companies that will benefit from Amazon’s plan to launch internet satellites into orbit.

He tells us that Amazon intends to launch those satellites to dominate the fledgling market that so far has a few players involved; including Facebook, SpaceX, and OneWeb (and possibly Apple).

As you consider following Altucher’s advice, it is important to remember that we may be a few years away from realizing the full potential of these projects because we are in uncharted territory. Therefore, it may not be easy to point out the best companies to invest in.

That being said, even if you won’t follow James Altucher’s recommendations, you may have learned something from his pitch that may influence your investment strategy.