Nick Giambruno, an editor at Casey Research, recently put out a presentation where he was talking about a novel form of investment that takes advantage of the Bitcoin rally without having to buy the cryptocurrency.

It has to do with a group of stocks he calls ‘Bitstocks’ that are affiliated with the market. In the header, it reads:

In this review, we will be taking a closer look at them to learn more about Nick’s assertions and investment strategy.

Nick Giambruno’s presentation on Bitstocks centers on a group of stocks that are linked to Bitcoin. Before we even go further with this, I should point out that ‘Bitstocks’ are companies that mine Bitcoin. 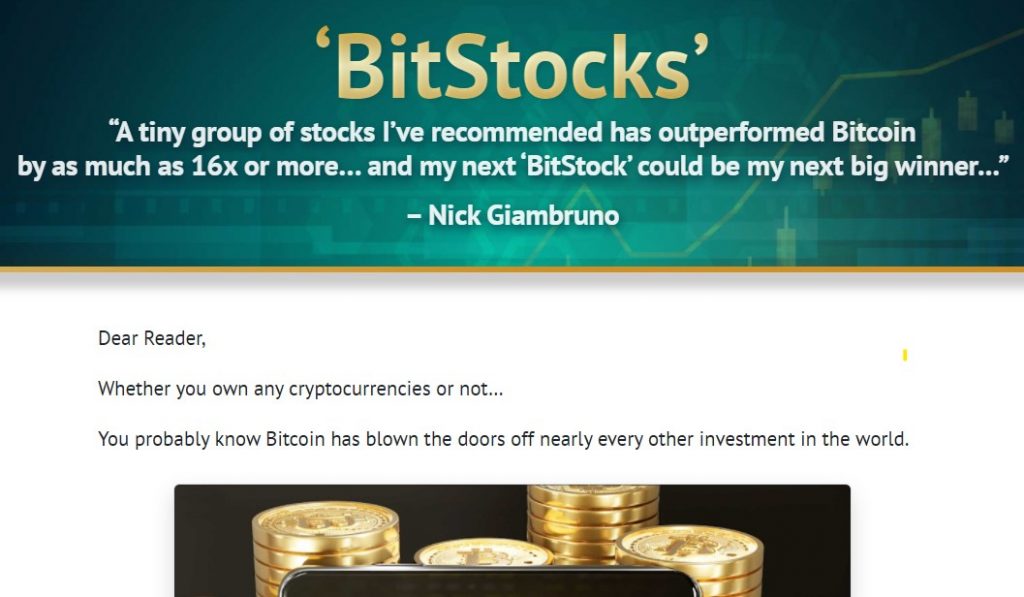 He says that they are tied to the price of Bitcoin but they have outperformed the cryptocurrency over the past year.

We’ve seen investment gurus scramble to give us their version of how we should navigate the cryptocurrency market and I have reviewed presentations like The Crypto Effect by Jeff Brown and Eric Wade’s Crypto Cash Summit on the same.

Going back to the presentation, Nick claims that as the price of Bitcoin has gone up in the past year, the prices of these stocks have also gone up even higher:

“Since March of last year, the world’s top cryptocurrency has exploded higher.

Nick clarifies that when he is talking about ‘Bitstocks,’ they have nothing to do with Bitcoin ETFs, smaller cryptocurrencies (altcoins), or Non-Fungible Tokens (NFTs).

He also adds that very few people know they even exist because they are much smaller than Bitcoin, which has been stealing the headlines since it started skyrocketing a little over a year ago.

Even as he champions ‘Bitstocks,’ Nick Giambruno is still not discouraging us from buying Bitcoin. He says that it is a solid investment, only that ‘Bitstocks’ are better:

“There’s no doubt in my mind buying and holding Bitcoin could make you substantial profits.

But if that’s all you do…

You might miss out on the biggest, fastest gains.

I’m talking about moves, like 5 times… 10 times… and even 16 times higher than Bitcoin itself!”

So, he thinks ‘Bitstocks’ will earn you multiple times the returns you could get by investing in Bitcoin.

How to invest in Bitstocks

Nick says that to invest in Bitstocks, you don’t have to buy cryptocurrencies. You also don’t have to take on leverage or trade options. All you need is a typical brokerage account because they are just stocks.

Although Bitstocks are companies that mine Bitcoin, Nick is not saying that we should go for any miner.

He recommends companies that mine Bitcoin in a way that conserves energy. This is because Bitcoin is energy-intensive, something Elon Musk pointed out in one of his Tweets. 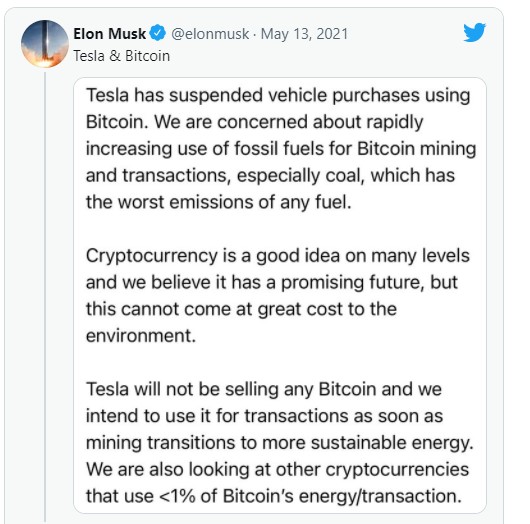 Here is what Nick points out:

“The #1 cost of mining Bitcoin is not picks and shovels… or even fancy supercomputers… or the sprawling, air-conditioned warehouses where it all takes place.

That’s more electricity than the country of Sweden.”

Since more of Bitcoin is continuously being mined, he expects even more energy to be spent on mining. And that’s why he thinks Bitstocks have an advantage because they can secure cheap power. In doing so, he expects them to dominate the market and make their backers rich.

Nick says they will be using oil that is typically burned at the wells because the oil miners have no idea how they will deal with it.

“…it just so happens there’s a LOT of energy that’s stranded.

In other words, there’s no way to get it from the source to a customer. It’s too far away.

There are no railroads…

No way to get it from point A to point B.

And what does the oil industry do with all this worthless energy?

Instead of freely venting it into the atmosphere, the oil industry uses a technique called ‘flaring’ to rid wells of excess natural gas.

Essentially, what they do is ignite the gas… and burn it off in a huge fireball – to the tune of more than 750 billion cubic meters per year.

That’s enough to power the entire continent of Africa – burned off and wasted.”

And this is where Bitstocks provide a solution. These companies take away all the extra energy that would otherwise be burned up and use it for Bitcoin mining. They set up their Bitcoin mining operations in those remote locations. 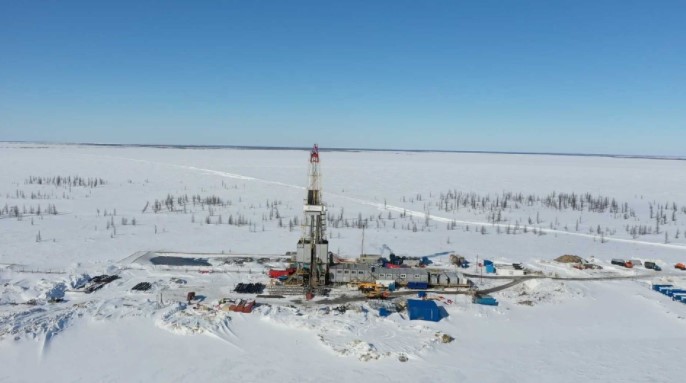 Nick says that he has identified a tiny group of Bitstocks that could hand investors up to 50 times their money.

One of the companies he has recommended is Gazprom Neft (OTC: GZPFY).

He says that on the surface, it appears to be in the energy business but based on new programs it launched, it could easily become a top Bitcoin miner. And there are others like it that he wants people to consider investing in now that they are cheap and unnoticed.

Out of the tiny group of Bitstocks Nick Giambruno is pumped up about, he has one that he considers a favorite. Here is what he reveals about it:

“It’s based in a cold region of Canada where energy is cheap and reliable, thanks to wind and natural gas.

At just under 2.5 cents per kilowatt hour, its energy expenditure sets it apart from nearly every other BitStock in the market by half!

But my #1 BitStock also has another advantage over the competition…

The company has inked an exclusive deal with an all-in-one, turn-key hardware supplier.

In other words, they have a strategic partnership with the manufacturer of their most crucial equipment – something most Bitcoin miners lack.

Fidelity International, one of the world’s leading investment and asset management companies, has taken a huge 9% stake.

Speaking of its leadership team, here is what he says about it:

“With more than 25 years of experience, its leadership team has recently signed a massive contract that will add more than 5,000 mining machines to its operations.

In other words, it’s a fast-growing company with an aggressive and experienced management team.

And with a tiny market cap of only $23 million, they have a ton of room to blossom into a high-flying BitStock.”

He has put all the details concerning this company in a special report called Flaring BitStocks: Explosive Gains on One Tiny Firm at the Intersection of Big Green, Big Government, and Big Oil. 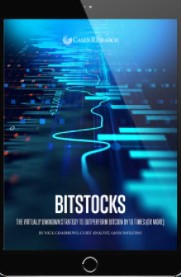 To get a copy of the report for free, you have to join a paid newsletter Nick edits called Crisis Investing.

Nick Giambruno used to work at an investment bank in Dubai ten years ago when he met Doug Casey in Beirut. Doug is the founder of Casey Research.

Nick joined the firm and since then, he has been traveling the world together with Doug Casey uncovering investment opportunities.

Nick Giambruno writes about value investing in crisis markets because he is a big fan of investing when there is “blood on the streets.” He also writes about the global cannabis market, international banking, second passports, and surviving a financial collapse.

Crisis Investing is a contrarian financial newsletter that focuses on opportunities that arise when the markets are in turmoil. 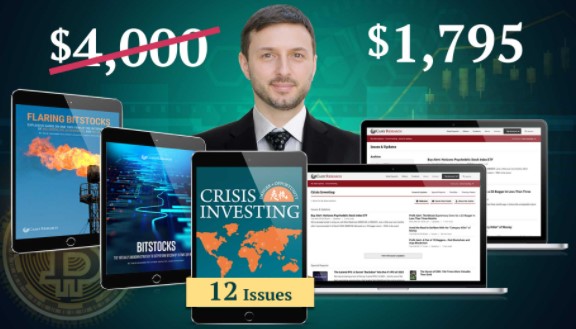 Nick Giambruno says that when running it, he leverages his and his team’s experience and vast book of contacts to dig up investments before Wall Street and the general public are even aware they exist.

When you join, you receive:

You also get the following special reports for free:

How much is Crisis Investing?

Although the usual subscription fee is $4,000, you get to join for just $1,795 plus applicable taxes if you do so through the link at the end of the presentation.

Crisis Investing does not have cash refunds. There is NO REFUND POLICY. 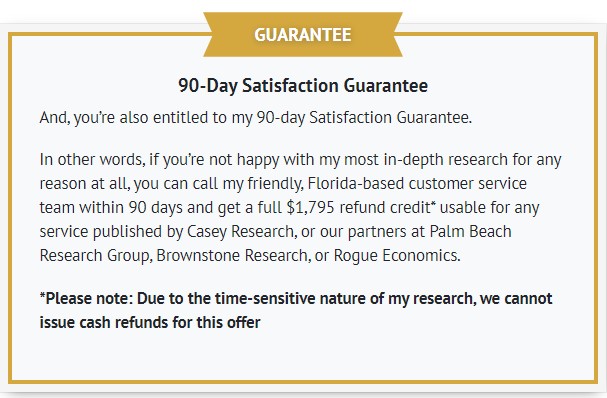 What they have instead is a satisfaction guarantee that lets you cancel your membership within 90 days. You can then sign up for any other newsletter offered by Casey Research, Palm Beach Research Group, Brownstone Research, or Rogue Economics.

Nick Giambruno believes that Bitcoin will keep going up. But even as you invest in the cryptocurrency, he thinks you should also consider going for the Bitcoin miners that will use the oil that goes to waste when oil miners have no idea how to handle it. He claims that these companies could soar 5x… 10x… or even 20x higher.

He considers it a good model because these Bitcoin miners will have access to cheap power, a critical factor that determines whether a Bitcoin miner will do well.

That being said, I think you should do more research on these stocks before you follow Nick’s advice because things may not work out as he tells us. Another problem with these stocks is that they are quite small, and we all know how volatile and risky they can be.