Eric Fry has been promoting a presentation he did called The Wealth Acceleration Summit.

At the event, he talks about a new technology that he thinks will widen the wealth gap in a major way.

In this article, I walk you through the pitch revealing what new technology he is talking about and the investments he is proposing.

The Wealth Acceleration Summit is a presentation presided over by Eric Fry and published by InvestorPlace where he reveals his investment strategy. 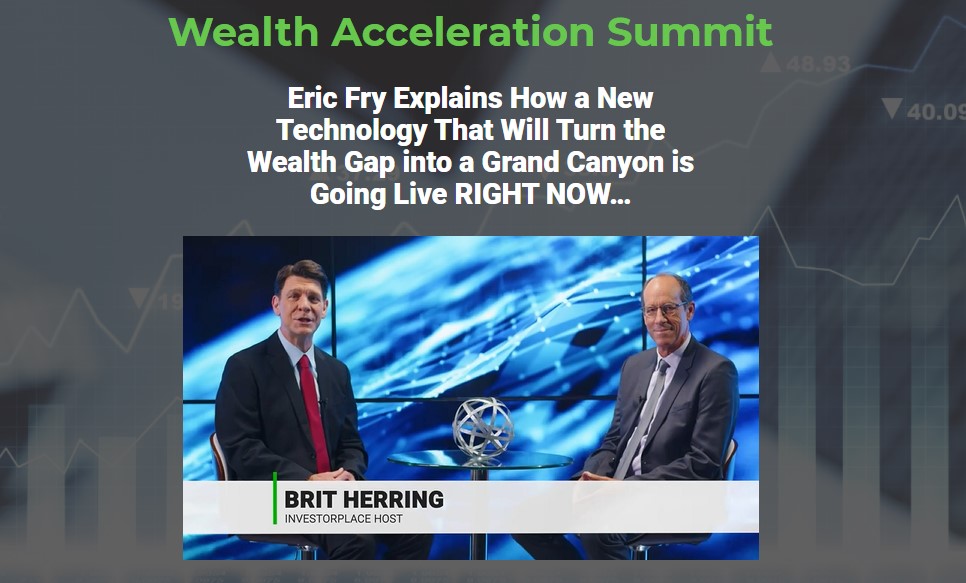 After watching the presentation, I noticed similarities in his messaging with what he said in another webinar he did a while back titled “The Technochasm Summit” which had millions of views. In that webinar, he was discussing how making certain investments made the rich even wealthier and widened the wealth gap during the pandemic.

At the Wealth Acceleration Summit, he correctly points out that in 2020, the best-performing stocks in the stock market were in the biotech, electric vehicle, and bitcoin mining industries. But he says that their success was driven by a secret that few Americans understand.

This secret boiled was “The Law of Accelerating Returns.”

The Law of Accelerating Returns was advanced by a futurist called Ray Kurzweil where he described it as the tendency for advances to feed themselves, increasing the rate of further advances pushing beyond what was previously predicted by linear extrapolation.

Eric Fry says that this law is manifested in the manner in which technology has advanced. He says that it explains why some companies are growing at faster rates than they would have in previous eras. He says, and I quote,

“Well, as Kurzweil explains, technology does not progress in a linear, step-by-step manner…

Instead, the speed of progress… and the speed at which people adopt new technologies, actually ACCELERATES over the years.

In other words, technology progresses ‘exponentially.'”

Eric also believes that it goes both ways because well-known companies that fail to adapt are collapsing at a similarly fast rate.

He thinks that this has made the wealth gap widen the way it has over the past year.

He also claims that disruptions typically happen from the outside. Here is how he explains it:

“One of the most important things you have to remember about The Law of Accelerating Returns is that disruptions ALWAYS happen from the outside.

What I mean by that is, it’s NEVER the big, established companies that disrupt entire industries, and make people rich, in a very short amount of time.

Neither Motorola nor Nokia developed the smartphone… but they could have.

Netflix was not invented by Blockbuster… but it should have been, right?

Eric says that only a small percentage of the population understands the impact that the law of accelerating returns has on the way different investments perform. And he wants to help you find those investments.

The kind of investment he is talking about is in small tech companies that cause those disruptions from the outside. He says that if you can identify those before they soar, you will be set:

“Again: It’s the small “outsider companies” that disrupt the status quo and make a small group of investors wealthy.

You simply must learn how to identify these game-changing companies if you want to capture the biggest gains in the market today.”

Eric says that he has found the “newest industry that’s benefiting from the Law of Accelerating Returns.”

The New Industry Eric Fry Wants You To Take Seriously

Eric Fry claims to have found a “new platform” that could have an impact similar to the introduction of electricity or the internet. He claims that it will change the way we live, work, and relate with each other while also affecting economies and benefiting societies.

The platform he is talking about is 5G.

Last year, we saw many gurus in presentations like The 5G Tollbooth Firm and The 5G Keystone Stock come out and say that 5G would be the best investment but the topic cooled off when Bitcoin and cryptos took center stage.

So, what Eric Fry is saying has been said numerous times before.

He echoes what we’ve seen being said by other gurus when he says that he doesn’t see 5G as merely an upgrade from 4G but as a new kind of network. He says,

It will transform existing industries—and create entirely new ones at the same time.”

Therefore, he wants us to invest in 5G-related companies.

The recommendation he reveals in the presentation for free is a company called Akamai Technologies (AKAM).

He believes that it is going to do well during the 5G rollout because it is a leader in edge computing and it has quietly become a leader in network cybersecurity.

Eric says that he has other recommendations that you can only access if you sign up for his newsletter, Fry’s Investment Report.

Who is Eric Fry?

Eric Fry is one of the investment gurus who work for Investorplace, one of the oldest financial research firms of its kind in the industry. 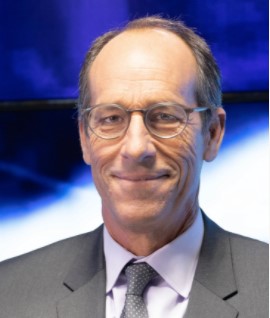 He specializes in international equities, something he’s been doing for nearly two decades. He was also a professional portfolio manager for a decade where he focused on short-selling and international investment strategies.

Following his success as a trader, he was hired by James Grant – who’s known for Grant’s Interest Rate Observer – to produce Grant’s International and Apogee Research. They were both research products geared for professional money managers.

Eric Fry won the Portfolios with Purpose competition in 2016 after beating 650 of the biggest names on Wall Street with a return of 150% over 12 months.

Eric is known for his impressive long-term track record, including numerous calls that resulted in big gains such as buying Asian Stocks during the Asian Financial Crisis and buying Russian stocks during the country’s debt-currency crisis.

He has also done well on the short side as he has made predictions like the ones he made in 2005 and 2006 when he said that the housing boom would be over, driving mortgage firms into bankruptcy.

Fry’s Investment Report is the main premium newsletter that Eric Fry publishes via InvestorPlace. Through it, he shows investors how to stay on top of the best new companies in a megatrend.

For example, he says that he has covered the energy storage trend and revealed a company whose batteries are better than the Lithium-ion batteries we use today. He has also talked about a company that will thrive in the electric vehicles space and another that will do well amid the SPAC trend.

He says that when you sign up, you get:

He singles out two reports that are relevant to the discussion about 5G. The two are:

In this report, he says that his research has uncovered a lot of doomed companies. Many of them are “ticking time bombs” that he thinks will be devastated by a 5G rollout. 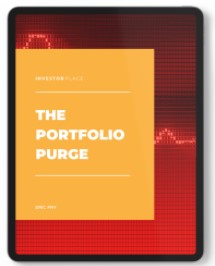 He believes that if you own them, you will miss out on the biggest gains.

In the report, Eric names over a dozen well-known companies that he thinks you should avoid. He says that you should purge your portfolio of them and avoid them in the future no matter how cheap they get.

5G Plays Every Investor Should Own

He says that he doesn’t recommend Verizon or AT&T or T-Mobile because he thinks that big and profitable technology disruptions always happen from the outside. 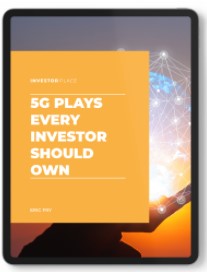 In this report, he reveals what he considers to be the most exciting 5G stocks in the world.

“One of these firms, for example, not only just signed major deals to expand T-Mobile’s 5G network and Google Cloud’s 5G capabilities, but it is also ranked #1 for ownership of 5G patents.

Another company is at the cutting edge of 5G technology—selling powerful new hardware that can transmit 25 HD movies in just a single second.

A third might just be the biggest winner of the drive to cut China’s Huawei out of building national 5G networks. Leading telecoms in Germany, Canada, and the UK have picked this company to build out their 5G infrastructure, with potentially more to follow.”

All the details about those companies are in the report.

An annual subscription to Fry’s Investment Report is $99 if you join via the link at the end of the presentation, down from the regular price of $199.

Fry’s Investment Report comes with a money-back guarantee that states:

“MONEY-BACK GUARANTEE: There’s simply no better deal in the investment world — and if you disagree with me for any reason, simply let us know in the next YEAR – that’s 365 days —  and you’ll receive a full refund.”

Eric Fry’s Wealth Acceleration Summit gives Eric the chance to reveal his investment strategy. From what I saw after watching the video, he is proposing that we invest in new tech companies that are scaling faster than ever before creating massive wealth in short periods; a concept called The Law of Accelerating Returns.”

These are relatively small tech companies that are disrupting entire industries.

The focus of the presentation was 5G, which is making a comeback in newsletter circles. Many gurus have been talking about it in glowing terms, describing it as a revolutionary new technology that will change people’s lives and make investors very rich.

Will 5G-based companies make for good investments? It is hard to tell right now because the rollout is just getting started. However, if it happens, it will probably take years.