If you have encountered the “2020 CryptoMillionaire Summit” by Matt McCall and Lauren Sivan, you have heard of Ultimate Crypto.

In this article, I will walk you through the key talking points of the summit as well as outline what the Ultimate Crypto is supposed to help you accomplish.

What is Ultimate Crypto?

Ultimate Crypto is Matt McCall’s new cryptocurrency advisory service. It is published by InvestorPlace. He launched the service in a presentation that was titled 2020 Crypto Millionaire Summit. 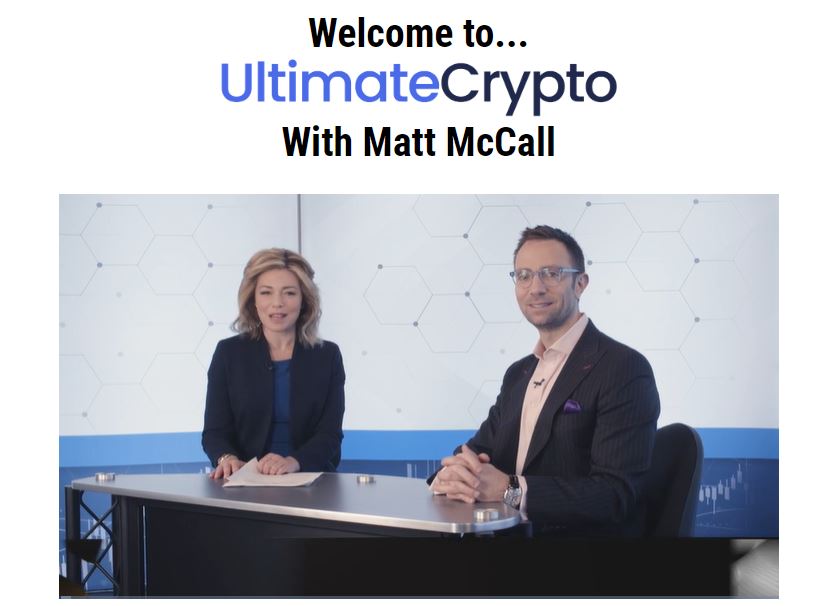 The service is based on a new investment strategy that aims to make the most of the “halvening” event. As he explains it, it is expected to increase the prices of cryptocurrencies significantly (more on that shortly).

He goes as far as saying that prices could reach the highs of 2017 during the bubble.

With a sudden rise in prices, a small investment may generate massive capital gains that may reach hundreds of thousands if not millions of dollars – this, of course, depends on the amount of money you put into it.

When you join the Ultimate Crypto, he will encourage you to stay away from Bitcoin because it is already too expensive. Instead, he will suggest that you invest in the smaller digital currencies; altcoins.

Matt McCall is an investment analyst at InvestorPlace. For ten years now, he has been analyzing stocks and other securities and advising his readers on the best ETFs and stocks to buy.

He started his career on Wall Street 17 years ago when he was recruited by Charles Schwab as a stockbroker. He then went on to form his own investment advisory company, the Penn Financial Group.

The firm provides individual investors with investment advice to enable them to fulfill their financial goals.

He has written two books on investing. The first one, The Swing Trader’s Bible teaches people how to capitalize on market fluctuations and the second, The Next Great Bull Market, introduces an approach that encourages investors to concentrate their investments in areas that will benefit from global changes.

Halvening is an event that happens in the global cryptocurrency market periodically. As Matt puts it:

“The Halvening is an event that happens once every few years with bitcoin. It’s written into its code.”

It has to do with entities called miners. Bitcoin miners are people or organizations that use complex computer programs to solve complex mathematical problems on the cryptocurrency’s network; the blockchain.

A blockchain is a decentralized, distributed ledger that maintains records of digital assets. I will not delve too much into it as that is not within the scope of this article, but I have attached links above that will do a better job explaining how the technology works.

Going back to the “halvening,” when a miner solves a problem, they are said to have mined a block on the blockchain. They are rewarded with a Bitcoin (full or partial).

When 210,000 blocks are successfully mined, the amount of Bitcoins that a miner typically receives for their contribution is reduced by half; hence the name “halvening.” As Matt explains:

You can think of it as a reduction in the NEW supply of Bitcoin by half.

This usually happens roughly every four years to mitigate inflation and the erosion of Bitcoin’s value.

There is an ongoing debate as to whether the 2020 halvening will cause a significant price change as it did previously. Skeptics believe that the shift has already been priced in.

Why Matt wants to invest in Altcoins

An Altcoin is a cryptocurrency that is not Bitcoin; simply, all the other cryptocurrencies. Like Bitcoin, they are built on the blockchain.

Bitcoin is significantly larger than Altcoins. Matt likens Bitcoin to a large-cap stock and Altcoins to a small-cap. He says that investing in a good altcoin now is like investing in a unicorn company at its early stages:

“Yes, there is one more thing. The situation with altcoins right now reminds me of what it was like to invest in Apple in 1980, Netflix in 2002, or Uber in 2010. It’s a once-in-a-lifetime opportunity we may never see again.”

He thinks that retail investors should invest in Altcoins for the same reason that they would invest in penny stocks: They are smaller, cheaper, and more volatile.

Since there are more cryptocurrencies now, he expects the upward pressure in prices to be considerably greater:

Since the market is more crowded now, it is tougher to pick the right cryptocurrencies to invest in.

To find the right altcoins, Matt has a proprietary 10-point system with which he grades them. He doesn’t reveal the metrics of his system and instead reserves that for his paying subscribers.

“Well, with the help of my government insider friend, I’ve created a 10-point system that grades the best altcoins to invest in right now. This cryptocurrency system does all the leg work — it gives us an updated ranking of the 30 best altcoins in the world. It separates the frauds and charlatans from the real technology ventures that are changing our economy.”

However, he lets us in on the most important element of his system: Total Addressable Market (TAM). It finds the digital currencies that are likely to impact most people in a meaningful way while avoiding small niche cryptos with a narrow reach.

“T.A.M. is probably the single most important element for predicting future success.

It’s just like any other early-stage venture — the more people it can impact and help, the more money will be made.”

What you get when you Subscribe to Ultimate Crypto

If you subscribe to the service, you will gain access to Matt’s model portfolio. Matt calls it the Four Weeks to $4 Million Portfolio.

It is a list of the best altcoins to invest in when you want short-term or long-term gains.

In addition to the portfolio, you will receive monthly updates on the state of the cryptocurrency market. He and his team update the portfolio to reflect new changes.

He also sends you a guide on investing in cryptos. It is titled Cryptocurrency Investing for Beginners.

While the Ultimate Crypto service was promoted based on the halvening event, it has more to it than help you make money once. It is an ongoing service that Matt wants to use to share advice.

The cryptocurrency market has always been seen as unpredictable; characterized by massive volatility. People lose money just as fast as they make it, especially when dealing with Altcoins. Matt wants to guide new investors to enable them to make money from a market many struggle to understand.

As for the halvening event, it has already happened as I write this (it happened a month ago). Bitcoin rose by around 50% and has managed to hold onto those gains ever since. Matt was right about that, at least.