I recently stumbled across a presentation by Jimmy Mengel with the header “Trump’s Final Executive Order.”

Right from the off, it was pretty clear that it was about investing in 5G stocks; although Jimmy had decided to make the conversation about the dominance of “Communist China.”

His decision to talk about investing in 5G is not novel because, over the past year or more, investment analysts have been pining over companies that have any connection to 5G, heralding them as the best investments.

In this review, I will walk you through his presentation as I highlight the main talking points. After reading this, you should have a gist of what Jimmy is talking about and proposing.

What is Trump’s Final Executive Order? (The Pitch)

Trump’s Final Executive Order is a presentation that was released by the Outsider Club and presented by one of its senior analysts, Jimmy Mengel.

Although it was meant to promote the Crow’s Nest, an investment research service offered by The Outsider Club, it is also about investing in 5G companies. 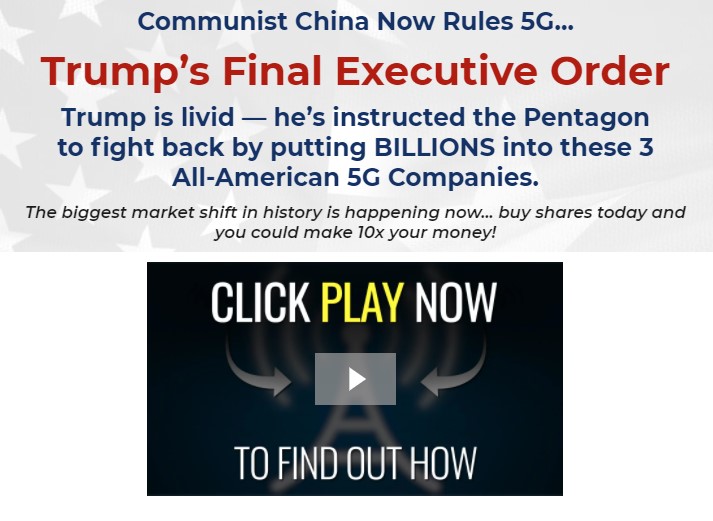 Jimmy starts things off by talking about the Chinese tech giant, Huawei. He holds up one of the phones it makes and tells us that China uses them to spy on American citizens. He says that Huawei phones such as the one he has usually route secret signals regarding user location to China where this data is recorded at a top-secret computer facility in Beijing.

The discussion then segues to the dominance of China on the 5G front:

“This phone — and the 5G technology it contains — has become the DECIDING battleground between the two most powerful countries in the world.

And I have some bad news: up to this point China has been winning, and America is on the ropes.”

China’s dominance in this arena is usually attributed to the emergence of Huawei as a leading supplier of the 5G infrastructure. There is a general unease when Chinese companies have control over something as strategically important as 5G infrastructure because the Chinese government can oblige them to turn user data over to it (the Communist government) if it deems it necessary.

That explains why Jimmy has one of his subheadings reading “China is trying to rule the world through this tech company – We’re not going to let it” referring to Huawei’s dominance.

He even touches on the diplomatic tensions that escalated between China and the West when Canada arrested the daughter of Huawei’s founder:

“During Trump’s administration, the daughter of Huawei’s founder was accused of illegally selling 5G technology to Iran… which not only made Iran’s 5G network more advanced than ours, it also gave Iran the ability to spy on everyone — including its own people.

She was flying through Canada on a trip to Mexico City, where she was planning on meeting with Mexico to discuss 5G towers on our southern border.”

Jimmy goes on to say that Huawei’s dominance has gone beyond 5G towers because it overtook Apple and Samsung to become the world’s leading smartphone manufacturer. He says that it took advantage of the slump other phone makers went through during the pandemic.

Jimmy tells us that the US has been handed a lifeline because the government has taken measures to wrestle control from China (and he believes these steps will benefit American companies).

Key among them is Executive Order 13873, which he says Trump renewed before the election:

“The instructions of the executive order are simple: Huawei is banned, and a short list of U.S. 5G companies will receive the full support of the U.S. government to help keep Huawei out for good.”

He goes on to say that the fight against Huawei will spark five market-shifting catalysts that will shake up the industry:

And this is where the presentation moves on to the three companies that he wants investors to consider.

And so this company is going to be the first company to take off, since it’s the first up at-bat…

It’s been mentioned by name at the Pentagon as the go-to company to install thousands of new, next-generation 5G towers that’ll keep China out of our airwaves.

“This company holds more than 4,200 patents, and it’s the U.S. government’s top pick for the processing chips, antenna receivers, and signal boosters used in our new 5G system.

All of its components are designed in the U.S. and built through safe supply chains we can control — ensuring security from the hardware up, something 3G and 4G never had.

This company is a one-stop-shop. It designs it, oversees its production, and provides for its maintenance.

It’s the ONLY 5G supplier in the world to make every single part in the system — from the power converters on the ground… to the tip-top of the antenna array.”

“It’s smaller than the other stocks, but it’s the one that’s holding the indispensable key to new, secure 5G network technology.

It was the FIRST and ONLY small-cap stock to be added to the original consortium, back when it was just IBM, Intel, Google, Verizon, and a handful of others.

This company has only 800 employees… but its entire business is creating the architecture for a network like this.

All the big boys are there to add their input — but it’s this company that’ll build the high-capacity 5G routers that make it all work.

It already holds most of the patents…

And it’s been mentioned by name by the Secretary of State, the Pentagon, and the Congressional officials in charge as the company that will have the most impact on defeating Huawei.”

I couldn’t accurately determine the names of the three companies, but Jeff has compiled a report titled Battleground 5G: Make 10x Your Money on the Three Companies Fighting to Keep China out of America’s Airwaves.

In it, he has provided the names of the three companies as well as their stock symbols. To get your hands on it, you have to sign up for his newsletter, The Crow’s Nest.

Who is Jimmy Mengel?

Jimmy is the leading editor of one of the newsletters they publish called the Crow’s Nest, which is the subject of the presentation – we will take a closer look below.

Mengel has been recommending cannabis stocks since 2014, back then, they were not a hot topic. He is the investment director of the Marijuana Manifesto, through which he discusses the prospect of investing in marijuana stocks.

His focus, besides cannabis stocks, is long-term retirement investing and dividend reinvestment plans.

What is The Crow’s Nest? (The Newsletter)

The Crow’s Nest is an investment research service that is published by the Outsider Club and edited by Jimmy Mengel. If you sign up for the Crow’s Nest, you receive:

Mengel will also send you a research report called The Tesla Killer: Make Massive Gains on the Fuel Cell Revolution. It is about fuel cells, which he believes will be a better energy alternative to gasoline than the battery technology used by Tesla.

He will also send you another bonus report called The Boom Stock that Will Transform America’s Cannabis Production. In this report, the discussion centers on a Colorado-based cannabis stock that will soar when demand for marijuana rises – according to Mengel, this rise in demand will be caused by a renewed push by States to legalize cannabis to increase their tax base.

How much do you pay to join The Crow’s Nest?

Trump’s Final Executive Order is a presentation by Jimmy Mengel designed to advertise his newsletter, the Crow’s Nest. At the same time, he talks about the dominance of Huawei in the 5G race and enumerates the consequences this has on the country.

He also talks about the government’s plan to counter the Chinese dominance, citing an executive order that President Trump signed before the elections. He discusses the domino effect of the executive order and explains how American companies will benefit from that.

He has narrowed down his stock picks to just three that he believes will soar and promises to reveal them if you sign up for his advisory service for $99 per year.

Are his stock picks likely to do well? It is hard to tell because the 5G rollout will take time; anywhere from a few months to a few years.