Money Map Press has been promoting a presentation that was done by Tom Gentile a while ago with a header that reads, “New Crypto Bull Market Trade Is Creating Profits 20X Bigger than Bitcoin.”

Tom’s premise is that he has a special crypto trade that can make you 20 times the profits you are bound to make trading Bitcoin.

In this piece, I will summarize the pitch for you to enable you to better understand Tom’s approach and what to make of his proposals.

What is 20X Bigger than Bitcoin? (The Pitch)

20X Bigger Than Bitcoin is the title of a presentation that Tom Gentile released to promote his newsletter, Microcurrency Trader.

This isn’t the first time he is pitching it; he also released another presentation called Largest Economic Shift in Society a few months ago.

Although he tells us to buy and hold Bitcoin for the long haul, it is not the focus of his presentation because he says that there is an even better and faster way to make money during the 2020-21 cryptocurrency boom.

He says that rather than investing in Bitcoin, we should invest in a special kind of crypto he calls Profit Multiplier Trade. With this trade, you can multiply the gains you’d get owning Bitcoin 20-fold.

To give credence to his argument, he gives the example of 2017, the year when the digital currency market was booming. He compares the performance of Bitcoin with some altcoins saying:

But these little-known cryptos shot up in total valuation by an astounding 16,695%.”

The takeaway from that is that as Bitcoin did well, those little-known cryptos did better, albeit in shorter bursts. Some of them did many times better hence the term “profit multiplier trades.”

Now he expects the new bull market to set up a bunch of Profit Multiplier Trades that will earn you bigger returns than Bitcoin in the short term. He also expects this market to be bigger than the 2017 crypto bubble for three reasons:

PayPal is an online payment platform that boasts up to 346 million daily transactions. It has started embracing crypto transactions:

“And for the first time ever, PayPal is going to allow their users to pay for anything they want using cryptocurrency instead of dollars.”

It allows clients to convert fiat currencies to crypto and back thus enabling them to transact seamlessly using both. Tom expects this to prompt competitors like Visa and MasterCard to also hop on the bandwagon.

Big companies are also creating their digital currencies to allow for cheaper and seamless transactions with other businesses. Tom calls these currencies “smart contracts.”

Since the supply of cryptos is fixed and demand has been rising, they are not susceptible to inflation as we see in fiat currencies (I should point out that not all cryptos operate using this rule). A great example is Bitcoin, whose supply limit is set to 21 million.

As demand rises, so do the prices and this means that investors, including institutions, have been flocking to them to hedge their portfolios against inflation.

Tom says that he has a system that enables him to spot lucrative crypto patterns. He says that he built it with the help of award-winning scientists who hold 11 patents. Here is how he describes it:

“Together, we’ve built my most powerful toolset ever that combines a supercomputer… artificial intelligence… and quant-trading algorithms to spot crypto winners.”

At the heart of it, he says that it uses Fractal Waves, which he describes as mathematical patterns that infinitely repeat themselves. Concerning financial markets, he says that they are caused by extremes in investor psychology that lead to big upswings and downswings.

He says that these waves help detect tiny movements that can easily go undetected and to do that, it analyzes thousands of tiny cryptos.

It focuses on two fractal waves:

When the two waves cross, he says that it means that the price of the crypto is likely to go up, at which point, he makes his move. An example of this in action is shown below: 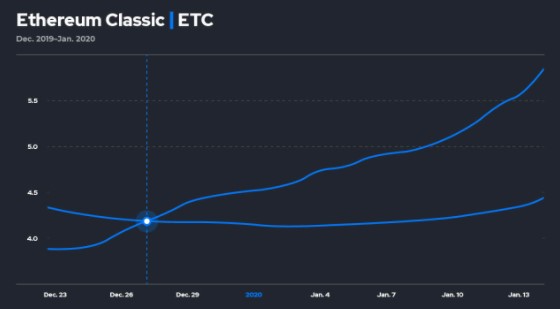 In this instance, he says that after the two lines crossed, he made a move for Ethereum. He cashed out 14 days later for a nice payday.

The Three Cryptocurrencies That Could be 20X Bigger Than Bitcoin

Tom says that his AI system has spotted three microcurrencies that have met his criteria.

The first microcurrency pick had a market cap of $3.3 billion as he was releasing the presentation. He describes it as follows:

“The first one is a microcurrency now growing wildly popular in the banking industry.

They let everyday individuals… AND institutions… collect interest on crypto assets without having to go through all the scuttlebutt you normally get with traditional banks.”

The second one traded at $6 as he was making the presentation. More on it:

“It’s a microcurrency that operates a sort of “internet” for crypto networks around the world.

Through its blockchain protocols, it allows various industries to communicate with each other and streamline transactions between them. It’s truly ingenious.”

And as for the third one, here is how Tom describes it:

“The third microcurrency I’m recommending was created by a company I call the ‘PayPal of Asia.’

And this crypto is geared up for a major run.

You see, in Asia, they don’t rely on credit cards as they do here in the States.

So folks in Asia with credit cards often have a hard time buying the things they want.

To solve the problem, this Asian payment processor came up with a microcurrency that allows folks to send money directly from their smartphones… without using credit cards.”

Unfortunately, I found those descriptions to be rather vague and thus couldn’t accurately identify the altcoins that Tom was teasing.

If you want to find out what their names are and can’t wait for someone to reveal them for free online, you have to read the report he wrote about them.

It is called 3 Profit Multiplier Trades for 20X More Money than Bitcoin and he will send it to you for free if you sign up for his crypto-based advisory service, Microcurrency Trader (which we dive a little deeper into later on).

In the report, he provides you with step by step instructions on how to make the three trades, how to set up a digital wallet, how to transfer money, and how to hedge it against the downside.

Who is Tom Gentile?

Tom Gentile is an options trader and cryptocurrency expert who is part of the editorial team at Money Map Press. He is one of the most prolific editors seeing as he runs up to eight newsletters.

Ultimately, his specialty is options trading. He taught himself everything he could about options while he was still living with his parents and later helped build an options education platform called Optionetics. He and his co-founders later sold it to a large discount broker firm for millions of dollars.

What is Microcurrency Trader? (The Newsletter) 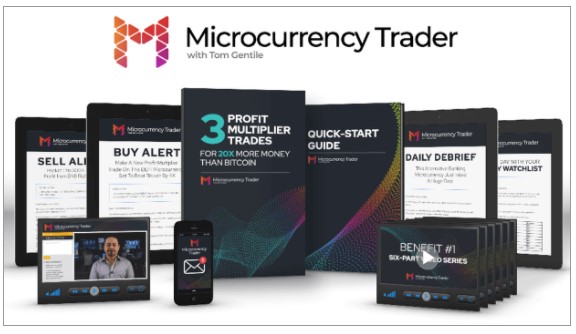 Microcurrency Trader is one of the investment advisory services that Tom Gentile edits at Money Map Press. He started it to provide retail investors with insights regarding the cryptocurrency market. His focus is on what he calls “microcurrencies”; which is just a term he coined when referring to Altcoins.

When you sign up for Microcurrency Trader, Tom promises to show you opportunities to earn triple-digit, quadruple-digit, and even 10-bagger gains within one year.

Here is what you get when you sign up for the newsletter:

Tom Gentile says that he can only take on 250 new members but I don’t think that will go through with it. I think he may be using that to create a sense of scarcity because it is a relatively expensive service. In the end, I think you will be allowed to join at any time you please.

How much do you pay to join Microcurrency Trader?

A one-year subscription will cost you $1,950

The newsletter has a refund policy although it has some unique terms as shown here on the signup page:

The main takeaway from Tom’s presentation, 20X Bigger Than Bitcoin, is that you should buy and hold Bitcoin as a long-term investment and use the smaller cryptocurrencies to earn short-term profits.

Nevertheless, Tom acknowledges that although altcoins can give you more bang for your buck, they also expose you to greater risk. And he is right about that because some altcoins can be extremely volatile, earning you big returns in a short period before later wiping away all your gains just as fast. Therefore, you should never invest more than you are ready to lose when you take a punt on them.