Over the past few days, Dave Forest’s Zero to Retirement Summit has been getting a lot of attention from his followers and fellow analysts.

It is an event during which he is to reveal how you can earn 49 years of stock market profits in one trade by trading warrants. He says that he will help you jump on Jeff Bezos’ latest move.

Let’s take a closer look at what the event is all about to determine what Dave Forest is proposing here.

What is Dave Forest’s Zero to Retirement Summit

The Zero to Retirement Summit by Dave Forest is a webinar during which he will reveal how you can make the same moves billionaires do. To be precise, he claims that he will show you “how to ride the coattails of Jeff Bezos, one of the richest men in the world.” 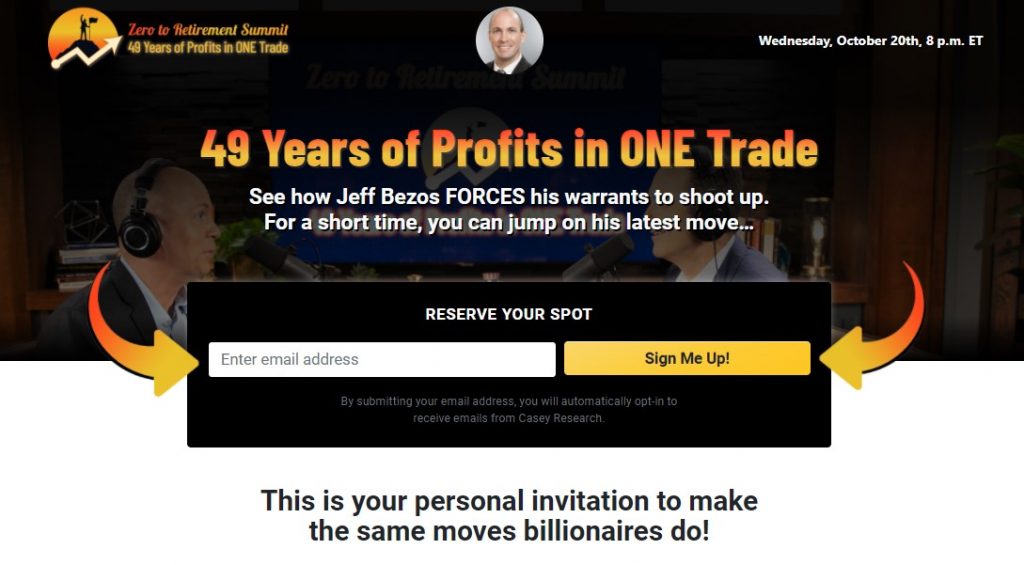 And he believes that in just a few days, you could earn a huge return on your investment.

How will you earn those returns? By trading warrants.

I should point out that this is not the first time that Dave Forest is urging his followers to invest in warrants. He once did a presentation called Warren Buffett’s #1 Private Investment (Buffett’s $12 Billion Lie).

In that pitch, he told his audience that warrants were a form of private investment that is typically reserved for the wealthy and can earn you extraordinary returns of more than 7,000% in a small amount of time.

He said that a little-known SEC loophole had created an opening for “ordinary” investors to access those investments.

Warrants are a special kind of instrument that have features that make it easy to confuse them with options.

They are a special type of contract that gives the holder the right (not the obligation) to buy assets at a specified date at a given price.

They are issued by the company and not some centralized entity like the CBOE. This is one of the main disparities between options and warrants.

What Dave Forest will Discuss at the Zero to Retirement Summit

Dave claims that Jeff Bezos has devised a cutthroat ploy that can force his warrants to go up. He says that Bezos has already done this six times before earning profits worth $2.5 billion. The six warrant deals are as follows: 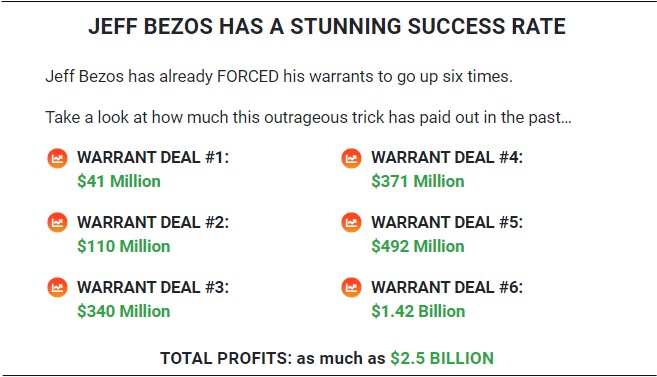 Therefore, Dave Forest intends to reveal how you can get in on Bezos’ seventh warrant deal to potentially bag that kind of gains.

He says that accessing those deals is easy because all you have to do is:

Forest claims that within the next few weeks, as the move goes public, you could earn up to 49 years of average S&P profits in one trade. I suppose that’s where the “zero to retirement” title came from because 49 years of gains are what you’d typically expect of a retirement account.

David Forest is a newsletter editor who publishes his work via Casey Research, a boutique financial research firm that was founded by legendary investor, Doug Casey.

Dave joined Casey Research in 2004 and he was the editor of a newsletter called Casey Energy Speculator. In writing for the newsletter, he was revealing high-potential investment opportunities in natural gas, oil, uranium, and renewables from across the globe.

Dave is a geologist by profession and he has had a 20-year career in the mining and petroleum industry. He has founded mineral exploration and development companies and raised over $80 million in equity financing from some well-known resource investors.

One of David’s ventures was involved in the development of a 10-million-ounce gold deposit in Colombia. He also became the first developer to be granted a modern exploration license in Myanmar.

Dave travels extensively in search of new resource projects and investment opportunities. Some of those opportunities feature in his newsletters.

Closing Remarks on The Zero to Retirement Summit

In the Zero to Retirement Summit, Dave Forest is going to reveal how he thinks Jeff Bezos forces his warrants to shoot up and how you can invest like Jeff to earn 49 years of profits in one trade.

Dave claims that so far, Jeff Bezos has forced his warrants to go up six times and that he is about to do it a seventh time. Dave wants to get more people involved as this happens and in the summit, he will share details of how you can get in on the action and ride Bezos’ coattails to those massive returns.

I should mention that this isn’t the first time Dave is talking about following the example of a billionaire when trading warrants. He previously told his audience in another presentation that he would help them emulate Warren Buffett’s warrant trades.

Warrants are not a special kind of investment that guarantees big returns. You can still lose money because, like any other form of investment, nothing is nailed on. Also, don’t go into it expecting to earn 49 years of profits in one trade because although it is possible, it rarely happens.