It is presented by the legendary politician, Ron Paul, who talks about how things have panned out since the COVID lockdowns began. As the title suggests, he thinks people should be wary of the economic impact of the policies put in place by the government since the pandemic broke out.

In this article, I give you a summary of how the presentation unfolded to enable you to decide what to make of what Stansberry Research is proposing.

What is The Socialism Survival Guide? (The Pitch)

The Socialism Survival Guide is a presentation that was published by Stansberry Research. It was presented by former Congressman Dr. Ron Paul who was brought in to promote a new book being published by the firm as well as an investment advisory service called Stansberry’s Investment Advisory. 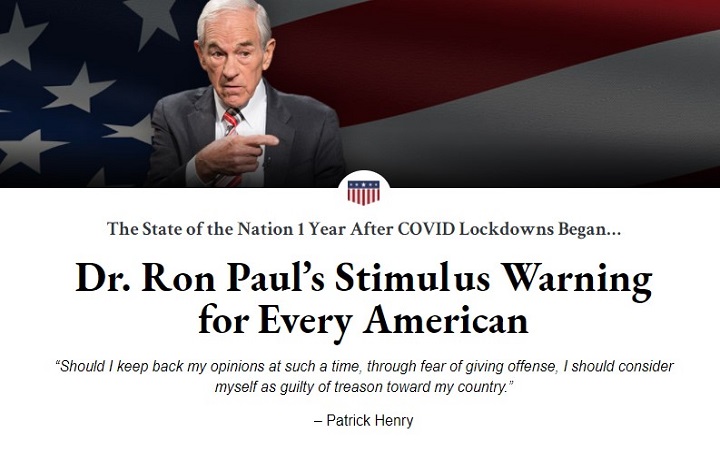 The premise of the presentation is to warn us about the impact of government stimulus on the economy and how you ought to prepare for a possible fallout.

Ron Paul starts by saying that his background in medicine enables him to view the coronavirus pandemic from a different lens than most politicians and that his views may sound controversial because they run counter to the mainstream narrative. This doesn’t come as a surprise considering that Paul is a member of the Libertarian party – not that it affects the presentation.

A staunch critic of mass surveillance (he even commended what Edward Snowden did), Paul says that he thinks the government has used the crisis to gain more power and control over people’s lives. He also believes that the hysteria surrounding COVID has been overblown and some politicians have used the panic for political profit.

He notes that government stimulus hasn’t stopped people from getting poorer and businesses, big and small, are still struggling.

He equates the stimulus plan to easy-money handouts and says that it is setting America up for a socialist future. He criticizes the Federal Reserve for printing more money and creating more public debt because it has resulted in the Dollar losing value and the cost of living rising – he even says that hyperinflation is no longer inconceivable.

Ultimately, he believes that these policies are doing more damage than good and even singles out the Baby Boomer generation as receiving the shorter end of the stick.

“If you’re not prepared, the events of the past year are about to create a crisis for Baby Boomers and others who are retired or nearing retirement.”

With that in mind, he says that you should prepare for the crisis by turning to Stansberry Research:

“See, as far as I can tell, only one organization out there is warning about the economic realities of the government’s actions.

Which is why the first thing I recommend you do is take a look at the research and recommendations put together by Stansberry Research – one of the largest, most recognized, and most respected financial research companies in the world.”

He also endorses a book that Stansberry Research has published called The Battle for America. Here is what he says about it:

“They recently put together an entire book that explains much of what I’ve described here – and what you can do about it personally.

This book is a great resource. Not only for understanding what is happening in America today. But also learning the practical steps to protect yourself.

They’ll further elaborate on my warning about the Fed’s massive money-printing experiment… and the effects these government handouts will have on Americans.”

The book is not being sold on Amazon or any bookstore; you can only get it by signing up for an advisory service called Stansberry’s Investment Advisory.

Who is Ron Paul?

Ron Paul considers himself a constitutionalist and is a big critic of the federal government’s fiscal policy – he even goes as far as opposing the existence of the Federal Reserve. That puts him in the same bracket as analysts Robert Kiyosaki and Nomi Prins I have reviewed here that have blamed the Fed for a majority of the economic challenges the country faces.

Paul is a proponent for limited government and is opposed to the military-industrial complex, the war on drugs, and mass surveillance.

He retired from Congressional politics in 2013 but continues to push his libertarian agenda in college campuses and a YouTube show he co-hosts.

What is Stansberry’s Investment Advisory?

Ron Paul’s presentation was meant to promote Stansberry’s Investment Advisory. It is the flagship investment research service of Stansberry Research.

On the official website, they describe it as an investment advisory through which Porter Stansberry, the editor, shows readers how to build and protect wealth with unconventional ideas.

When you sign up for it through the presentation, you receive:

How much do you pay to join Stansberry’s Investment Advisory?

It has a 30-day money-back guarantee.

After going through the presentation, Ron Paul’s message is that most Americans are looking to the government to fix their financial problems and elected officials are happy to oblige by offering them “handouts.” He is not for it and thinks that this policy will have devastating effects on the economy in the coming weeks and months.

Therefore, he thinks that the best way to prepare for the fallout is to read the book by Stansberry Research called The Battle for America. It, in turn, is being used to promote the flagship advisory service run by the firm called Stansberry’s Investment Advisory.

Except for the involvement of a legendary politician, this doesn’t all sound new because over the past few months we’ve seen many investment analysts say that government stimulus puts us in danger of going into hyperinflation. It is hard to decide whether this will happen as they say it will. Even if you don’t agree with any of it, you can use a different perspective to broaden your view of the market, which is what this is.