Paul Mampilly has been promoting a presentation he released that has the header “The Race to Mars is Underway.”

In it, he talks about three companies that he has unearthed that he believes are crucial to the country’s victory in a “new space race.”

In this piece, I will break down the presentation and provide you with the key talking points to enable you to decide what to make of Paul’s propositions. Keep reading to learn more.

What is The Race to Mars is Underway? (The Pitch)

The Race to Mars is Underway is a pitch by Paul Mampilly promoting his premium newsletter, Profits Unlimited. 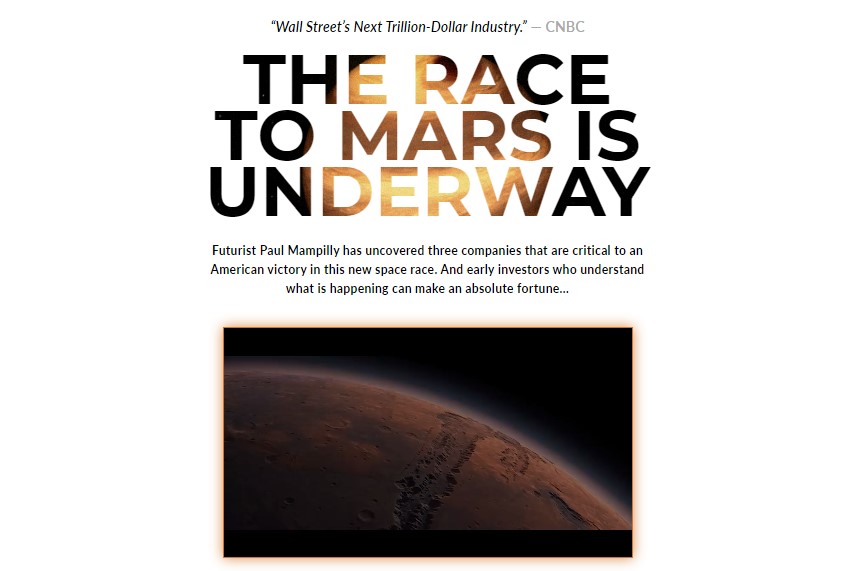 Other than that, it centers on the government and the private sector’s fixation on exploring and possibly settling on Mars. If you’ve been following current events, you are aware of a renewed drive by the government (and particularly the private sector’s desire) to explore the Red Planet which they believe is humanity’s best chance of becoming a multi-planetary species.

Paul Mampilly sees an opportunity for investors to make money off of this. In his own words:

“That means this is easily going to be the biggest investment opportunity in history.”

One of the reasons why he is excited about space is a trend he has observed with certain investors taking a keen interest in it. He refers to them as smart money:

“That’s why it pays to watch the smart money…

And the smart money in the investment community … well, it’s already on the move into space.”

He also mentions the White House, the rich, the military, and some 4,000 companies expressing interest in space exploration as a sign that it will soon be a big deal.

“They’re all working together in this all-hands-on-deck effort. It’s the perfect recipe for the biggest boom … the creation of a brand-new industry … just a massive boom that’s going to be bigger than most of us will see in our lifetimes.”

He says that people are currently working on some “astonishing innovations” that will allow us to explore space and settle on extraterrestrial bodies like the moon and Mars.

To further explain how viable a space race is, he cites the fact that we now have better technology to handle space flight; contrasting it to how we did it in the sixties when the technology was not as good as it is today. Subsequently, the costs we incur have dropped, as he puts it:

The Three Companies to invest in

Paul then tells us that he has identified three companies as the best bet to take advantage of a possible boom. He believes that you should get in on the ground floor of these three stocks to potentially earn a fortune as the whole thing shakes out.

Paul attributes the potential success of the three companies (and other stakeholders) to three key developments in the space industry:

Paul Mampilly believes that these three developments will spark massive interest in space exploration and will be the catalyst for his three stocks soaring.

So, what are the three companies?

“The first stock in my top three list is truly one-of-a-kind.

Building on its proprietary rocket technology, this hungry start-up is already at the forefront of the new space economy — a soon-to-be trillion-dollar market!”

The first one has won a couple of awards, it is competing with SpaceX, and Paul expects it to go up by 3,900%.

Moving on to the second one:

“My next favorite space stock is another strong American company, employing more than 2,000 people.

It’s got annual sales of around $600 million, and it’s valued at less than $1 billion.

But all that is about to change…

That’s because it’s at the center of the biggest revolution in manufacturing in decades. A revolution that has made it an important part of America’s crusade to space, the Moon, and Mars.

And its technology will be absolutely indispensable as our astronauts and colonists spend more and more time away from Earth.”

He even quotes Elon Musk describing the technology it is developing, whereby the SpaceX CEO said “It’s going to revolutionize design and manufacturing in the 21st century.”

It was trading at $15 when he released the presentation and he was projecting it to earn gains of 1,000% in the next three to five years.

And as for the third one:

“The last of my three favorite space stocks is a very special company.

It makes “digital steel” products that solve its customers’ most difficult design challenges. And it’s been doing so since the late 1950s.

Now I won’t get into the technical details here.

(You’ll find all those in a special briefing I put together. And I’ll have more on that in a few minutes.)

It serves more than 120,000 customers in the aerospace, defense & security, communications and industrial markets…

Its market cap right now is a little under $40 billion…”

He projects that it could see its market capitalization go up to $350 billion in five years.

Who is Paul Mampilly

Paul Mampilly is an investment analyst who works for Banyan Hill Publishing as one of its main editors. He is one of the most prolific gurus in the financial newsletter circles.

He has also written a book called Profits Unlimited: A Wall Street Insider Reveals the Secret to Life-Changing Wealth about his “investment secret” to securing financial independence.

He got into the world of finance in 1991 when he joined Bankers Trust as an assistant portfolio manager. He went on to work for ING and Deutsche Bank where he managed multi-million-dollar accounts. He later became a hedge fund manager and says that one year, the fund he was working for was named by Barron’s as the “world’s best.”

He left Wall Street at the age of 42 and decided to focus on helping Main Street investors (regular retail investors) make better decisions with their money in the markets. He does so by editing newsletters and running a blog.

What is Profits Unlimited? (The Newsletter)

The presentation was meant to promote Paul Mampilly’s investment advisory service, Profits Unlimited. I have done a more comprehensive review about it but for the sake of this article, I will provide you with a summary of what it is all about.

It is an investment research service through which Paul Mampilly reveals what he regards as the best investment opportunities. These are usually derived from major trends in trillion-dollar markets. To quote him on this, here is how he finds those opportunities:

And then, I look for companies that have components of my “GoingUpness” strategy. It’s my own secret recipe for trading success that I developed over 30+ years as a professional investor.”

That’s how he landed the three companies he teases in the presentation, which by the way, you can read more about in his special report called A Fortune Made in Space: The 3 Hottest Space Stocks to Buy Right Now.

In addition to that, here is what you get when you sign up for the newsletter:

How much does it cost to sign up for Profits Unlimited?

It comes with a one-year money-back guarantee. This means that you can cancel your membership anytime for a full refund.

Closing Remarks on The Race to Mars is Underway

The Race to Mars is Underway is a presentation by Paul Mampilly through which he promotes Profits Unlimited and alerts us about a possible space race that will elevate many companies and create a trillion-dollar industry.

It is hard to tell whether his recommendations will do well; therefore, if you decide to follow his advice, do not invest more money than you are willing to lose.