Martin Weiss recently released a presentation discussing what he calls “The Next Phase of the Collapse of 2021.”

If you haven’t gotten around to watching the video, I have summarized the key takeaways of the pitch, including everything he is proposing and written about it in this article for you to read and decide what you will make of it.

The Next Phase of the Collapse Of 2021 is the title of a presentation by Martin Weiss promoting his newsletter, the Safe Money Report. Besides promoting the newsletter, Martin also gives a detailed account of how he would suggest you protect your money and invest in the event of a financial crisis. 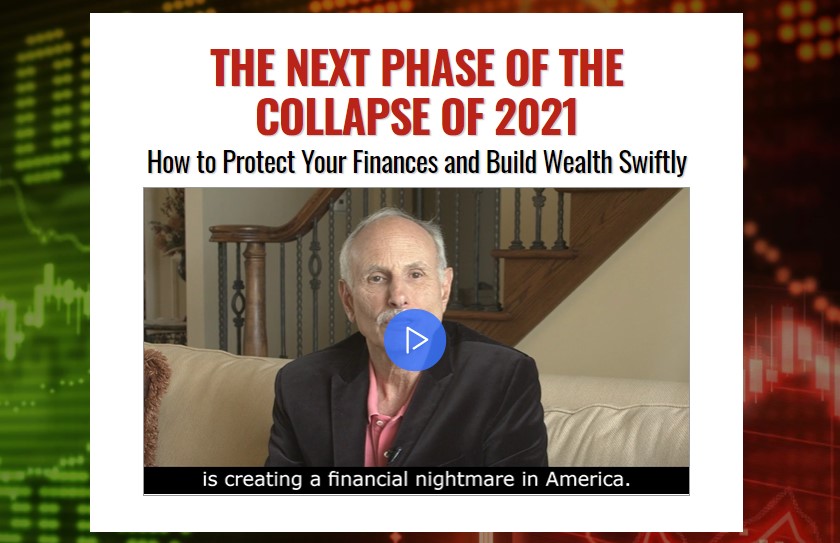 He starts his presentation by stating that the financial world is not safe due to the crisis caused by the global pandemic and adds that in December of 2019, he had predicted that there would be a severe recession and a debt crisis in 2020.

He tells us that his firm published “endangered lists” comprising ETFs, Mutual Funds, banks, and stocks that they expected to be vulnerable to a crash. Then when the market peaked, they gave the signal to sell thus helping investors avoid the market crash of 2020.

He says that there is an impending, severe financial crisis that may be bigger than anything we have experienced before and he wants to show us how to prepare for it. He believes that money spent on bonds, stocks, and banks is at risk. According to him, the problem with the upcoming crisis is that even as businesses go bankrupt and unemployment rises, the government will not bail out everyone.

Martin is not the first investment guru to have a fatalistic view of the economy. I have encountered other presentations like The Great Depression of 2020 by Jim Rickards that had similar connotations.

Martin says that the firm’s roadmap for surviving and thriving during a crisis was built on the foundation of crisis investing that goes back to the Crash of 1929 when his father, Irving Weiss was an investor. He regales us with stories of how his father navigated the Great Depression:

“He had learned accounting in school. So he knew the numbers really well. He collected data on as many companies as he could. He put the numbers down on large, green sheets that bookkeepers used — spreadsheets, actually.

And he created a series of formulas that would later become the foundation of our computer models.

Using his formulas, he identified the companies that he thought were the riskiest. He called them ‘Dogs of the Dow.’

And then, in April of 1930, after a big stock market rally, Irving borrowed $500 from his mother, and he started selling short the stock market Dogs.

When the market plunged, he took profits. Whenever it rallied, he shorted again.

Weiss tells us that before his father died, he predicted that there would be a mortgage crisis (such as the one that occurred in 2008) and another one after it that would be so severe “all the government’s money printing and all the government’s spending would still not be enough to put things back together again.” The second one could be the crash that he is predicting.

He says that in the upcoming crisis, government bailouts will not be effective because American companies have been piling up too much corporate debt for it to have any effect. The government will also be helpless as companies make losses and lay off their workers. In other words, he says that the government won’t have enough tools to avert the damaging impact of the financial crisis.

So, if you can’t rely on government protection, how does Weiss expect you to survive?

He says that you have to take matters into your own hands and he is ready to help you with that. He will provide you with a list of stock ratings to show you what stocks could plunge and those that may surge.

On top of that, he reveals the seven steps you should take to protect your finances in the event of a financial crisis:

Martin Weiss is the chairman of The Weiss Group, Inc, which consists of four separate companies (including Weiss Ratings). He founded Weiss Ratings, a 50-year old company that helps ordinary people manage their money and safeguard it in good and bad times.

He began his career in 1971 when he started Weiss Research, which was dedicated to research and evaluating the safety of financial institutions.

The companies have been providing ratings to retail investors to help them make informed decisions.

What is Safe Money Report? (The Newsletter)

Safe Money Report, which Martin started 42 years ago, is the flagship investment advisory service published by Weiss Ratings. It is edited by a senior analyst called Mike Larson.

Its key purpose has been to help retail investors survive financial crises.

When you become a member, you are entitled to free copies of the four reports promised at the end of the presentation.

Weiss also throws in a free subscription to the Weiss Ratings Daily Briefing – a daily e-letter.

How much do you pay to join Safe Money Report?

The annual subscription fee is $29 (standard).

Yes, it does. It has a one-year money-back guarantee. Even if you cancel your membership in the last month of your subscription, you will be entitled to a refund.

Closing Remarks on The Next Phase of the Collapse Of 2021

The Next Phase of the Collapse Of 2021 is a presentation that Martin Weiss released to promote a financial newsletter called Safe Money Report. It is the flagship newsletter of his investment research firm, Weiss Ratings.

He also talks at great length about how we are about to be embroiled in a financial crisis and how we should prepare for it. Of course, these preparations angle you towards signing up for the newsletter.

As for his proposals, they include some rather generic measures people normally take to hedge their finances during a crisis like buying gold, keeping some cash, dumping bad stocks, etc. The unique thing about his approach is that you have to rely on his ratings of stocks, banks, etc.

Speaking of ratings, Martin says that his firm issues warnings and ratings and they warn people about companies that are in trouble. They also rate every stock, ETF, mutual fund, and financial institutions with letter grades from A to E.