The Next Level Summit is the latest presentation to be released by Banyan Hill Publishing and it features Paul Mampilly’s new stock pick.

He asserts that the company has the potential to earn returns of 1,000% in two to three years and he wants you to consider investing in it.

After going through the presentation, I put together this article to highlight the main talking points of the conversation (and why he did the video) as well as reveal the name of the company Paul is teasing.

What is The Next Level Summit? (The Pitch)

The Next Level Summit is a presentation by Paul Mampilly (interviewed by Nick) meant to promote his True Momentum investment research service. 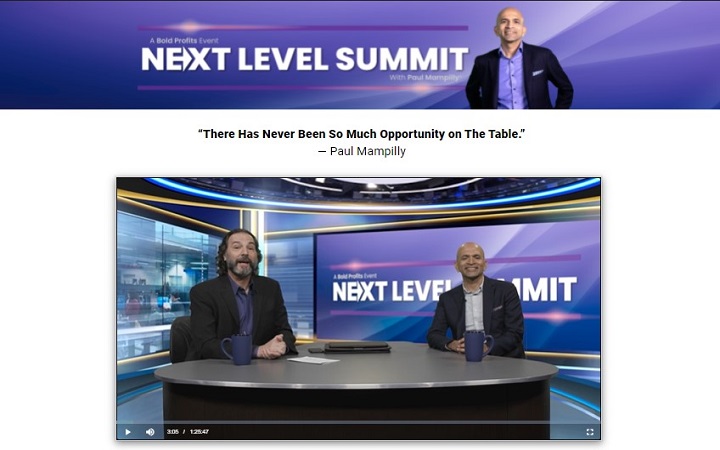 But it isn’t all about the newsletter because he lifts the lid on one investment that he wants you to consider investing in. After all, he thinks it can earn you returns of up to 1,000% in the next two to three years.

As they begin their conversation, Paul even compares its potential gains to the kind of returns that Tesla shareholders have gotten from the company in two and a half years, implying that his next pick could emulate that.

He also talks about one of his portfolios (which we later learn is True Momentum) beating the gains that the market and his Profits Unlimited portfolio made in 4 years. 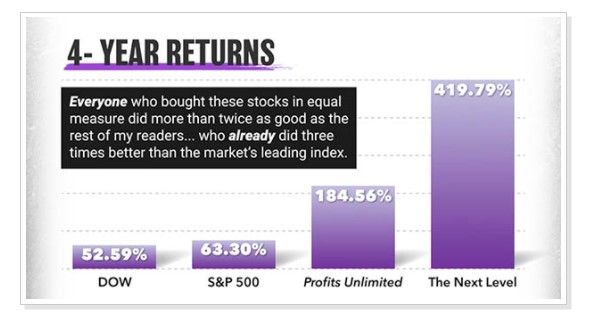 And in so doing, he wants you to embrace the idea that you can generate bigger returns in the stock market if you follow his advice. So, what are some of these next-level stocks? He says,

“There are next-level stocks all around us.

Paul Mampilly has zeroed in on one company that he believes will earn bigger returns than Tesla because it works behind the scenes in the EV industry.

Speaking of the relationship between Tesla and his number one pick, he says,

“Because Tesla is THE green energy company of the future.

It is THE leader in electric vehicles … but also a dominant force in the solar energy and battery storage spaces.

While it may seem this way on the surface…

The more you investigate this story, you find other, much smaller companies that Tesla is working with that — in percentage terms — could grow much, much faster than Tesla in the short term, perhaps longer.

The stock I’ve found could EASILY double in the next six months.”

He says that Tesla could become a $10 trillion company by the end of the decade.

But instead of investing in Tesla, he wants you to go for smaller companies that are entering their “sweet spot.” This means that they are past their speculative phase, have a viable product that is ripe for the market, and are likely to start scaling.

He wants you to invest in them before Wall Street bids them up to have a chance at capturing 300% gains within a year.

To recommend a stock, Paul Mampilly says that it must meet two key requirements:

He has identified one company that meets these requirements and we will now take a closer look at it.

First, it is in the automotive industry, as implied by Paul’s description of it…

“These next few years, as the electric vehicle market keeps surging to mainstream adoption, will be one of the most exciting profit opportunities of the next decade.

And I have found a company I am simply dying to tell my subscribers about.

It is a firm perfectly positioned at the center of all of those amazing features and functionalities I just mentioned.

So, that’s a rather bold descriptor and we can’t get much from that, but luckily Paul shares more clues about the mysterious company.

Here is what he says about what it deals with,

“This company is an industry leader in:

Augmented reality, or the ability to imprint digital objects on the material world.

Technology that can read your eye and hand movements. This is huge. It means you could point to a coffee shop you see through your windshield, ask “Do they have WIFI?” and it will know exactly what store you’re talking about, and be able to give you an answer.

And Situational Awareness, meaning it can read and respond to the world around it.”

“This company’s technology is already found in over 300 million cars on the road today, Nick. It has earned a reputation for being the best at what it does.

The technology is protected by over a thousand patents. More than a thousand patents! And the company has nearly $2 billion in business lined up from over 60 global automakers, including legacy automakers like Ford, GM, and Toyota … luxury autos such as Ferrari … and you better believe Tesla is on the list as well.”

He also says that it only has about 40 million shares outstanding.

From those clues, the company he is teasing here is Cerence Inc. (NASDAQ: CRNC).

Cerence Inc. is an automotive software company that provides AI solutions. It was spun off Nuance Communications Inc. (NUAN) in 2019 to focus on the automotive space. Cerence has been developing products for 20 years and its voice assistant product is one of the most sophisticated in the market.

The voice assistant allows the user to build a personal profile enabling it to know who is using it at all times. This also enables it to create personalized experiences like playing the user’s favorite songs or pointing the user to the cheapest gas station. Cerence has over 1,000 patents for it and supports more than 70 languages.

Cerence has its products in more than 300 million vehicles globally. It has integrated with over 60 carmakers. Among its clients are household names like GM, Toyota, Audi, Ford, BMW, Harman, and Bosch.

Therefore, it is far from a newcomer, which is why Paul Mampilly is drawn to it.

It competes with Apple’s and Google’s virtual assistant platforms but holds the advantage of being tailored to vehicles. Paul even points this out when he says,

“But the competition just isn’t there. The only companies that can compete with it are industry stalwarts like Alphabet, Amazon and Apple.

Nick, who do you think is going to offer a better experience? A large, bloated company whose focus is stretched thin? Or an industry specialist who does one thing and one thing well?”

Paul Mampilly wrote a special report about it called The Market’s Sweet Spot: Buy This EV Innovator for 300% Gains in 12 Months that he wants you to read to find out the name of the company but since we’ve already identified it, there’s no need for that.

The special report is an offer for new members of his newsletter, True Momentum, which we will take a closer look at later in this piece.

Paul Mampilly is a former hedge fund manager and a financial guru. He is infamous because he is the analyst behind a popular investment newsletter called Profits Unlimited.

Native to India, he came to the US as a young man and he found himself working on Wall Street. He has approximately 30 years of experience in the investment world because he started his career as a research assistant at Bankers Trust in 1991. He went on to work at ING, Deutsche Bank, and other institutions.

After his stint working for big institutions, he was employed by an asset management firm where he was tasked with managing one of its hedge funds. He contributed to growing its assets from $1.3 billion to $5.8 billion, which led Barron’s to recognize his and his colleagues’ efforts that year.

Disgruntled with his job on Wall Street, he retired at the age of 42 and joined the world of newsletter editing, which he does to this day. His newsletters provide Main Street investors with advice on how best to invest in the stock market.

What is True Momentum? (The Newsletter)

True Momentum is an investment advisory service that Paul Mampilly edits under Banyan Hill Publishing. Besides talking about his investment strategy, the main reason he did the presentation was to promote it and get new members to sign up for it. 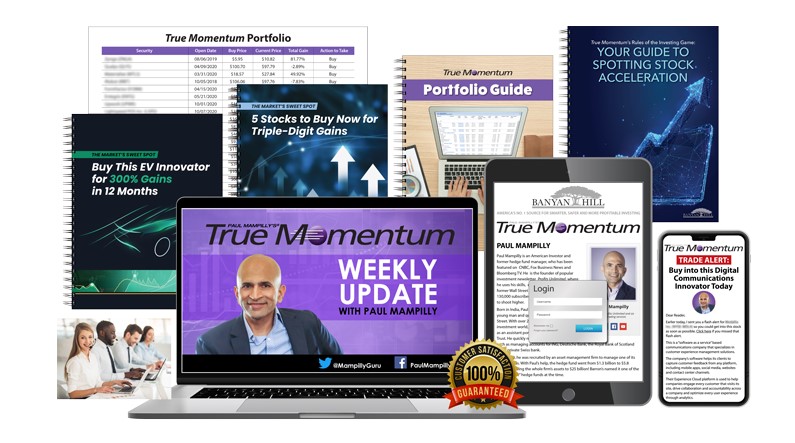 Paul says that True Momentum has outperformed every benchmark over the last four years and that it has doubled the returns of his main newsletter, Profits Unlimited.

When you sign up, he promises at least 12 new recommendations in the next year (one every month) and he says that each company will have the potential to earn returns of 300% or more.

What else do you get when you become a member of True Momentum? In addition to the 12 monthly newsletters, you get:

In addition to the aforementioned benefits, when you become a member of True Momentum, you get the following special reports for free:

How much do you pay to join True Momentum?

A one-year subscription to True Momentum if you join via the link provided at the end of the presentation costs $1,995.

They insist that this discount is only available to the first 1,000 people to sign up for the newsletter.

Paul Mampilly doesn’t say anything about a money-back guarantee and since this is a relatively expensive newsletter, he probably doesn’t offer refunds. So, you should check your order form and read the terms and conditions on this before you sign up for the newsletter.

Closing Remarks on The Next Level Summit

The Next Level Summit by Paul Mampilly was an online event he hosted to promote his newsletter, True Momentum. He teases an AI company that specializes in automotive-centric virtual assistants and voice biometrics (we found that he was teasing Cerence Inc.).

Paul promises that his newsletter centers on mid-cap stocks that have growth potential while also being proven and this is pretty evident in the company he teases. Cerence is not a small company but since it went public when it was spun off, it has consistently grown its revenue. It is a solid pick worth looking into if you are keen on the kind of stocks that Paul is talking about.