Alex Koyfman’s recent presentation about “The Most Hated Metal in the World” has been getting a lot of attention.

It concerns what he refers to as an investment that is “bigger than gold and bitcoin combined.” The mysterious investment enabled investors to make a killing in 2006 and he expects it to pop back up again.

In this piece, I will walk you through the presentation covering the main points Alex Koyfman raised. We will also take a look at the newsletter he is promoting.

Spoiler Alert: I reveal the name of his “hidden” number one stock in this article.

What is The Most Hated Metal in the World? (The Pitch)

The Most Hated Metal in the World is the heading of Alex Koyfman’s presentation that he published to advertise his newsletter, Microcap Insider.

The metal he is referring to is uranium and he is interested in it because it may provide investors with a good investment opportunity. 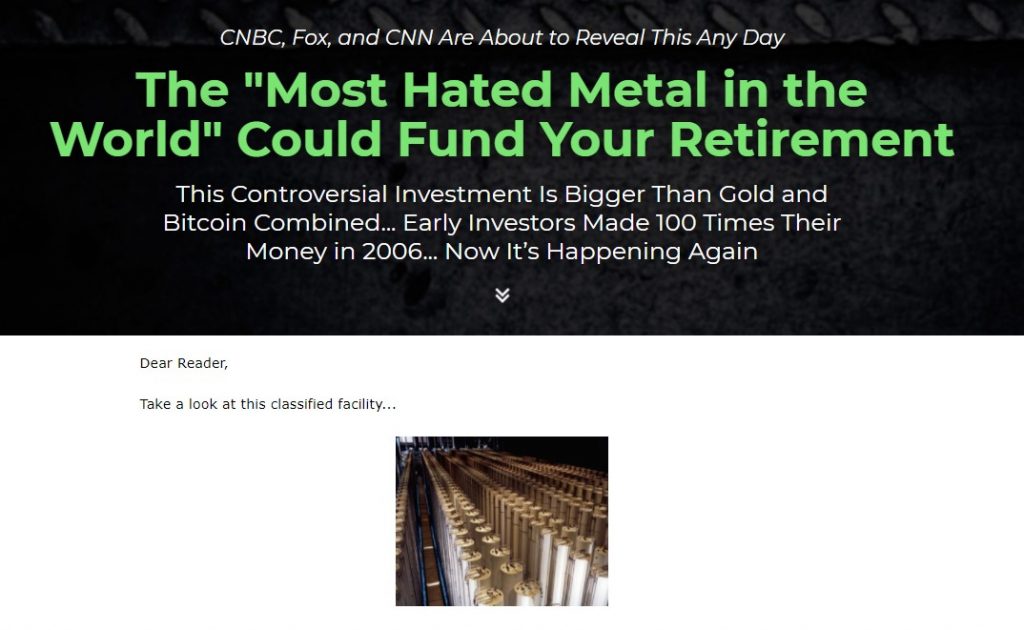 In the past, uranium has created opportunities for gains that are comparable to those of cryptocurrencies:

“Because this exact same investment has already surged to crypto-like gains TWICE since the 1970s.

Investors increased their money by 3,677%”

Why invest in Uranium NOW?

Alex Koyfman believes that it will be the investment of the 2020s because of three important factors/catalysts:

Explaining why there is a supply shortage, Alex says:

“This recent uranium supply shock literally happened from one day to the next… on top of a shortage we’ve had since 2018.

Because some of the largest and oldest mines in the world were forced to shut down in the wake of COVID-19.”

So he says that there has been a shortage since 2018 and this has recently been exacerbated by the coronavirus pandemic because a big mine has been forced to go out of business.

As for the “once-in-a-decade” market event, Koyfman is referring to the dash by many nuclear power plants to renew their futures contracts:

“Seabrook and other power plants secure their supply of uranium under long-term contracts that usually run for up to 15 years.

Today, most of these contracts are close to the end of their term.”

We are about to see a wave of renewals:

“One of my sources says 81% of these contracts are up for renewal in the near future.

Another anonymous source confirms, ‘Utilities are beginning to run out their contracts.’

When utilities rush into contract renewal, prices are virtually guaranteed to shoot up.”

Therefore, this means that the situation is perfect for you to invest in uranium.

How to invest in “The Most Hated Metal in the World”

With those factors lining up, Alex has identified three companies that will be ideal for investment.

He has chosen American companies because he says that the current administration has been making moves to uplift them.

Normally, American nuclear power producers rely on Russia and China for Uranium but, wary of the strategic threat that those countries pose, the American government prefers to be self-sufficient:

“Trump addressed this threat by establishing the Nuclear Fuel Working Group in 2019 and ordered it to make recommendations on how to secure domestic supply.”

The task force made proposals that would elevate local Uranium suppliers.

That led Alex Koyfman to focus on suppliers based in the US and he has identified three companies. He named two of them and withheld the third one (to get you to subscribe to his report). The two he revealed are:

He dropped a few clues as to what the third company was:

I call this company the ‘Amazon of uranium’…

And owns a whole range of mines and production sites in Texas, New Mexico, Arizona, Colorado, Utah, Wyoming… nearly all of them permitted and developed.

This company’s licensed production capacity amounts to a huge 11.5 million pounds per year, making it the #1 uranium producer in the U.S. since 2017.”

Then he throws in a bonus clue about it also being involved in the refinement of rare-earth elements:

“This company owns all the facilities necessary to process uranium… but its facilities can also be used to refine rare-earths.”

With those clues, the company that fits the description is Energy Fuels Inc. (UUUU).

This screenshot I took from its website verifies a few facts about it that match what Alex described in his presentation:

In April, it announced that it was entering the rare earth elements (REE) sector.

Alex Koyfman is a professional stock trader and investment analyst. He works for Angel Publishing, which has links to Agora Financial, where he publishes the Microcap Insider newsletter.

Alex was born in Soviet Russia towards the end of the cold war and moved to the United States at a very young age.

He has been trading stocks for much of his adult life, an obsession that began in early 2002. His first meaningful trade was an investment in WorldCom that earned him a 6-figure return and made him believe that he could trade professionally.

He mainly traded and continues to trade microcap stocks.

Although he went to law school, his success in the market inspired him to quit the legal industry to trade stocks and write a financial blog full time. He later joined the Angel Publishing editorial team (in 2014).

Alex adopted a scientific approach and statistical de-risking methods to build his portfolio.

What is the Microcap Insider? (The Newsletter)

The Microcap Insider is the name of the newsletter this presentation was meant to promote. As its name suggests, most of what Koyfman does is give you recommendations of microcap stocks.

Alex Koyfman echoes what many other investment gurus have been saying for as long as I can remember: you can earn big gains on early-stage venture capital investments if you are lucky enough to find those opportunities.

We have encountered this phenomenon with gurus like Matt McCall with the Microcap Millionaire Project and Jeff Brown with his Near Future Report newsletter.

According to him, retail investors do not hear about those investments because they are not “insiders.” They cannot access information regarding promising private companies because the “insiders” keep it hidden.

Therefore, through the Microcap Insider, he shares information regarding companies in the tech sector that are trading publicly that have the potential to become big household names.

Here’s what you get when you subscribe to the newsletter:

How much will you pay to sign up for Microcap Insider?

Usually, they charge $1,999 for the newsletter but you can join for $999 through the special offer.

You have 90 days to decide whether the newsletter is ideal for you. During this period, you can cancel your subscription for a full refund, “no questions asked.”

Closing Remarks on “The Most Hated Metal in the World”

“The Most Hated Metal in the World” is a presentation by Alex Koyfman promoting the newsletter, Microcap Insider.

However, technically speaking, the “most hated metal in the world” is Uranium. He doesn’t explain why he chose to label it like that but it probably has to do with the stigma surrounding nuclear power plant disasters and the bombs (my guess).

He mentions that now is the perfect opportunity to invest in uranium mining stocks (particularly those based in the US) because the demand has outstripped supply and many power plants are about to sign new contracts for future supply.

He has identified three companies that you should invest in to take advantage of the Uranium boom; he names two (Azarga Uranium and Uranium Energy Corp.) and promises to reveal the other one if you subscribe to his newsletter.

Fortunately, you don’t have to subscribe to the newsletter because I revealed that his number one uranium stock is Energy Fuels Inc. (UUUU).

The newsletter, Microcap Insider, is all about investing in microcap stocks. Alex is careful to clarify that due to their inherent volatility, you need to be risk-tolerant to invest in the stocks he recommends through it.