I recently came across a presentation by Andy with the heading: The Great Devastation of 2021.

From the beginning, Andy paints a grim picture of how bad things could be in 2021, even telling us that it could be worse than the Great Depression of 1929 and the Great Recession of 2008.

In this article, I walk you through the presentation’s main talking points and reveal some of the investments he thinks will help you stay afloat in the event his predictions are right.

What is The Great Devastation of 2021? (The Pitch)

The Great Devastation of 2021 is a pitch by Andy Snyder that is meant to accomplish two things. First, it promotes his investment advisory service, the Manward Letter, and second, it informs the audience about the possibility of an upcoming period of financial hardship. 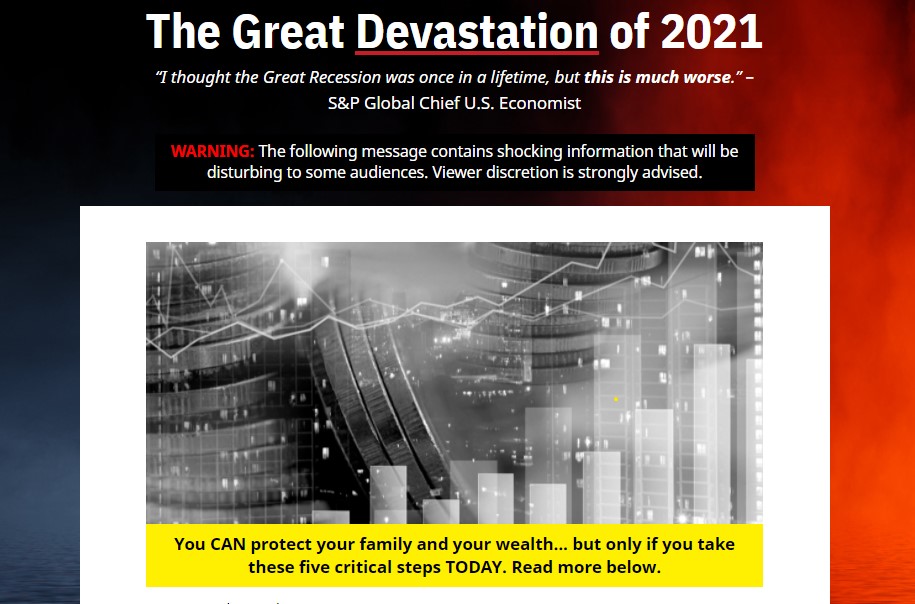 Regarding the period of financial hardship, Andy insists that the economic shutdown that was imposed by the government in the wake of the coronavirus outbreak will have adverse long-term effects on the economy:

“The coronavirus crisis… along with the economic lockdown the government forced down our throats… has created a long-term disaster unlike anything we’ve faced before.”

He goes on about how the economy is on the verge of collapse and points out a few signs that this may be underway:

Some 100,000 small businesses have already gone under. And 72% of those still hanging on say the outbreak will have permanent effects…

Unemployment is out of control.

Some 46 million people have lost their jobs.

As the defaults stack up, the Fed confirms that banks could face at least $700 billion in loan losses.

Tax revenue for state and local governments is drying up as the economy tanks.

Soon we won’t have the money to fund schools… fire departments… police… or the basic functions of government.

Even our wealthiest cities are running out of money. At the same time, many are descending into lawless chaos like we’ve never seen before.

And in a matter of just a few weeks, the federal government added $3 TRILLION to our debt… more than twice the new debt created in all of 2019… with more and more piling up every day.

In the first three months of the crisis alone, Washington was close to spending as much money as it cost America to fight the Revolutionary War… the Civil War… and BOTH World Wars… combined.”

In a nutshell, Andy is telling us that people are out of jobs, businesses are going under, people and businesses are defaulting on their loans, tax revenue is shrinking, and the government is broke.

He goes on to say that the government’s solution to the problems has been and will continue to be printing money out of thin air. This money will be used to prop up failing businesses and citizens (through stimulus checks).

He says that consequently, the dollar may undergo unprecedented inflation and he won’t be surprised if the country came to look like Weimar Germany or Zimbabwe, which are both known for going through periods of hyperinflation.

He also warns that a COVID-19 vaccine will not spare the economy until the vaccines are widely available.

How to survive The Great Devastation of 2021

After pointing all that out, Andy then presents us with a solution that he thinks will keep us afloat when the times get bad.

He wants you to stop sitting on cash, opening a savings account, or investing in bonds. Instead, he says that you should turn to the stock market because he doesn’t see it crashing along with the economy. To be fair, you cannot argue with that because in 2020, as the economy slowed down, the stock market was booming.

Andy thinks that investors are using the “free money” they are getting in form of stimulus checks to invest in the market thus causing the disparity and he even shows us a graph to prove his assessment:

Knowing that Andy has come up with five steps you should take to survive a potential financial crisis:

He has identified three stocks that he expects to thrive because they will “essentially get cash pumped in by the fed.” He gives descriptions of the three but doesn’t reveal their names.

He describes the first one as:

“The Google of the Finance World? It’s a critical gathering point for investors. One major outlet called it ‘the most powerful company you’ve never heard of.’ They even compared it to blue chips like Apple and ExxonMobil. It touches just about every major commodities trade. And it doesn’t matter how the market moves. You could win either way.”

He is talking about the Chicago Mercantile Exchange (CME). A HuffPost article in 2012 called it the most powerful company and compared its influence to that exerted by companies like Exxon Mobil, Bank of America, McDonald’s, Apple, General Electric, and Wal-Mart.

It also fits Andy’s description because it owns the most important market for derivatives, the Chicago Board of Trade.

The second “devastation-proof” stock is described as:

You simply won’t find another Big Tech stock that has the potential to not only double your money in 18 months during this devastation… but also increase its dividend payout by double digits – at a time when others are slashing theirs.”

Unfortunately, that is quite vague and I couldn’t accurately determine what company he was talking about.

We move to the third one and here is how he describes it:

“The Deal(maker) of the Decade. Data is the future of banking. Without it, banks can’t know who is creditworthy. And this company is set to become the leading data provider for the banking sector. It recently launched a unique software that spots and evaluates potential risks for banks in real time.

In plain English, that means helping financial institutions see things like bad loans a mile away. It’s the type of advantage “old money” banks can – and will – pay for.”

Although I am not entirely sure about this, the company that comes close to matching this description is Raddon. It recently launched an intelligent software that provides banks with information regarding their customers’ spending habits and banking behaviors and it is owned by Fiserv Inc. (NASDAQ: FISV).

Andy wrote a report detailing the three stocks. It is called 3 Perfect Stocks for ‘Devastation-Proof’ Wealth. You can get a free copy by signing up for the Manward Letter.

Gold has been a popular tool of diversification used by investors during periods of economic uncertainty. It doesn’t come as a surprise that Andy has added it to the list here.

Andy wrote a report titled Manward’s Guide to Owning and Profiting From Gold outlining his approach towards gold.

Cryptocurrencies have also become a safe-haven investment for investors who anticipate inflation and volatility in the market. Therefore, it is also not surprising that Andy has it on his list.

He has identified one digital currency that he refers to as “LibertyCoin.”

It’s safe to say that he is not referring to Michigan’s largest rare coin and precious metals dealer (a company called Liberty Coin).

It’s hard to tell which cryptocurrency he is talking about without further clues. That being said, he wrote a report about it called LibertyCoin: The Perfect Crypto for Building Wealth and Liberty.

Snyder tells us that six well-known companies may not survive 2021. He hasn’t even described them in the pitch but lists them in a report called The Bankruptcy Watch List: Six American Icons on Suicide Watch.

Andy claims to have found a tech company that will not only do well in 2021 but also thrive for the next ten years. It has something to do with providing internet connectivity:

“That’s why I believe one small Arizona-based company is poised to become the ‘gatekeeper of the entire internet.’”

It has some big clients and Amazon may acquire it. More from Synder:

“It’s already doing it for a who’s who of the digital entertainment world.

That last one is important… because I don’t rule out the possibility of Amazon buying this company.

And a buyout by Amazon could be a HUGE win for investors.

Keep in mind, the company’s financial position is incredibly strong.

The smart money, like institutional investors and hedge funds, sees a massive opportunity. They own almost 80% of this company’s outstanding shares.

The company’s own executives are buying massive blocks of stock. They believe shares are set to skyrocket soon.

I agree with them.”

After researching it, I found out that the company he is most likely talking about here is Limelight Networks (LLNW). It is a content delivery network company that matches those revenue figures. However, its stock price has not gone up by a big margin since it went public.

Andy has written a report about it called The #1 Tech Stock of the Decade.

To get all these reports for free, you have to subscribe to the Manward Letter. We will look into it later, but first, let’s take a look at Andy’s credentials.

Who is Andy Snyder?

Andy Snyder is an author, investment analyst, and entrepreneur.

He was once hired by a financial firm that had close to $100 billion in assets under management and that’s where he learned how the markets work before he started writing newsletters.

He is the founder of Manward Press, an outlet through which he shares his “unfiltered, unorthodox views” about money with his audience.

He has been featured on Fox News, several radio stations, and print and online outlets. He has even been a keynote speaker at events.

What is Manward Letter? (The Newsletter)

The Manward Letter is the flagship advisory service of the Manward Press.

Snyder says that its purpose is to help average people to live a rich life irrespective of the state of the economy.

You also receive the aforementioned five reports that I will list here:

How much do you pay to join Manward Letter?

Yes, you can cancel your membership at any time for a full refund. It has a one-year money-back guarantee.

Closing Remarks on The Great Devastation of 2021

The Great Devastation of 2021 by Andy Snyder not only advertises the Manward Letter but also gives us his perspective on how the economy will shake out in 2021. As the title suggests, he doesn’t see anything but doom and gloom and it becomes even more evident as the presentation wears on.

Andy’s viewpoint is shared by Martin Weiss’ recently released presentation titled “The Next Phase of the Collapse Of 2021″ that also had similar connotations to this one, albeit with several disparities.

I have revealed some of the investments he teases in the presentation and will leave it up to you to decide how you will handle that information. All I can tell you is to not invest money that you cannot afford to lose.