Have you come across Jim Rickards’ presentation titled The Great Depression of 2020?

Jim has made a name for himself as the guy who predicts economic fallouts and shows people how to protect themselves from their effects (usually by investing in precious metals).

In this pitch, he says that the coronavirus pandemic will cause the latest version of the great depression and that he has found the perfect way for people to protect themselves from its effects.

In this review, I will quickly walk you through the main points of the presentation to help you better understand what Rickards is talking about.

The Great Depression of 2020 is a presentation by Jim Rickards primarily meant to promote his advisory service, Strategic Intelligence. 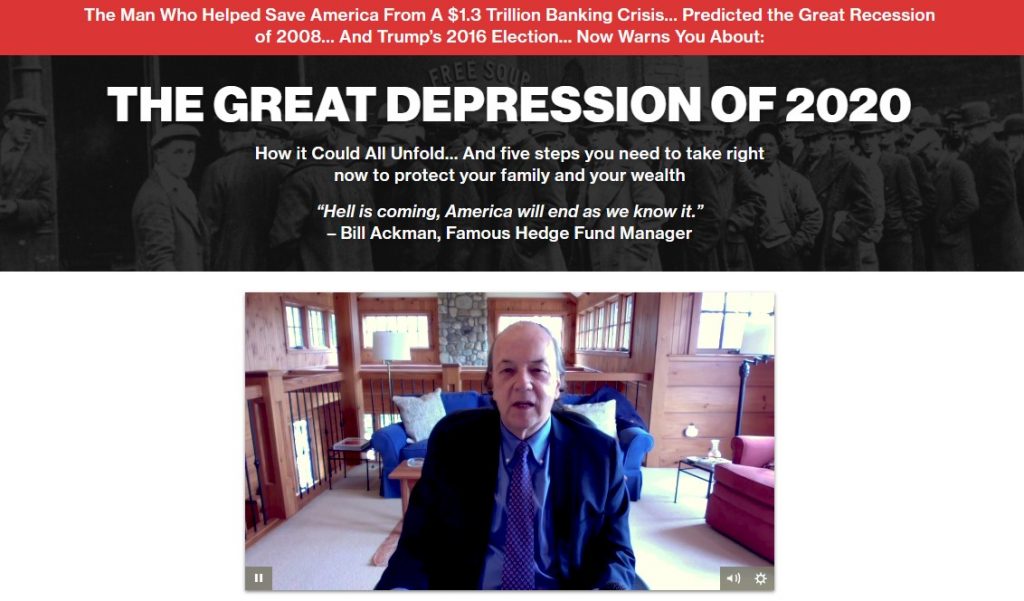 In typical fashion, Rickards claims the economy is likely to go down the tubes and the coronavirus-induced recession will likely morph into a full-blown depression. He claims that it will be serious enough to dwarf The Global Financial Crisis and The Great Depression of 1929 and may even spark social unrest:

“That’s why the first domino will be depression levels of unemployment… I’m talking about 25% or more.

Then the next domino to fall will be massive bankruptcies… even from blue-chip companies like American Airlines.

Then the crisis will spread to other important areas of the economy, like the real estate market…

After all, how can you pay your mortgage if you don’t have a job?

With companies going bankrupt and unable to pay their debt, then the crisis will spread to banks and financial institutions…

Think 2008 on steroids, with a scenario where you can’t even get your own cash from your bank account.

Then, the last domino to fall will be a complete collapse of our society and rule of law.

He released the presentation in April in the wake of an unprecedented sell-off when much of the global economy had ground to a halt and many governments had implemented lockdowns.

Who is Jim Rickards?

James G. Rickards (also known as “Jim Rickards”) is a lawyer, economist, and investment banker. He has been working in the capital markets on Wall Street for the better part of the past 40 years.

He is the editor of Project Prophesy, Crash Speculator, and Strategic Intelligence, all of which are published by Paradigm Press, an imprint of Agora Financial.

Rickards has had his fair share of high-profile engagements: he was a key negotiator in the Long-Term Capital Management (LCTM) bailout case in 1998 and has been an advisor to the US Intelligence community as well as the office of the secretary of Defense on matters to do with the markets.

He has written books centered on macroeconomic topics, including The New Case for Gold, Currency Wars, and The Death of Money.

More than anything, Jim Rickards is a big advocate for gold and silver. If you study his work over time, he has always been predicting doomsday-like economic collapses that are usually ripe for investing in precious metals.

How to protect yourself from The Great Depression of 2020

Jim proposes what he refers to as “the five steps” you should take to protect yourself from the potentially adverse economic climate:

Jim Rickards is a big fan of gold and silver and thinks that they can stave off the harmful effects of a devalued currency. In his own words:

“But in the long-term, all this government debt and money printing could lead to hyperinflation.

That’s why I recommend you have 10% of your assets in physical gold, as a hedge against a complete collapse of our currency.”

In that instance, he was implying that stimulus checks and low-interest rates would cause inflation and gold would be the best bet.

To help you to the best gold investments, he promises to send you his book, The New Case for Gold, for free.

Better yet, it’s owned by a tiny company trading for just around $4…

You see, this silver mine is so big that a third-party analyst estimated it’s worth over $6.9 billion.

Unfortunately, there isn’t enough information from that to determine what silver stock Rickards was referring to there. He wrote a report about it called The $4 Company Behind the Last Pure Silver Mine in the World.

“The best way to hedge against potential market losses is to buy [crash contracts].”

This one wasn’t hard to decipher as I merely copied that quote and pasted it in the search engine and it brought up this result:

Therefore, the “Crash contracts” he is referring to are put options. If you don’t know much about them, they are usually used by traders to bet against falling stocks.

Step 3: Companies to NOT invest in

He has a list of three popular stocks that he thinks will not survive a depression.

He has written a report about those companies titled Ticking Time Bombs: Stocks to Avoid During A Market Crash.

Step 4: Five companies to invest in

He has a list of five stocks that he expects to thrive during the pandemic. He has written about them in a report titled Five Recession-Proof Stocks to Buy Right Now.

Step 5: Tips on protecting yourself in case social unrest erupts

This one has nothing to do with investing and is more of a guide on how to protect your property from riots if they erupt near you. He consulted an ex-CIA operative called Jason Hanson, who helped write a report called How To Make Your Home Your Personal Fortress.

What is Jim Rickard’s Strategic Intelligence? (The Newsletter)

Although The Great Depression of 2020 proposes some interesting ideas, it is meant to promote Jim’s advisory service, Strategic Intelligence.

You could argue that the newsletter was created out of what Jim claims at the beginning of the pitch as a “duty to warn you about what could unfold in America in the coming days.”

In my full review of Jim Rickard’s Strategic Intelligence, I mentioned that one of the main ideas Jim has been pushing is that the monetary system is “about to” collapse.

This tactic has been used by other editors before to get people to buy what they were selling. For example, Nick Giambruno, in his Endgame 2020 presentation, went on about the currency system being revamped and how that would doom people’s savings.

While we won’t be going deep into what Strategic Intelligence is about (you can read the full review linked to above), the long and short of it is that Jim uses it to show you how to invest to survive the doomsday scenarios he paints up.

To “reward” you for heeding his warnings quickly by subscribing to the newsletter as soon as you watch or read his presentation, he also promises to send you a few freebies.

How much do you pay to join Strategic Intelligence?

The subscription fee for one year is usually $199 but if you join via the presentation, you will pay anywhere between $49 and $129 depending on the type of subscription you choose.

I should mention that it comes with a 6-month money-back guarantee.

Closing Remarks on “The Great Depression of 2020”

Jim Rickards has been known to scare the lights out of his readers with apocalyptic predictions to get them to sign up for his newsletters. While this pitch borders on that, it is always intriguing to read what he is up to (even though you won’t necessarily buy into it).

Jim released “The Great Depression of 2020” in April when the pandemic was still novel. The overarching idea was that the coronavirus pandemic would be bad enough to trigger 2020’s version of a “Great Depression.”

Since I am writing this in late October, I should mention that Gold has been rising steadily in price and hit the $2,000/ounce mark at one point in the past few months, which was record-breaking.

If you look at it that way, Rickards was technically correct and investment then would have made you money. That being said, don’t expect to become rich overnight if you subscribe to his newsletter.