You have probably encountered a presentation by Bill O’Reilly and Alexander Green called The Great American Wealth Project.

It is one of the most hyped-up presentations offered by The Oxford Club coming with the promise of helping you achieve a 7-Figure Net Worth.

But is there any truth to those claims?

In this article, I give you an overview of what was covered during the presentation, what Alex promised his viewers for tuning in, and the stock that he was touting as “good enough to fund your retirement.”

What is The Great American Wealth Project?

The Great American Wealth Project is the presentation that The Oxford Club has been hyping for the past year or so. They first released it on September 17, 2019.

If you have visited The Oxford Club website at any point since they posted it, you’ve likely seen this on the main page:

Dubbed “The biggest online event of the century,” The Great American Wealth Project is presented by former host of the popular “O’Reilly Factor,” Bill O’Reilly, and Alexander Green.

The event was meant to advertise The Oxford Communique newsletter, which is the flagship service offered by The Oxford Club.

“You can get rich by investing”

Alex and Bill began the presentation by discussing the lackluster investment record of the average American citizen.

Although they blamed schools and parents for not teaching basic financial literacy, the reserved the biggest telling off for the financial media for scaring people off investing in the market either by publishing alarmist headlines or failing to highlight good opportunities.

“One reason is a basic lack of financial literacy. Schools don’t teach it, and most parents don’t know enough to instruct their kids either.”

“But the #1 reason is that the media is FAILING at its job to inform the public about the incredible wealth-building opportunities available right now. If you look at the headlines, you’d think the country is struggling economically. The media scares the hell out of people, to the point where they’re afraid to put their money in the markets.”

That leaves people unprepared for retirement, a situation Alex intends to help solve with his investment recommendations starting with the one he spent a majority of the presentation touting.

Let’s take a closer look at that.

The number one stock to fund your retirement?

Alex Green’s solution to the savings and retirement crisis is to invest in the shares of one company that he thinks can deliver massive paydays to its investors. Here is what he said about it verbatim:

“There’s only one surefire way to retire wealthy in America.

Sometimes, just ONE great company… ONE single stock… can pay for your entire retirement.”

This reminds me of a review I recently published of Jeff Clark’s 3 Stock Retirement Blueprint. In that presentation, Jeff insisted that you can base your entire retirement plan on 3 stocks, which echoes what appears to be Alex Green’s one-stock plan here. Also similar to Eric Fry strategies.

Alex is methodical in how he picks his one stock and claims to have used this strategy to tout Netflix when it was breaking out a couple of years ago. He has five criteria that help him pick “the perfect stock”:

“It would be a leader in cutting-edge technology that changes the way we live… just like Apple, Amazon, Google, Facebook, and yes, Netflix.

It would have breakthrough products used by millions of customers around the world.

Patents and trademarks would protect its profit margins.

It would be relatively undiscovered and trading for a very low price.”

He has found one company that meets those requirements. It is a 5G stock that he thinks “is going to be one of the biggest investment opportunities of our lifetimes.”

Let’s go through the clues he offered that makes it special enough to warrant that description.

First, it manufactures an important component of the entire 5G network, the 5G microchips. Here is what he says about that:

“It makes the 5G microchips necessary for the entire system to work. To put it bluntly… any business that wants to be involved in this coming 5G revolution needs this company’s product.”

He states that there has been a surge in demand with companies like Google, Samsung, and Audi already interested in its product.

This whole “company x creating a product vital to the 5G rollout” theme is along the same lines as what we have encountered with other presentations centered on 5G stocks that I have reviewed here, including 5G Cash Towers by Zach Scheidt and Tiny Silver Smart Antenna by Louis Navellier.

Second, it has done a deal with SoftBank Group, one of the largest investment companies in the world, with large holdings in the tech sector.

Third, its microchips will be in almost every device that will have a 5G application. Here is what he says to that effect:

“This company’s microchips will soon be found in 2.3 BILLION products worldwide. We’re already seeing this company’s 5G microchips used in the Internet of Things, automotive technology and big data, processing storage, networking and security… It’s in routers, switches, appliances, data storage and servers… It’s in circuits and adapters too.”

Fourth, it has 10,000 patents to protect its products and guarantee sales.

Fifth, it is flush with cash from its deals that it is ready to spread around to its shareholders.

“It’s got $1.7 BILLION coming in 2020 after signing a new deal with NXP Semiconductors. And it’s sitting on $500 million right now that its CEO says it’s prepared to distribute to shareholders”

The name of the stock

The stock Alex Green teases in the presentation is Marvell Technology Group (MRVL). It fits the description because it is a semiconductor company with 10,000 patents. It also sold its Wi-Fi Tech unit to NXP Semiconductor for $1.76 billion in May 2019.

You can check out its stock chart here if you are interested in it.

Who is Alexander Green?

Alexander (Alex) Green, is the chief investment strategist at The Oxford Club. He is the editor of the flagship newsletter, The Oxford Communique, as well as Oxford Microcap Trader, The Insider Alert, and The Momentum Alert.

He is a Wall Street veteran with over two decades’ experience as an investment advisor, research analyst, portfolio manager, and financial writer.

Alex is an author and has so far managed to publish four bestselling books on investing, including The Secret of Shelter Island, The Gone Fishin’ Portfolio, An Embarrassment of Riches, and Beyond Wealth.

What do you get by signing up for The Great American Wealth Project?

At the end of the presentation, Alex promises to send his readers a package called The Great American Wealth Blueprint, which is a collection of reports meant to get you to join the Oxford Communique. 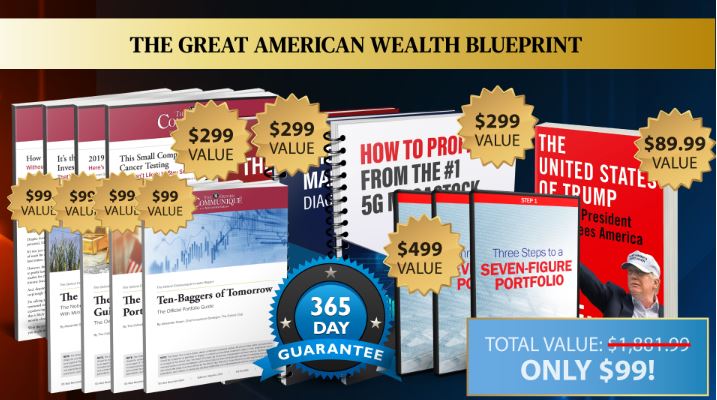 The blueprint contains the following items:

You can choose between a standard subscription ($49), a premium subscription ($99), and a deluxe subscription ($129). The differences between them are the bonuses and versions (print vs. download) you get with the most expensive one having the most attachments.

Note that those rates are for the first year of The Oxford Communique. After that initial year, the service auto-renews for $79 irrespective of the type of subscription you chose in your first year.

The Oxford Communique is backed by a double guarantee:

When The Oxford Club published The Great American Wealth Project, they involved Bill O’Reilly to win over more followers because having him on it builds more trust in the project. He resonates with people who would typically distrust a regular newsletter editor like Alex Green.

Beyond that, The Great American Wealth Project is merely an elaborate pitch for The Oxford Communique, the flagship newsletter offered by the publisher.

To be fair, the Oxford Communique has been one of the best performing investment newsletters for the duration they have been offering it. When Mark Hulbert – senior columnist for MarketWatch – independently tracked the best-performing investment newsletters on Hulbert Financial Digest a few years ago, The Oxford Communique frequently made it to the top 10 letters.

Past performance does not guarantee future results, but it goes to show that it is one of the few newsletters worth considering.