Casey Research has been promoting an event hosted by Chris Hurt featuring Doug Casey (the founder of the firm) called The Gold Spike Summit.

It is not a teaser because they don’t share details about some stock picks they expect to do well but they talk about the merits of investing in gold stocks.

Therefore, this article gives you an overview of the webinar, highlighting the main talking points in case you haven’t sat through the hour-long video.

What is Gold Spike Summit? (The Pitch)

The Gold Spike Summit is a webinar that was meant to popularize the idea that now is the perfect time to invest in the gold bull market. Gold has been doing very well over the past few months and in the presentation, they even say that it has outperformed the stock market by a factor of nearly 4 to 1 in the past 20 years. 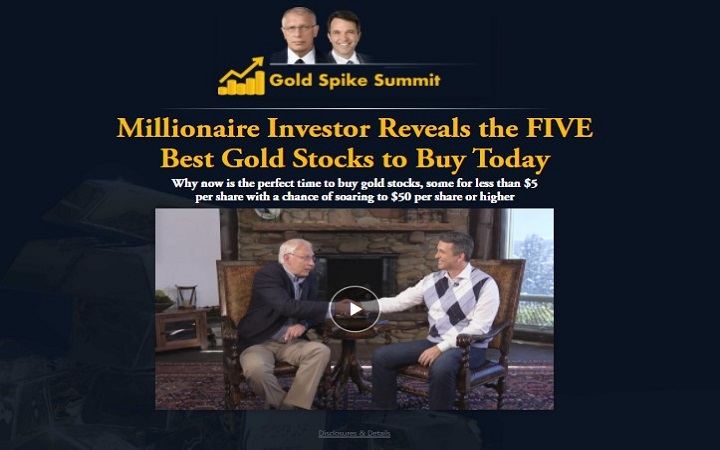 When Chris Hurt brought up the success of the stock market, Doug says that it is giving us a false sense of prosperity. He tells Chris,

“I hate to burst your bubble, Chris. But that’s all a mirage. A fiction.

The so-called prosperity we’ve seen over the past decade was simply an illusion. The economy nearly went over the edge in 2008. Governments and their central banks kept it together by printing up scores of trillions of currency units. Most of that new money flowed into stocks and bonds. Sure, that kept the banks, brokers, and insurers from going under — and made the rich much, much richer.

All that new money has encouraged the government, businesses, and the average American to go even further into debt. To live above their means.

Everything might ‘seem’ fine, but we’re headed for a major crack-up.”

He says that smart investors are exchanging their fiat currencies for gold because it is the only asset he thinks of that is not simultaneously another person’s liability. He also says that the world is being forced to revert to a gold-backed financial system that the US, for example, abandoned in 1971.

Doug says that from 1792 until 1933, the US dollar was tied to gold and that the precious metal was considered money. People even walked around with gold coins in their pockets until the Roosevelt administration in 1933 forced people to turn in their gold coins and bullion. The president made it unlawful to use gold as currency between individuals.

But in 1974, Gerald Ford’s administration lifted those restrictions and allowed Americans to own gold again. As a result, its price went up.

As the price of bullion went up, some individual gold stocks rose even higher and Doug expects this to play out again if it already hasn’t started (gold stocks outperforming bullion). He says,

“Since the Bretton Woods agreement after World War II, all the world’s governments agreed to use the U.S. dollar as the equivalent of gold.

Since Nixon devalued the dollar in 1971, it has become a floating abstraction. But all the world’s commodities — most importantly oil — are priced in dollars.

Even when Russia and China trade with each other, they generally have to use dollars clearing through New York.

Because they don’t trust each other’s paper rubles and yuan.

Do you think the Malaysians and the Argentines, for instance, will accept each other’s ringgits and pesos? Of course not.

Everybody uses dollars. Even though they know both the U.S. Government and the Fed are bankrupt. But they’re still the best looking horses on the way to the glue factory.

But the Russians and the Chinese, in particular, don’t want to use dollars — it’s the paper currency of their adversary, or even enemy.

But they don’t trust each other’s currencies either. That’s why they’ve both been big gold buyers — getting rid of U.S. dollars for gold. Others are following their lead for the same reasons.”

Therefore, Doug is saying that the price of gold is going up because Central banks around the world are buying gold at a staggering pace, which has triggered a gold-purchasing panic and pushed the price up. They are doing that because they no longer trust the dollar, which has been the reserve currency for decades. He says that they have concluded that it is losing value.

How Doug Casey wants you to invest in the Gold Spike?

Rather than buy gold coins and bullion, Doug prefers investing in gold mining companies. He goes for the small gold companies called “junior explorers” that are often so small that Wall Street doesn’t cover them.

He likes them for their volatility because they can generate a large profit almost overnight.

“Marginal, or ‘fringe’ properties tend to have the most upside. They also tend to be the most volatile.

That’s why you can often buy them for such low prices. Sometimes just pennies. But when a boom comes — like we’re seeing today — it’s these ‘marginal’ properties that have the most to gain.

They can go from being worthless to being worth hundreds of millions overnight. Although those are usually exploration, not producing, properties. Very risky, and not for most people.”

Out of the many mining companies in the world, he says that he has developed an approach that enables him to find the ones that are likely to soar by 500% or more. He calls it “The 9 P’s.”

In the summit, he doesn’t reveal what “the 9P’s” mean and says that if you want to learn more about them, you have to read a report he wrote called The Doug Casey Method to Investing in Gold Stocks.

In the presentation, he reveals his approach though. He says that he is not usually concerned with whether the companies he invests in will ever produce gold because he doesn’t intend to stick with them for long,

“That’s because we’re not investing. We’re speculating. So whether or not the gold companies we find ever mine an ounce of gold is largely immaterial, as long as the stock makes money.

The bottom line is, we’re not necessarily trying to capitalize on a company’s growth. That is a longshot bet.”

He bets on the volatility and hopes that as he owns a company, the market will be bullish causing his stock to soar. According to him, you don’t want to hold a position for too long because those small companies are like burning matches – if you hold for too long, they singe your fingers.

He says that he learns about the best stocks by making friends within the industry who inform him where the money is moving toward. He does this by visiting the gold mines personally and making acquaintances.

And that leads us to how he wants you to invest in the gold bull market.

He has written a report titled The Gold Spike Action Plan: Make 10x From the Biggest Gold Bull Market in Decades. It has the names of five small gold stocks that he would recommend.

Unlike what you’d expect of a teaser, he doesn’t describe them and merely says that if you would like to invest in them, you have to sign up for an advisory service called Strategic Investor.

Who is Doug Casey?

Doug Casey is one of the most well-known names in the world of newsletters. He founded Casey Research.

To say that he is a gold bug who strongly believes in investing in gold is fairly accurate because he has recommended up to 1,000 companies to his readers over the years. For example, he once recommended a gold exploration company that went on to grow 50 times bigger.

He has worked as a counselor to governments across the world and has brushed shoulders with people in authority like Bill Clinton, Dick Cheney, and Fidel Castro.

Doug has written or co-written more than six books, including a New York Times bestseller called Crisis Investing. In it, he predicted a crisis and made recommendations that were proven to be successful.

What is Strategic Investor? (The Newsletter)

Strategic Investor is a newsletter that is offered by Doug Casey and his group of investment analysts. That includes his Chief Geologist, Dave Forest, whose work I have reviewed here before, including presentations like The 5G Keystone Stock and Warren Buffet’s #1 Private Investment.

When you sign up for Strategic Investor, you receive his 5 gold stock recommendations, the two aforementioned special reports, and…

How much do you pay to join Strategic Investor?

The Gold Spike Summit was not a teaser like the typical presentations we have come to expect from newsletter gurus. It mainly promotes a newsletter called Strategic Investor and Doug Casey gets to talk us into investing in junior gold miners.

He argues that as the economy plummets and gold soars, the best way to invest in the precious metal is to buy junior gold miners because their volatility enables them to spike by a large margin in a short period – the downside is that they can also lose money very quickly.

If you agree with Doug and would like to follow his recommendations, only invest a tiny portion of your portfolio in them because they are purely speculative. He even admits that he doesn’t mind that the gold companies he recommends are not mining gold.