In Jimmy Mengel’s latest presentation, he talks about the creation of “The God Chip.”

In the header of the presentation, he quotes the Microsoft CEO who said, “The World Is Running Out of Computing Capacity.”

The God Chip is the solution to this problem and Jimmy goes as far as to say, “It’s set to unlock $17 trillion in new wealth and could make early investors as much as 6,893%.”

After sitting through the presentation, I put together this piece where I highlight the main points that Jimmy raised to help you decide whether it is a viable investment.

Introduction to Jimmy Mengel’s The God Chip? (The Pitch)

Jimmy Mengel starts the presentation by talking about a challenge that electronics manufacturers are now starting to grapple with. He talks about this being a bigger problem than many, including the federal government, are making it out to be. 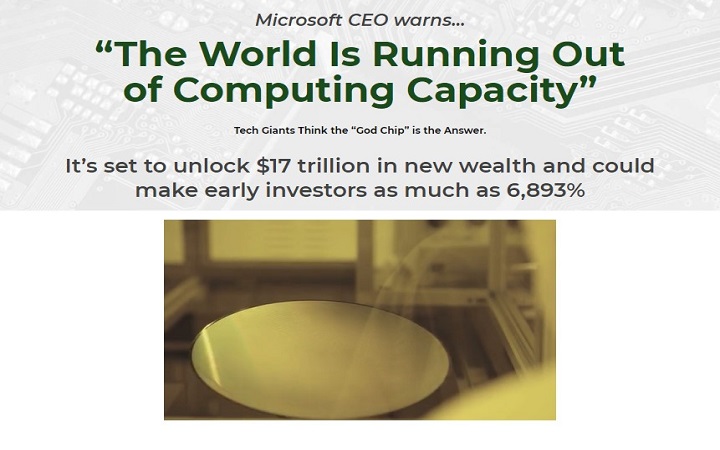 He begins by talking about an all-important shimmering element that is facing a huge problem. He says,

And right now, the industry that depends on it is facing a huge problem.

Few people are aware of just how deep the issue really goes.

President Biden knows this could quickly turn into a crisis and called for a $37 billion program to help.”

“Regardless of how much money Biden pumps into this sector, none of it solves a much bigger issue that’s been lurking in the background for years.

See, this industry’s over-reliance on this shimmering element could not only bring this industry to its knees, experts predict it could also cause an economic crisis.

Because this issue affects everything from electric vehicles to our communication systems to innovations like Artificial Intelligence and the internet of things. This shimmering element is Silicon, the basis of all microprocessors today.”

Microprocessors are in everything today and he says that the microchips we are making nowadays using silicon wafers are starting to fall short of our growing needs. He even brings up the rate of computing growth compared to data growth:

So, there is a chip shortage that is affecting multiple industries because traditional computing is dying. This has been brought about by Silicon reaching the limits of its capabilities hence Silicon-based chips cannot sustain the growth necessary for innovations like AI, 5G, and the IoT.

But Jimmy now claims that there is a technology that could be the solution to this problem and it could be as impactful as the invention of the computer itself.

This reminds me of Adam O’Dell (Imperium Technology) and Matthew Carr’s (Nexus Technology) who also went with this approach when they released their presentations.

Jimmy believes that those who understand this stand to make as much as 2,971% returns in as little as 12 months. He also says 10,550% is realistic in the long run thanks to an off-the-radar company that teamed up with the Defense Department to push the boundaries of chip design.

Jimmy says that the DoD invested about $1.5 billion into a project called the Electronic Resurgence Initiative that is run by DARPA.

He says that their revolutionary invention is likely to unlock $9 trillion in new wealth. It is a completely new way to manufacture chips. One that overcomes Silicon’s constraints.

What is God Chip Technology

This has to do with an element called Graphene. Jimmy says that its honeycomb structure allows it to be rolled up into tiny tubes which act as conductors.

Graphene is a material that was discovered in 2004. It is an atom-thick sheet of carbon atoms and this means it is technically a 2D material.

Ever since it was discovered, scientists have been testing it and so far, they have discovered that it has exceptional strength and it has excellent conductivity properties. He adds that its electrical conductivity is 1,000 times that of Copper and it is stronger than steel.

They have been creating kinks in a layer of graphene and discovered that this makes it behave like an electronic component. Given its small dimensions, they have figured that it can be used to make microchips that will allow manufacturers to build faster laptops and phones.

In the presentation, Jimmy says that it is the same material as the one in pencils. He is not wrong because graphite is also a carbon composite, just like graphene.

To make the God Chip, he says that billions of tiny one-nanometer graphene tubes have to be aligned perfectly across a 200 mm wafer that looks like this: 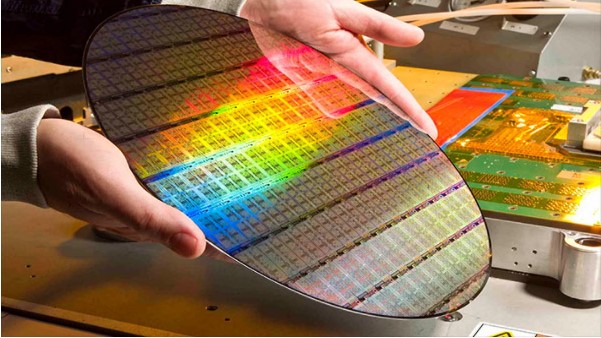 Not only does this minimize the energy costs but also it means that layers of tubes can be laid on top of pre-existing ones creating “3D Chips”, which was impossible with silicon-based technology because existing layers would melt at 900 degrees.

To add to that, graphene tube applications go beyond microprocessors because they can be used in lithium batteries,

Jimmy Mengel wants you to consider investing in a company from Massachusetts that manipulates graphene nanotubes to create better electronic components.

It found a way to manufacture microprocessors with one-atom-thick graphene tubes, which are extremely difficult to pull off.

The method they use for depositing the graphene tubes is called incubation. It is done by submerging the wafer in a bath of graphene tubes until the tubes stick to the wafer’s surface.

Although this process is incredibly difficult, the research team reduced the incubation time from 48 hours to 150 seconds. This means that the mass production of “God Chips” is possible now. In 2019, this company figured out how to manufacture a microprocessor with 1,400 transistors.

Here is more information about the company from the pitch, in Jimmy Mengel’s own words,

“It is not an unproven penny stock. It has customers across many sectors, including aerospace, defense, automotive, healthcare, and energy.

It is a supplier to Apple, Dell, Raytheon, Lockheed, Cisco, and HP…

And its technology is protected by an astonishing 14,000 patents.

That’s right, this company could’ve made you 10 times your money already.

But since it’s more than 12 times smaller than Intel, there’s still huge room for growth. And with the “God Chip” hitting the market soon, I expect it to shoot to the moon.”

He says that he expects a huge announcement from this company very soon and when this happens, investors will rush to buy up the stock in droves.

Institutional investors like Vanguard, BlackRock and JP Morgan have already invested in this company and own 95% of the shares available. Which, according to Jimmy Mengel, means that these investors are sensing an impending transformational shift.

He wrote a report about this company and the dossier is called “The ‘God Chip’: The Semiconductor Revolution for Five-Digit Gains.” It has the name and ticker symbol of the company and to get your hands on it, you have to sign up for the newsletter called The Crow’s Nest.

Who is Jimmy Mengel?

Jimmy Mengel is an investment analyst who is part of the editorial team at the Outsider Club. The Outsider Club is a financial publishing company based in Baltimore.

Jimmy Mengel is the main editor of the Outsider Club where he has been providing his readers with the stories behind the mainstream financial news of the day through his publications. He is the editor of The Crow’s Nest.

He considers himself a true outsider in the world of finance because he did not work for a big investment bank or firm. He was born in Baltimore and he studied Journalism and English at Towson University.

Jimmy Mengel has a passion for topics like government malfeasance, natural health, civil liberties, and how politics and finance influence each other. He is a frequent guest on CNBC and his writing has been featured on Healthier Talk, Wealth Wire, Outsider Club, Green Chip Stocks, and Health Wire.

The Crow’s Nest Review: What is it About?

The Crow’s Nest is a financial newsletter that is published by the Outsider Club and edited by Jimmy Mengel.

On the official website, they describe this newsletter as follows:

“In each issue, we’ll give you a way to set yourself up to safely and effectively grow your wealth. We’ll show you exactly how to: -Easily beef up your retirement savings with dividend superstars and easy to use ETFs that will beat most high end money managers time after time – and without shaking 3-4% from your retirement account in outrageous fees. -Grow your wealth with alternative investments your broker won’t even tell you about. -Shave thousands off of your tax bill by exploiting simple legal loopholes, creating your own financial trust and shifting your money into tax-free accounts so you can keep what you’ve rightfully earned. -Implement easy everyday ways to save thousands a year by plugging the leaks in your current financial strategy. The most important part is we’ll show you how to do it all yourself.”

This goes to show that this newsletter is designed to help you improve your finances in multiple ways. For example, in the presentation, Jimmy Mengel advises you to take a punt on new technology by investing in a company right in the middle of these investments.

“The ‘God Chip’: The Semiconductor Revolution for Five-Digit Gains”

This is the main report you get summarizing everything Jimmy talks about in the presentation. He focuses on the company he is touting and describes its innovation, the engineers working on the innovation, and how the market will change when it takes hold.

What you get when you join The Crow’s Nest

If you join the newsletter through the link provided at the end of the presentation, you get the following as part of your membership:

This report is about a cellphone tower company that builds, maintains, and leases its towers both in America and abroad. It is a 5G income play because it is set up to pay 90% of the money it makes to its shareholders.

Bonus Report #2: “The Only 5G Stock With Trillion-Dollar Potential”

In the past ten years, this company has been planning for the 5G revolution and Jimmy Mengel believes that it could rake in winnings that could be in the trillions.

How much is the Crow’s Nest?

A one-year subscription to the Crow’s Nest is $199

Yes, it does. It comes with a 6-month money-back guarantee that enables you to cancel your membership within 6 months of signing up for it and you get a full refund.

When Jimmy Mengel talks about “The God Chip,” he is talking about graphene being used to create microchips.

So far, scientists have shown that they can manipulate graphene (and other 2D materials) by creating origami paper-like kinks on them thus creating smart electronic components like transistors or logic gates.

A transistor made of graphene can overcome the hurdles faced by a silicon-based transistor. This is significant because it could allow for smaller and faster computer chips.

It is worth considering that since it was discovered in 2004, graphene hasn’t broken into the microprocessor industry as it should. This means that Jimmy is speculating about its success. However, that doesn’t mean that it is a lost cause because it took over 100 years for the first silicon chip to be made after the material was discovered in 1824.