Michael Robinson recently released a presentation about what he refers to as THE GLOBAL RACE FOR $3.1 TRILLION.

It is about the race to dominate a technology that will make the investors of the company that wins it rich. So, what’s this all about?

I sat through the presentation and put together this article and in it I reveal the technology Michael is referring to and how you can invest in it.

What is The Global Race For $3.1 Trillion? (The Pitch)

The Global Race For $3.1 Trillion is a presentation by Michael Robinson that centers on new technology.

He starts things off by talking about “a new global ‘technology war’” that has got the Department of Homeland Security declaring the new technology a “critical infrastructure” for the health of the economy and the CEO of Nasdaq proclaiming that it is “the biggest opportunity […] over the next decade.” 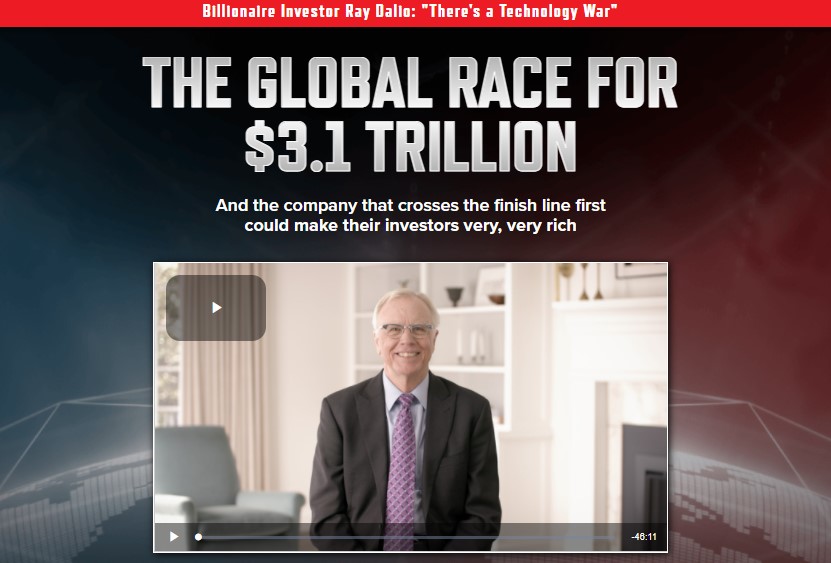 He says that America is warring with China over who will dominate the technology that will change the way we live our lives and usher in a new era of prosperity.

I won’t keep you in suspense any longer, the technology he is referring to here is the Blockchain.

The Blockchain has been a popular subject amongst investment gurus as I have so far reviewed a couple of presentations on the same, including The Weiss Crypto Investor by Martin Weiss and 2021 Crypto Millionaire Forecast by Matt McCall.

Going back to Michael’s presentation, he claims that the blockchain could add up to $3.1 trillion to the global economy over the next ten years. He then says that well-known investors are putting money into it and the biggest American companies have started working with it.

After going on about how China and America are tussling over who will come out on top, he defines it as follows:

“Basically, the blockchain is a platform that stores and sends information.

But that’s a VERY simple way of putting it.

What blockchain does differently is that it stores information in a way that is more efficient and secure than any of our existing networks in the world.

It does that by creating a special record that can’t be changed once it’s created.”

He also touches on the applications of the Blockchain, which he elaborates with an example:

“Like I said before, the blockchain creates an unchangeable electronic record.

No company would do business with someone who can change the terms of a contract AFTER it’s signed. Or just walk out of a deal and pretend it never existed.

That’s why we have elaborate processes set up to make sure that businesses can operate safely and abide by all laws.

And the bigger the business is, the more complicated and costly that process becomes.

It’s one of the biggest industries in the world – almost $10 trillion.

The biggest shipping company, Maersk, is worth $341 billion. They’ve been working with the blockchain since 2018.

They’re operating in over 135 countries and employ more than 120,000 people around the world.

As you can imagine, the shipping business is very complicated.

Right in this moment, there are at least 20 million containers crossing the globe.”

So, in this example, he says that logistics benefits from the Blockchain’s utility. And he goes on…

“You know, Megan, each of those 20 million containers crossing the globe has to know exactly where to go, what’s in them, and where they came from.

One mistake or change in this process could create huge delays – and huge losses – for a company like Maersk.

But the blockchain keeps all that information secure.

Remember, it can’t be changed.

Once that container route is logged on the blockchain, it knows exactly where to go.”

And he is right on the money with that one because one of the most commonly touted applications of the Blockchain is public record keeping. It ensures that data is kept secure in a public ledger. Therefore, it can streamline such complex operations as those involving massive shipping companies in the example he provided.

He takes it a step further and says that it will create $500 billion in additional revenue for logistics companies in the coming years.

How Michael wants you to invest in The Blockchain

Michael points out that the government is working closely with the private sector to grant the US superiority over China and he has identified one company that is leading the way in this.

“In the past, they’ve worked with the U.S. government on every major technological project. For example…

They provided some of the technology used in the Mars Lander that was launched in 2008.

Before that, they received contracts from the government to modernize U.S. air traffic control for the Federal Aviation Administration.

They received several contracts from NASA throughout the years, one of them to build computer parts for one of the space shuttle missions to the moon.

And he believes that they have the advantage because they began thinking about blockchain early.

“And they got involved early.

Back in 2016, when almost no one was talking about this technology…

They were boasting about putting almost $200 million into blockchain.

Their team filed for more than 200 patents in this space over the last few years.

Some people thought they were nuts to put so many resources into what was back then a fairly narrow and unproven technology.

Today, they control more than 200 different applications of blockchain.

They have some of the largest customers for blockchain in the world… Including a huge food retailer and several shipping companies that together cover almost half of the world’s shipping market.

They even built a blockchain platform for the Bank of Thailand and India’s largest telecommunications company.”

Without even exploring more clues about it, I think Michael is referring to International Business Machines Corporation (IBM), which is more popularly known as IBM. It is a multinational corporation that has been around since 1911.

IBM produces and sells computer hardware and software, offers hosting and consulting services, and holds the record for most US patents. Unsurprisingly, it was involved in the Manhattan Project where it provided punch-card style computers that were used for computation as scientists were working on the bomb.

In 2016, it announced a partnership with China’s UnionPay Bank and a $200 million investment in its IoT headquarters to fund Blockchain developments.

It collaborated with the Bank of Thailand to launch a government savings bond based on Blockchain technology – a first of its kind in the world.

Without question, all the clues Michael gives point to IBM.

It is one of five companies that are in a report he wrote called The Global Blockchain Project – 5 U.S. Companies Leading The Race To $3.1 Trillion. To get the report for free, you have to sign up for an advisory service he edits called The Nova-X Report.

Who is Michael Robinson?

Michael Robinson is a tech investment analyst who has been in the business for 40 years. In that time, he has witnessed the launch of some of the most advanced technologies. For example, he claims to have been one of the early supporters of Bitcoin, before it made some people millionaires in a few years.

He is an advisor to 12 tech startups in Silicon Valley and was in the room when cloud computing was launched – it is now a global industry worth $266 billion. He is also a consultant and former board member at a venture capital firm.

He has been featured on Bloomberg, CNBC, Fox Business, New York Times, and The Wall Street Journal.

He publishes newsletters at Money Map Press, an independent financial publishing firm that works like Agora Financial or The Oxford Club.

What is The Nova-X Report? (The Newsletter)

The Nova-X Report is an investment newsletter that is headed up by Michael. He publishes it at Money Map Press.

He focuses entirely on the tech and innovation markets and recommends the best investments in those fields.

How much do you pay to join The Nova-X Report?

If you join via the link in the presentation, you pay $39 for a one-year subscription.

Closing Remarks on The Global Race For $3.1 Trillion

The Global Race For $3.1 Trillion was merely meant to promote Michael’s advisory service, The Nova-X Report, although there is more to it than that.

For example, Michael tells us that with every major technological advancement, there are pioneers who jump on board early when the technology is starting to mature. In this case, the technology he is referring to is the Blockchain and he says that regular people can make a fortune on it in the coming years if they get in before the rest of the world with $3.1 trillion in new wealth at stake.

He has identified various companies he wants you to consider investing in (one of them is IBM).

Although Michael makes it sound like a sure thing, do not follow his advice blindly because he may be wrong. And if you are going to invest, do not commit more money than you are prepared to lose.