He is known for making bold predictions about the technology sector and this newsletter embodies that.

In this article, I will dissect it to help you understand how it works in case you want to join it.

What is The George Gilder Report

The George Gilder Report is an investment research service that is published by Three Founders Publishing and headed up by George Gilder. People who used to follow Gilder more than twenty years ago consider it a reincarnation of Gilder’s popular nineties newsletter, The Gilder Technology Report. 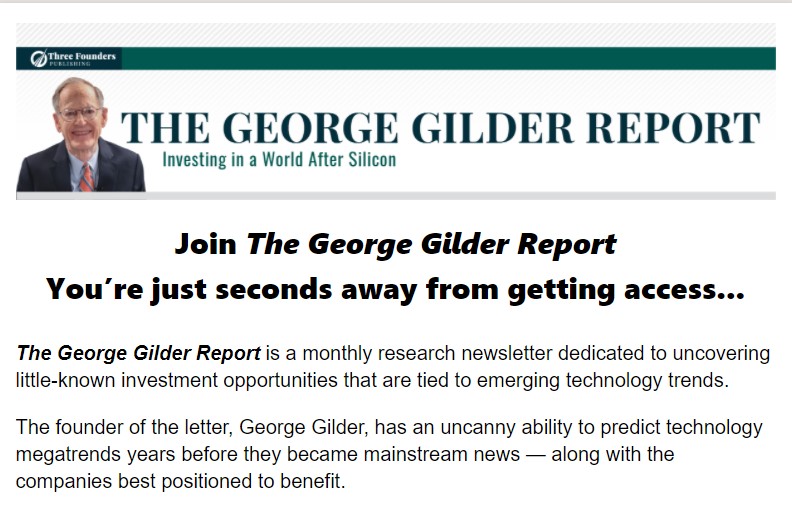 Back then, he would recommend tech stocks and he did quite well.

After his successful run in the nineties, Gilder took a sabbatical and when he reemerged The George Gilder Report was one of the newsletters he started publishing.

He started offering The George Gilder Report newsletter in June 2019. Through it, George is uncovering little-known investment opportunities involving emerging technological trends just like he did with The Gilder Technology Report.

Gilder relies on his experience and analytical skills to predict technology trends years before they reach the mainstream. Along with that, he also identifies and recommends companies that are poised to benefit from those trends.

How does The George Gilder Report work?

I have encountered a few presentations that George has put out to pitch the newsletter and since they give us an insight into his thought process as he picks his stocks, I will briefly go over two of them to demonstrate how he operates.

In this presentation, George Gilder tells us that there is a new development that will render 5G obsolete on arrival. It has to do with the unlicensed part of the electromagnetic spectrum that was recently “released” by the FCC in what he refers to as Docket 18-295.

He tells us that since the FCC opened up 6Hz of the spectrum to Wi-Fi and other unlicensed uses, we will have access to faster internet (it is only logical because with more bandwidth, Wi-Fi routers will accommodate more users and there won’t be the typical drag that overuse causes on current networks).

Technically, the 6Hz band does not make 5G obsolete but since it allows Gilder to tell us we will get “faster internet,” he runs with it.

He recommended three companies to his audience back then (and you can find out what those companies were by reading my review).

Strikingly, they were big, stable companies.

In this one, he tells us that the most successful companies in the world, built on the “big data” model, are based on a flawed system. Think of Google, Facebook, and all the other juggernauts that gobble up mountains of people’s data in exchange for “free services.”

He says that due to the susceptibility of the big data model to insecurity, this model will fall. It will be replaced by a new system called “the cyptocosm,” which is just a term he coined to refer to the Blockchain. All the details regarding this are in his book, Life After Gooogle.

He says that a blockchain system will usher in the next generation of technological advances.

The main takeaway from sampling those presentations is that when you join The George Gilder Report, expect him to come up with bold predictions about big changes to the status quo.

Who is George Gilder?

George Gilder is an investor, writer, and economist. He is also one of the key investment analysts at Three Founders Publishing, an investment research firm that publishes investment advice targeting retail investors.

At the firm, he is considered the most knowledgeable person when it comes to predicting the future of technology and its impact on people’s lives. His work centers on foreseeing how breakthroughs will pan out, years in advance.

His skills came in handy for his followers in the tech boom of the late nineties that culminated in The Dot Com Bubble. He was one of the most sought-after stock pickers back then as he ran the highly successful Gilder Technology Report through which he racked up triple- and even quadruple-digit returns for his readers.

Gilder has been featured by The American Spectator, Wired, Forbes, The Economist, Fox News, The Wall Street Journal, Playboy, Harvard Business Review, and People, among other platforms.

What are the benefits of joining The George Gilder Report?

When you sign up for The George Gilder Report, you receive:

How much do you pay to join The George Gilder Report?

An annual subscription costs $299 although he offers discounts whenever he releases a presentation promoting the newsletter.

Does The George Gilder Report have a Refund Policy?

The George Gilder Report is a technology-based investment newsletter that focuses on emerging trends.

It is a testament to Gilder’s predictive abilities that have stood the test of time because he started writing about technology trends long before the 1990s tech boom. In this newsletter, he wants to keep writing about the megatrends that he identifies moving forward and the investment opportunities they create.

He hopes his new newsletter will be as successful as the previous one where he helped his followers to profits that went as high as 1,008% (he even once recorded a return of 19,295% on one of his recommendations).