Andrew Keene sat down with Gabriel Oropollo, director of client relations at Money Map Press, to talk about his investment strategy in an event called “The Four Step Profit Formula.”

Andrew claims to have created a trading strategy that earns him an average gain of 47% per trade and says that his results are based on real trades, not backtests.

I sat through the presentation and put together this presentation to give you an overview of his approach so you can decide whether it is worthwhile.

What is The Four Step Profit Formula? (The Pitch)

The Four Step Profit Formula by Andrew Keene was meant to pitch his investment strategy as well as his advisory service, named Super Options. 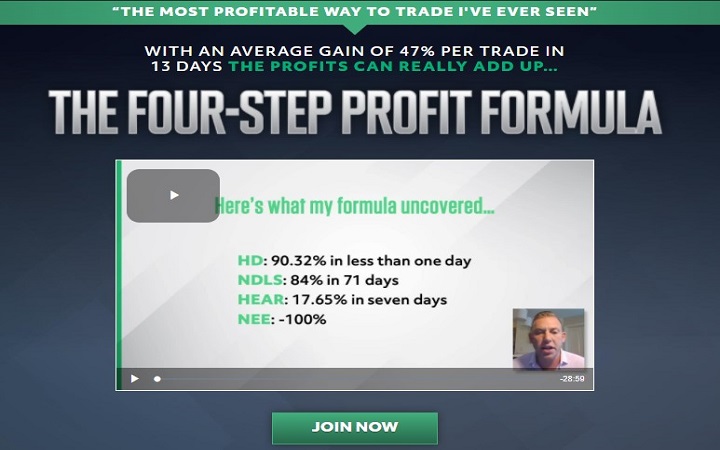 Keene says that the key to becoming a successful trader is to ignore what the talking heads on TV are saying and focus on tracking institutional order flow. He says that when you pay attention to the news, you lose sight of what is happening in the market.

The host, Gabriel, says that Andrew’s approach has had a 71.11% win rate and that if you count both the winners and the losers, he recorded a 47% gain in just 13 days. That all sounds impressive but the question is, how does he do it?

Keene breaks it down into these important elements:

He says that focusing on those elements enables him to filter out the noise – what talking heads are saying on TV.

When it comes to evaluating the trades, Keene takes into consideration four factors, which form his four-prong system. They are:

When Keene finds his ideal stock, he trades options on it.

In the presentation, he gives a recommendation for free. Here is how he describes it:

“So here is your trade action to take: Buy-to-open Halliburton, ticker symbol, HAL July 16, 2021 $25 calls for no more than 43 cents. Profit targets: Sell 50% at $65. Set your final profit target at $85. And there’s always a chance that Halliburton could gap higher, which could give us even higher profits. So you can get in this trade for less than $50.”

Who is Andrew Keene?

Keene’s entry into finance was eventful; he was fired from his first job as a bank analyst for sleeping on the clock. He then took on a corporate job before he decided to become a clerk at the Chicago Board Options Exchange where he says he learned how to trade. After nine months, he was promoted to a floor trader and then decided to start trading with his own money.

He lost his money, move to Thailand where he taught English at a Buddhist Monastery for six months before returning to the country after discovering a new trading strategy. When he came home, he implemented this strategy and reports that he started making more money than he ever imagined. He started writing about his investments and got into the world of newsletters.

What is Super Options? (The Newsletter)

To gain access to Andrew’s new strategy, you have to subscribe to The Super Options advisory service. It is a new advisory service through which he recommends options trades to his followers. I have done a comprehensive review of it that you can read here.

When you sign up for it, here is what you get as a member:

How much do you pay to join Super Options?

If you join via the presentation, you get to pay $1,550 for a one-year subscription.

Here is what Gabriel says about refunds:

“This is a nonrefundable purchase. However, there is a performance guarantee which we stand by. We guarantee that you’ll see 20 triple-digit winners in the next 12 months. If not, you get every penny of your subscription back.”

First, The Four Step Profit Formula presentation was released to promote Andrew Keene’s Super Options trading service. In the process of doing that, he talks about his investment approach that can be summarized as follows: He monitors what sectors the smart money (hedge funds and institutions are investing) is moving into and focuses on them. He then evaluates the stocks within the chosen sector using his four-prong system to find the best plays. Finally, he finds the appropriate options trades and recommends them.

These recommendations are sent to his Super Options subscribers. He keeps it simple and only recommends calls and puts.

Before you sign up for his newsletter, you should find out more about it and what his track record with other users is. If it is good and the investment strategy suits your goals, you can give it a try, otherwise, find another analyst or newsletter.