He is quoted saying, “The stock market will climb more in the next 10 years than it has over the last 100 years” and as the presentation progresses, he teases a stock that he expects to rise by over 1,000% in the next ten years.

In this review, I walk you through the presentation highlighting the key talking points and if you would like to learn more about it, I hope you find this helpful

What is The Final Bull Market?

The Final Bull Market is a presentation by Ted Bauman where he is interviewed by John Burke. The discussion centers on the direction in which the market is headed and how investors can capitalize on that to make money. 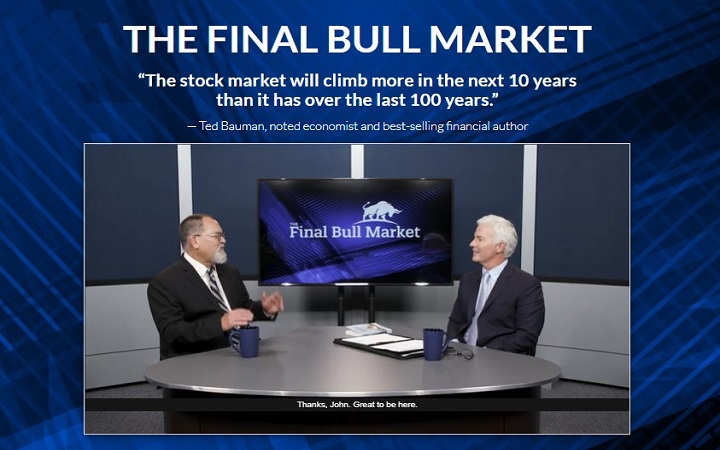 John Burke starts the conversation by citing how the stock market has been volatile in the past few months. He says that many investors aren’t sure what they should make of it because they are bombarded with contrasting headlines every day.

Amid all the chaos, he says that Ted is the right man to bring clarity because he is “the very man who’s already guided over 100,000 Americans with his investment insights” and that “[he] is going to reveal why the stock market will climb more in the next 10 years than it has over the last 100 years.”

So, Ted believes that for the next ten years, the markets will be bullish and he calls this phenomenon “The Final Bull Market.”

Why is he predicting this when other analysts like Jim Rickards and Martin Weiss have been telling people that the market is about to tank?

His justification is that after studying the cyclical nature of the market, he can determine that the next couple of years will be bullish. He says,

“Sure, it comes down to the chart that you shared earlier. This is a chart of the S&P 500, basically, the stock market, dating back 100 years … as far as it goes back. And at first, you don’t notice much.

But let’s take a closer look. Notice that pattern?”

This is the chart he shows that has this pattern: 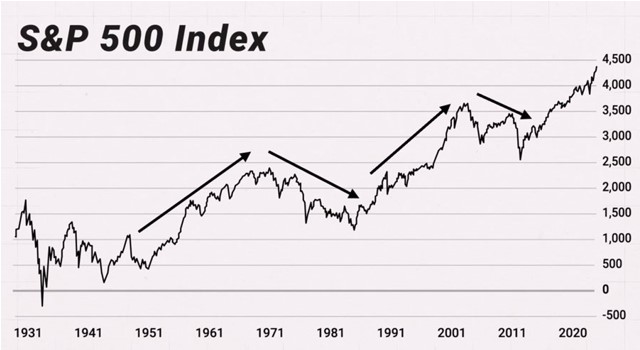 In showing those charts, he wants his audience to see that there is a pattern that can potentially be extrapolated. However, as that second chart shows, there always tends to be a correction where you should hold your positions as you await the next bull market.

Ted Bauman claims that most investors make the mistake of panicking in the middle of a bull market when they encounter a slight downturn (when there is a correction). They then exit the market and miss out on the gains that come after the fact.

Ted says that we are in the middle of a bull market and that he is certain of this because three big factors always line up in a bull market.

“Sure. And, this is where it gets really interesting. You see, there are three big factors that have fueled every one of these massive bull markets over the last 100 years, and all three factors are now present in this current bull market.”

What are the three factors? He explains this in his blueprint,

“Ted: Sure. It really boils down to the exact same three factors that drive the bull market. People, money and innovation. That’s the simple blueprint. If a company has these three catalysts, profits are practically a foregone conclusion.

John: So break this blueprint down for us a little.

Ted has identified one company that he expects to do well in the bull market. It is his number one recommendation.

Ted’s number one stock pick is “An overlooked company leading the way in an industry that’s on the verge of soaring 1,000% over the next decade.”

This is a common theme amongst newsletter writers; claiming that they have found a great company that is “relatively unknown.”

Ted Bauman says that he has identified a company in the Electric Vehicle (EV) market. He says that the EV market may grow over 1,000% over the next decade because the US government is invested in it.

His recommended pick will benefit from that and he wants his audience to consider going for it.

From the presentation, what do we know about this mysterious company?

Here is how he describes it,

Motors, chassis, driveshafts, powertrains and control modules. Everything from bumper to bumper.

John: Got it. So, it really is the key to unlocking this entire industry.

Ted: It is. It even makes advanced driving assistant technologies that allow your car to park itself, break on its own, avoid major accidents … and of course, it’s working toward going completely hands-free.

It’s the one that will make autonomous driving go from a dream to a reality.

John: So, slap whatever name brand on it that you want to in the end … THIS company can produce the parts for cars and trucks … any vehicle you want.

Ted: That’s the beauty of it.

It already assembles cars for some of the biggest and most respected names in the industry — Chrysler, Jeep, Mercedes, Jaguar, BMW, Toyota, and more. Now other companies are turning to it as they transition their cars to electric power.

Fisker, an EV company known as the ‘Tesla Killer,’ recently partnered with them.

John: So this company is generating a ton of business right now.

In fact, insiders are saying my No. 1 company is a top contender to manufacture the Apple iCar. I’m sure I don’t need to tell you how huge that would be.

It’s just one of the reasons TD Securities recently came out giving the company a massive buy rating.”

He wrote a report where he provides the name and stock symbol of the company and it is called The Company Quietly Fueling the $1.3 Trillion EV Boom. To get your free copy, you must sign up for The Bauman Letter.

Ted Bauman is an investment guru who publishes his advisory services via Banyan Hill Publishing. He joined the firm in 2013 and he is in charge of The Bauman Letter, Profit Switch, and Bauman Daily.

He has spent his life helping people accumulate wealth and attain financial freedom and he considers his newsletters a natural extension of this mission.

Son of Bob Bauman (the former congressman), Ted Bauman was born in Washington DC before moving to South Africa in search of adventure. He went to the University of Cape Town and graduated with postgraduate degrees in economics, economic history, and politics. In his 25-year career in Africa, he served a couple of executive roles in the non-profit sector. His most notable one was working as a fund manager for low-cost housing projects.

He left his job in 2013 to work as a researcher and writer full time. Since his career before that took him to various countries, he says that he learned from his experiences that you can grow your wealth and live the life you always dreamed of.

Ted Bauman has been quoted by financial publications like The Guardian, Benzinga, MarketWatch, Forbes, and Barron’s.

The Bauman Letter is a financial newsletter that is published by Banyan Hill Publishing and overseen by Ted. 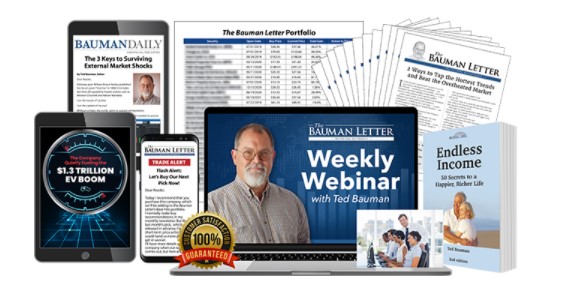 In the presentation, he mentions that although he is a trained economist, he doesn’t pick stocks on his own. He has an entire team of researchers that comb through the data using top-of-the-line tools.

When you become a member, you are entitled to:

I should clarify that the free special report and the book are what you get when you sign up through the link provided at the end of the presentation. You may not necessarily be entitled to them if you join The Bauman Letter some other way.

How much is The Bauman Letter?

There are three subscription tiers for The Bauman Letter:

Premium subscription is the “recommended” option and it costs $79 per year. There is nothing more to it than just the subscription plus two extra reports: Collect Endless Income From the $13 Trillion 5G Revolution and Investing in America’s Smart Energy Superstar

A Deluxe subscription is the most expensive option because it costs $129 for an annual subscription. It is expensive because, in addition to the digital element, you also get a print version of the newsletter.

The Standard subscription, which costs $47 per year. It is the cheapest option but that doesn’t mean that it is not any good. It is sufficient if you are interested in getting access to Ted Bauman’s insights. 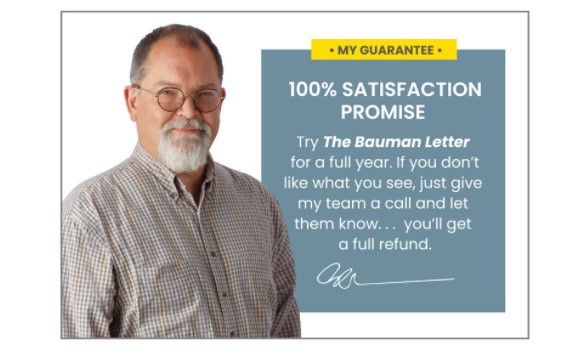 Ted Bauman says that we are in the middle of a bull market and brushes off any claims to the contrary. He says that volatility is to be expected and whatever you do, you have to ignore that noise. He says that when the bears get on TV, they spread fear instead of sticking to the facts.

He wants his audience to be comfortable with the fact that volatility is always going to be part of the equation so they can wither storm when the market goes into a temporary correction.

However, don’t just blindly follow his advice because the market can spring a surprise. Timing the market is a futile exercise because the past is not always an accurate predictor of the future.