Have you recently stumbled across a presentation by Casey Research that claims to offer you “Your Last Chance to Become a 5G Millionaire”?

Well, I also got an invitation to check it out and as I found out, it concerns a ‘government-tech alliance’ that could push a couple of tiny 5G stocks 10X higher.

After going through it, I decided to write this article to give you an overview of what the nearly hour-long video is about as well as reveal one of the stocks that were being teased. Hopefully, you will find this helpful.

The Final 5G 10-Baggers was presented by Jon Alexander and he interviewed John Pangere. The whole thing was set up to promote Pangere’s Strategic Trader newsletter.

But before they got there, the two gentlemen were talking about a new and “urgent” 5G development that “could mint the final round of 5G millionaires.” 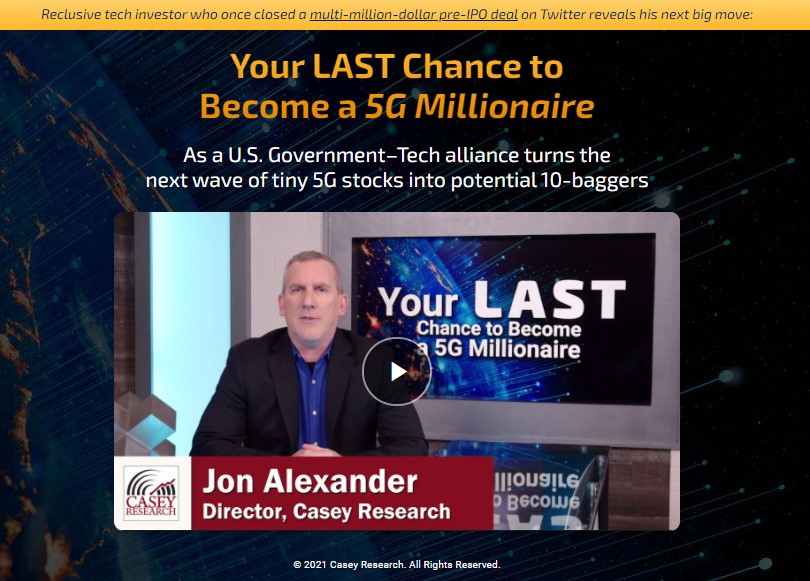 Over the past few months, 5G has been on most investment analysts’ lips with each of them teasing companies they expect to do well as the 5G rollout takes shape. I have reviewed presentations like The 5G Keystone Stock (Dave Forest) and 5G Volta (Keith Kohl) that all follow this theme.

So what angle did Jon and Pangere take with this pitch?

They decided to base their argument on the “Secure 5G and Beyond Act of 2020” that was signed by Trump on March 24th 2020 that, according to the two men, created another opportunity for investors to cash in. Here’s how Pangere put it:

“Yes, in fact Trump did something that no president has done before.

He authorized the release of a once-forbidden Wi-Fi frequency for 5G to work on, across all networks.

This new frequency ‘will be crucial for next generation networks,’ according to Doug Brake, a government broadband expert…

But until now, it was locked away for the last 50 years.

As a result, AT&T and Verizon have been forced to test their 5G networks on lesser Wi-Fi frequencies, such as Millimeter Wave (MW).

It set them back months.

But now, thanks to Trump’s authorization, the 5G rollout is about to go “fast-forward.”

At a major tech event held recently, mobile carriers and networks had the chance to access this once-forbidden frequency to upgrade and fast-track 5G.

They’ve formed a government-tech alliance to make this frequency the ‘U.S. standard’ for 5G.

And this is where the pitch gets a bit technical because the conversation segues to the electromagnetic spectrum with respect to 5G. 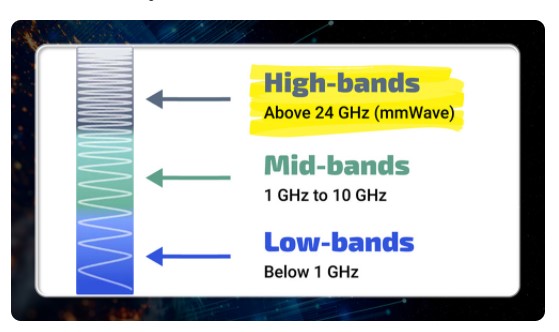 John breaks it down as follows:

The government licensing out the mid-band frequencies is what that whole “government-tech alliance” I mentioned earlier was all about.

Now that the mid-bands will be released to the carriers, John sees this as the “final chance to get in to join the ranks of 5G millionaires.” And he has identified two stocks that he thinks have the potential to deliver the millions.

The two companies to invest in

Here is how he describes the first company:

“They’ve [internet service providers] turned to a tiny company — with over 200 patents — for help.

What this company has done is incredible.

A hospital, a school, a skyscraper…

With the flip of a switch.

And you can connect up to 15 mobile devices (phones, laptops, tablets, and even computers) to the new 5G frequency.

It’s like having your own private, secure 5G network inside your home or office.”

He even quotes Tami Erwin, VP at Verizon, saying:

And all those clues lead to a company called Inseego (INSG). I traced Tami’s quote to a 2019 article on Verizon’s website that clarified that the company had launched Inseego MiFi routers nationwide.

This is not the first time that a guru is teasing Inseego as we saw a couple of months ago when Ian King released his pitch about Fluorescent Sand.

Moving on to the second one, here is how he describes it:

That beams the new 5G frequency through microwave signals IN THE AIR.

And it travels through air 50% faster than light can travel through fiber optic cables.”

“Nearly all federal agencies, including…

The Department of Defense…

They’ll all run on the company’s blazing fast system…

Along with 24 states… including Colorado, Nevada, Iowa, and Kentucky.”

“The 5G booster’s CEO revealed a top U.S. mobile carrier is using its tech to increase 5G capabilities and bandwidth.

And top players like Verizon, U.S. Cellular, and even Digicel Pacific already use this firm’s technology.”

Unfortunately, this one was a bit tough to crack because I couldn’t find a good fit for the clues he gave and I don’t want to mislead you. So, I’ll just leave it at that.

John wrote a special report called The Final Wave of 5G Millionaires that has all the details regarding the two companies. He is giving away free copies of it to people who sign up for a newsletter called Strategic Trader.

John Pangere started his career in finance at a prop trading firm in Chicago. He joined it after the Financial Crisis of 2008 at a time when the market had just crashed.

He specialized in venture capital investing where he helped raise tens of millions of dollars for deals with valuations of over $1 billion. He even did a pre-IPO deal on Twitter and was recently involved in an angel-stage deal on a tiny battery company.

He is a quantitative analyst (quant) who develops mathematical models to analyze small tech stocks, currencies, and futures.

Pangere considers himself a tech insider and angel investor with access to early-stage deals that “99% of investors can’t access.”

What is Strategic Trader? (The Newsletter)

Strategic Trader is an investment advisory service that is published by Casey Research and edited by John Pangere.

John’s approach is to find explosive small-cap companies with massive trends behind them that trade at cheap prices with the expectation that they will earn you a massive return.

When you become a member of Strategic Trader, you get:

How much do you pay to join Strategic Trader?

In the presentation, they say that you can get one year of the newsletter for $2,000.

But this was after John had “a bit of back and forth” with the publisher to bring it down from its usual price of $4,000.

They don’t refund your cash. Instead, you get a “full credit refund” which just allows you to use your money on another service offered by Casey Research or its corporate affiliates.

If you’ve been reading my articles in the past few months, you are no stranger to this kind of presentation where a guru promises to reveal the companies that will soar when 5G is widely available.

There is a whole lot of déjà vu here with Inseego (INSG) – one of the stocks being teased – having been teased by other gurus before. As I write this at the beginning of February, the company has been on a rally since mid-November last year, going up by more than 100% in that period. It’s hard to tell whether it will be a 10-bagger (go up 1,000%) so we’ll just have to leave it at that.

The pitch was ultimately meant to get you to sign up for Strategic Trader ($2,000/yr non-refundable). It’s up to you to decide whether you like John’s approach enough to fork out that amount of money for his non-personalized insights.