Banyan Hill’s Ian King recently released a presentation with the heading “The End of the Dow.”

It is about a bold prediction he is making about the market (and no less about the Dow) that he wants you to take seriously because he claims to have accurately called the 2008 Crash.

In this article, I will provide you with an overview of what Ian King talked about in the presentation as well as reveal his number one tech stock for 2021.

What is The End of the Dow? (The Pitch)

The End of the Dow is a presentation by Ian King in which he promotes the Automatic Fortunes newsletter.

Ian starts the presentation by talking about an imminent tech boom that he believes will change the way we work and the way we live our lives. He says that we are adopting new technologies like IoT, AI, 5G, and other innovations at a staggering rate. 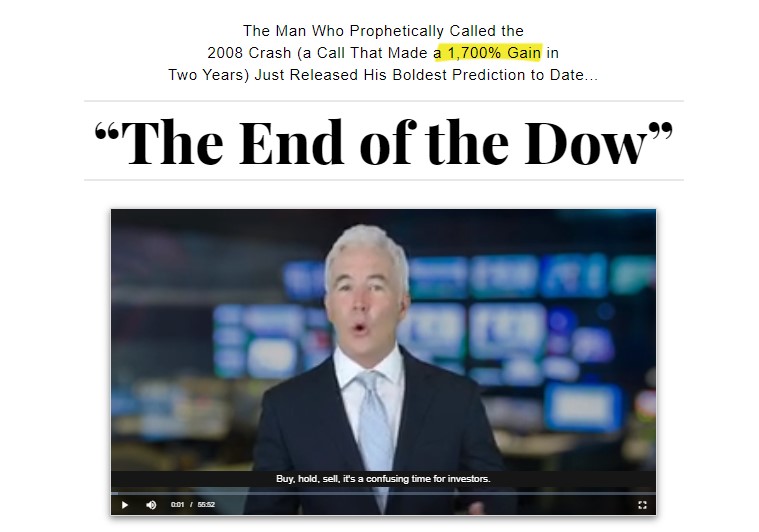 Consequently, companies like DocuSign, Doku, Amazon, and Zoom that have benefited from these trends have soared.

He also believes that we are in the innings of a tech boom that we should take advantage of by investing in the right companies.

He says that all successful tech companies go through three stages before they become household names. This is what he calls “The Innovation Breakout Curve”

Therefore, he believes that you should invest before it breaks out at the beginning of stage 2 and sell as it enters stage 3.

To determine what companies he invests in, he says that they must satisfy 5 metrics:

At the same time, he also warns you to avoid companies that are in the Dow that become encumbered by bureaucracy, which stifles innovation and makes them complacent. These companies usually have a phase 4 (Demise): 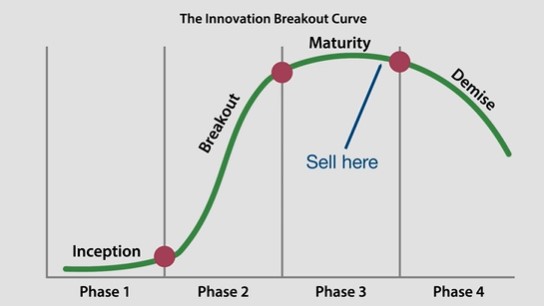 Ian King has found one stock that he feels has the potential to skyrocket in 2021.

“I want to give you my No. 1 stock to buy right now … a company crowned the most disruptive stock in the world.

I think buying it today could be like buying Apple or Amazon early on….”

He says that “it is disrupting the $74 billion payment processing industry.” It is a leader in the financial technology (fintech) industry where it enables people to turn their smartphones into cash machines.

Why is he optimistic about it?

According to Ian, it is a disruptive company likely to soar 1,000% in the next ten years. To learn more about it as well as find out how to invest in it, you should read Ian’s research report called How to Make a Fintech Fortune. Inside, he reveals its name and stock symbol. You can get it for free if you sign up for Automatic Fortunes.

Fortunately, you don’t have to sign up for the newsletter just to reveal the name of that company because after doing some research, I have found out that the fintech company he is talking about is Square Inc. (SQ).

Interestingly, this is not the first time he is teasing the company. He did it before in a presentation he did called The Big Rip.

The clues add up because David Tepper, Joel Greenblatt, and Ken Fisher were all investors at some point although their stakes have changed significantly. Joel and David have sold shares but they have retained some.

Arguably the biggest hint is the fact that Jack Dorsey, founder, and CEO of Square is also the founder and CEO of Twitter. He was also on Disney’s board for five years before he left in 2018 due to a conflict of interest.

Ian King is a former hedge fund manager who now works as a professional investment analyst. He is also a trader with over two decades of experience analyzing financial markets and trading.

He started trading at Salomon Brothers where he was a desk clerk in the famed mortgage bond trading department. He then went on to work for Citigroup and later spent a decade trading options at a hedge fund called Peahi Capital.

He is one of the editors at Banyan Hill Publishing where he publishes Crypto Profit Trader and Automatic Fortunes. He uses the former to convey actionable crypto investment ideas to his audience.

Automatic Fortunes is an advisory service run by Ian King that is designed to help you make money in the stock market – the description is as simple as that.

In the context of this presentation, it appears Ian will be focusing on tech stocks. These are companies involved in AI, big data, 5G, and IoT, just to mention a few.

When you become a member of Automatic Fortunes, you will receive:

In addition to those benefits, there are a couple of reports Ian will send over to you for free as soon as you subscribe via this presentation. They are:

How much do you pay to join Automatic Fortunes?

The annual subscription fee is $97

Yes, it does. You can cancel your membership for a full refund any time within 365 years of joining.

Closing Remarks on The End of the Dow

The End of the Dow is a presentation by Ian King during which he outlines his investment strategy. The title is a bit misleading because the pitch isn’t about the Dow Jones Industrial Average “coming to an end.”

Instead, it is about what Ian King believes to be an impending tech boom that will catapult certain companies in the stock market to new heights. These disruptors will do so well that they will replace some of the companies in the Dow – and this is probably why he chose that title for the presentation.

Amid those disruptors, he has singled out Square Inc., a company that has disrupted the digital payment processing space and that has seen its revenues grow consistently over the past five years. Ian is right about it being a successful company (at least in the past few years) and makes a solid argument about it being a good investment in the long term. But before you invest in it, do more research to ensure that it is the right investment for you.