Jon Markman believes that he has found the sweet spot in the market. A group of stocks he calls The Elite 35.

He says that most of the stocks that professionals in the media talk about are not worth investing in and that the best way to go about it is to follow his guidance.

In this article, I have distilled his presentation into the most pertinent points you should pay attention to as you decide whether his investment approach is worth your while.

The Elite 35 is a presentation by Jon Markman that he released to promote an advisory service he edits at Weiss Ratings called Power Elite. 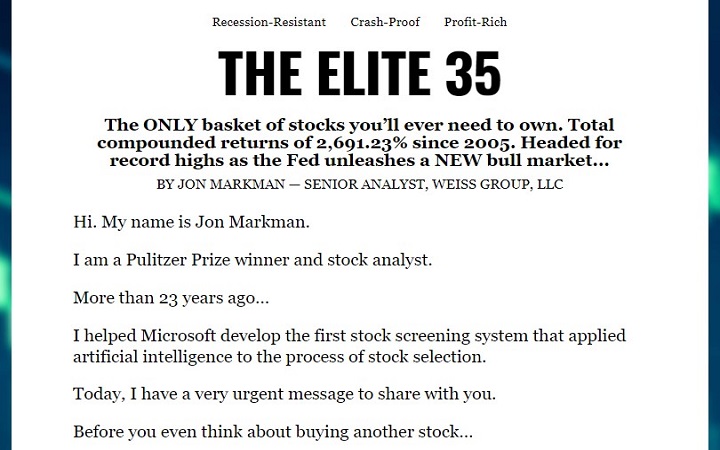 His key premise is that out of the numerous public companies in the stock exchange, only a handful are worth investing in. He regards a small portion of (the handful) recession-resistant and cash-proof. Here is an excerpt from the presentation:

“You see, of the roughly 3,700 publicly-traded companies on the stock exchange…

Only about 70 are worth your time and attention.

Only about half of those — just the 35 stocks on this list — are worth putting in your portfolio now.

They include the most recession-resistant and crash-proof stocks with the highest profit potential at this time.

Only a small handful of insiders know about them.

But I’ve made special arrangements to get this document into your hands today.”

We will get to the document he is talking about there in a bit; before that, what we learn is that he has identified 35 stocks that he wants you to consider for investment. That’s the basis of “The Elite 35.”

He goes a step further and says that he tracked these stocks as far back as 2005 and found that a portfolio comprising them would have earned a compounded return of 2,691.23%. Of course, these are the results of a back-test and they don’t guarantee returns in the future, but this serves as further proof, according to Markman, that they are solid investments.

As investment gurus like Shah Gilani and EB Tucker have done in the past, he says that Wall Street “insiders” have been pulling a fast one on retail investors. He says that hedge funds and other insiders run a pump and dump scheme where they find undervalued stocks and buy them up on the cheap. They then tip off analysts who write glowing reports on them rating them as “strong buys.” Mainstream financial media also jumps on the bandwagon and touts them to retail investors causing many small investors to bite. As prices reach full valuation, hedge funds and brokers exit these stocks leaving the small investors holding overvalued stocks.

He says that owning mutual funds and ETFs makes things even worse because you own a large number of these “sucker stocks.”

His solution to this is to find a group of stocks that do well and invest in them rather than passively invest in what he considers overhyped stocks or “baskets of sucker stocks.”

Markman says that he and his team built an algorithm to look for companies that would do well. They decided on 10 conditions that the companies on the list would have to meet. He frames it as follows in his presentation…

Specifically, we built the algorithm to look for companies that could answer “yes” to these 10 questions:

Is the company currently making money?

Has it made a profit in at least 7 of the last 8 years?

Does it have plenty of cash on hand?

Does it have the right level of debt for its size?

Is its industry growing?

Have the shareholders gotten a good return on their money?

Has the company created any new products or services recently that might increase the value of its stock?

Has it recently revised its earnings estimates upward?

Are some investors selling the stock for reasons that have nothing to do with the inherent quality of the company?

Is the stock’s price rising … but still reasonably priced?

He says that after running their algorithm, it returned some surprising results. For example, they found that many high-flying tech stocks, famous blue chips, and “darlings of the moment” do not cut it. Instead, they found “the 70 strangest stocks you’ll ever fall in love with.”

He says that although they are boring and many professionals ignore them, they make money, pay dividends, and their stock prices go up year after year in good markets and bad.

He describes them as follows in his pitch:

What do The Power Elite stocks have in common?

They’re in industries that may not be glamorous…

But they’re steady and reliable moneymakers.

They are often in niche markets, and they’ve gotten very good at their niche.

Their products tend to be: a) necessary; b) addictive; or c) the best in their industry.

So, they can charge higher prices than the competition.

They are mid- to large-cap corporations…

But they run their business as if they were small, private companies:

They have great cash flow and minimal debt.

They keep tight control of their costs.

One of the ways they do that is with cutting-edge technology.

No, they are not all technology companies.

Some of the stocks he mentions in glowing terms in the presentation that are probably on the list include:

Who is Jon Markman?

He has had a career spanning three decades during which he has been a journalist as well as an analyst. He has a passion for quantitative analysis and considers himself a pioneer in developing stock screening software.

He is the author of bestselling books, including New Day Trader’s Advantage, Swing Trading, Online Investing, and Reminiscences of a Stock Operator: Annotated Edition.

He was a news editor with the Los Angeles Times staff that won Pulitzer prizes for reporting in 1992 for the Rodney King riots and in 1994 for the Northridge earthquake.

He is a graduate of Duke University and the Columbia University Graduate School of Journalism.

What is Power Elite? (The Monthly Subscription)

As I mentioned at the start, the presentation was meant to pitch an investment research service Jon Markman runs at Weiss Ratings called Power Elite. 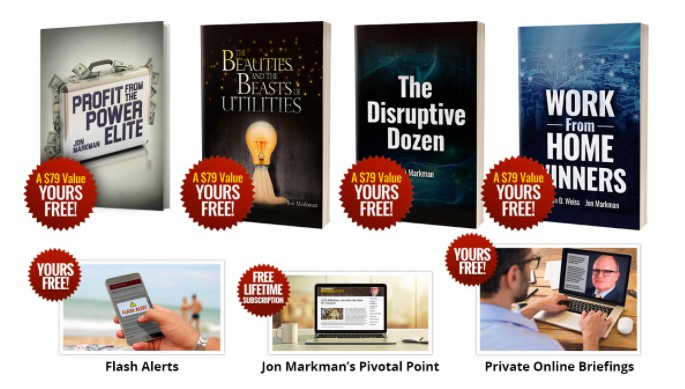 He says that it is built on a computer model running the algorithm that sifts through the stock market. He and his developers have programmed it to determine which stocks to buy and when to buy and sell.

When you sign up for Power Elite, you get:

How much do you pay to join The Power Elite?

The service has a 365-day money-back guarantee.

Closing Remarks on The Elite 35

Jon Markman believes that a majority of the stocks trading in the market are not worth your time. He says that Wall Street knows this but the average retail investor doesn’t and that means that the small guy is being taken for a ride or, as he puts it, “gets played for a sucker.” Therefore, the rich take money from the ordinary folks with them never knowing it.

To combat this, he has created a new trading service based on an algorithm that sifts through the market finding the best stocks. He put these together into what he calls “The Elite 35.” Of course, to find out their names, you have to sign up for his newsletter that goes by the name Power Elite.

Jon’s approach is not novel as we’ve seen other gurus create portfolios that they say have the best chances of beating the market. Perhaps the distinction here is the metrics he uses for picking his stocks because from the examples he gives, they are not the usual newsletter fodder.