One of the financial gurus at Casey Research called Dave Forest sat with his host, John Voth, in a webinar dabbed The Dollar Deception.

Dave Forest tells us he believes that over the last two years, America’s elites have used crisis after crisis to transform the financial system. That they’ve used these crises to distract and blindside Americans. In the pitch, he explains that he can see through the propaganda and that there is a final phase that can enable you to multiply your nest egg.

In this piece, we delve into what the two were talking about as we learn more about Dave’s advisory service.

What is The Dollar Deception?

As I mentioned in the preamble, Dave Forest believes that Americans have been distracted by disaster after disaster over the last two years.

This includes things like health crises, riots, election controversies, shortages, and even inflation. 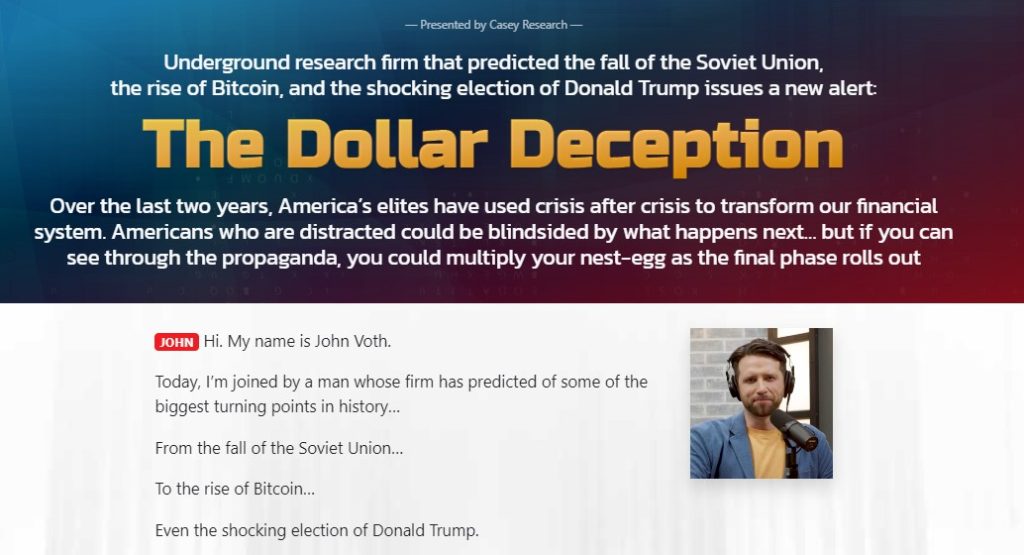 These things were used by America’s elite to enact a dangerous scheme to take the cash out of ordinary people’s wallets and replace it with a new currency. Dave explains that this would represent the biggest change to the dollar since 1971 when Nixon took the dollar off the gold standard.

He says that this plan was started by Nancy Pelosi and supported by Bill Gates, the United Nations, the IMF, and the Federal Reserve.

Dave Forest states that while most people thought businesses that banned cash were just looking out for the health of their customers, this was ‘phase one of the plan to launch a new currency. He says that this would be a beta test for what would be the biggest change to the financial system since 1971.

Dave Forest is talking about the introduction of a digital dollar. Lawmakers have already introduced a bill to allow the Treasury to create an electronic dollar, which would be a virtual representation of a US dollar, which would allow people to pay using tokens on their phones.

We’ve seen other investment analysts like Nick Giambruno (Reset the US Dollar) and Jeff Brown (The Great Reset) talk about this too.

He claims that patents on new technologies from Microsoft and Visa – the infrastructure for this new ‘money plan’ were phase two and phase three was an executive order from the White House, which outlined plans for the final pieces of the puzzle to be put into place as soon as September 9th, 2022.

Dave warns that introducing a digital dollar will bring changes to the financial system and this would mean retirement savings and investments of millions of Americans are at risk.

He says that the time to prepare for such a change is now because if you are proactive beforehand, and take the steps he’ll outline for you when you subscribe to his newsletter, Strategic Investor, you can protect yourself.

He adds that besides protecting yourself, you can even earn 1,000% or more even if the Fed overhauls the system.

To help with this, Dave has written special reports outlining the steps you ought to take to avert disaster. The first one is:

Bitcoin: Why Every American Should Own at Least $100 of the Hardest Money the World Has Ever Known

In this report, he urges you to invest in Bitcoin, which he thinks is a good store of value.

In this report, he talks about the importance of storing your wealth in form of hard assets because they perform well during periods of enormous volatility and runaway inflation.

So, he thinks that they are a great way to protect yourself from what he calls “the final phase” and he claims to have found five ‘hard’ assets with a history of making investors a lot of money.

The first hard asset he is recommending gives you exposure to one of the world’s largest real estate trusts – a firm in an industry expected to see 120-fold growth, even if the rest of the market falls apart.

The second hard asset is a gold play – but he says that it is not the kind of gold play most folks are familiar with because it has nothing to do with mining, gold bullion, or anything like that. He says that it is a firm that uses a low-risk, high-upside strategy with a history of turning $100 into $32,000 and it can be traded in a standard brokerage account.

The other three assets include “a surprising asset almost every American has in their own attic or basement – with the potential for tens of thousands of dollars in profit” and what he considers his #1 ‘non-stock’ asset to protect you from runaway inflation.

Dave Forest works for Casey Research as part of the editorial team. He is a professional geologist, venture capitalist, entrepreneur, and financier with over 25 years of experience.

In his career, he’s been to more than 35 countries whereby he’s visited all kinds of places, including the heights of the Andes, the rebel-held jungles of Southeast Asia, the exotic land of Mongolia, and the Russian tundra, Colombia, Peru, and Uzbekistan.

He helped develop a 10-million-ounce gold deposit in Colombia and was the first to be granted a modern exploration license in the emerging economy of Myanmar.

Mr. Forest joined Casey Research in 2004. He focuses on bringing extensive expertise and a knack for finding big profit opportunities to subscribers around the world. He is the editor of Strategic Investor, Strategic Trader, and The Super Spike Advisory.

Strategic Investor is an investment research service offered by Dave Forest and published by Casey Research.

Besides those benefits, you also get an additional third report that outlines a strategy that fewer than 1 in 1,000 Americans has ever heard of that has nothing to do with cryptos, bonds, or options.

On top of that, he claims that the strategy has been used by Bezos, Buffett, and the world’s most widely-followed billionaires to multiply their gains by trading regular stocks.

The Strategic Investor has a 60-day money-back guarantee that allows you to review the service, and if you decide to cancel, you get to keep the special reports. 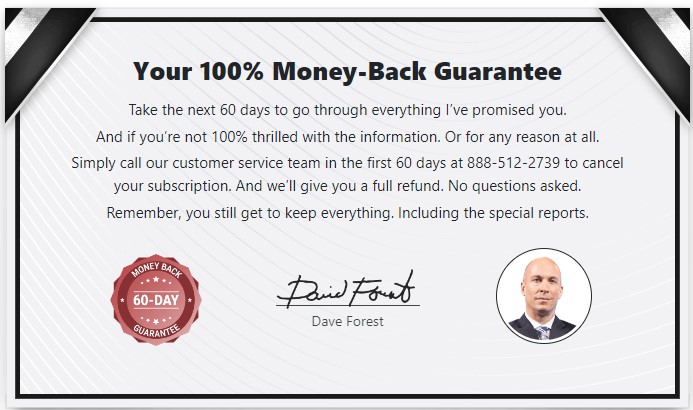 Closing Remarks on The Dollar Deception

Dave Forest claims that he saw it necessary to publish the presentation, “The Dollar Deception,” because he thinks that some Americans will struggle when the financial system gets altered by the introduction of the digital dollar.

He veers a bit into conspiracy theory mode when he starts talking about how the financial system is being manipulated by the elites at the expense of ordinary Americans.

He says that preparations are underway to launch a digital dollar because there’s an executive order from the White House that shows “it’s only a matter of time before cash is removed from the system and replaced by a ‘digital dollar.’”

He claims that his webinar is meant to show you what you need to do before cash is permanently replaced by a digital currency. And that includes a couple of investments that he says can multiply your nest egg by 10 times or more.

I should mention that although Dave claims that these investments have historically done well in situations such as the one we are going through, it is not a guarantee that they will pay off this time too. You can easily lose money by following his advice.