Jeff Brown has been urging people to invest in tech stocks for as long as I can remember. But over the past few weeks, he has been increasingly talking about cryptocurrencies and the Blockchain, and in his latest presentation, he talks about a phenomenon he calls “The Crypto Effect.”

He introduces it by saying,

“In this video, I reveal an opportunity to 32X your money… the NEW #1 tech investment of the decade…”

In this article, I give you an overview of what Jeff was talking about and reveal details regarding the newsletter he was touting in the pitch.

In Jeff Brown’s “The Crypto Effect” he claims that there is nothing that currently excites him more than the Blockchain. 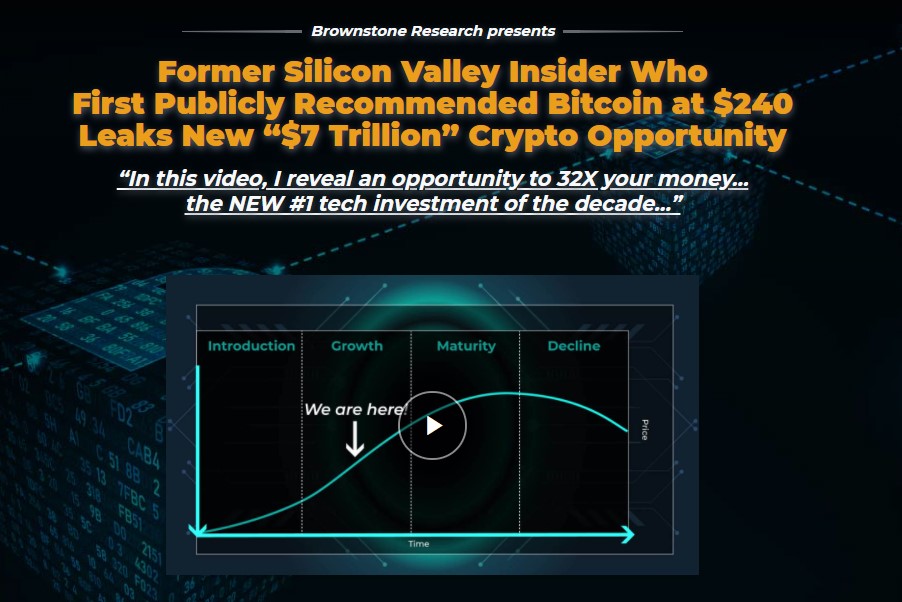 “…there is nothing I’m more excited about than the technology behind Bitcoin and other cryptocurrencies: blockchain technology.

On a percentage basis, it’s one of the biggest investments I’ve made in my life…”

Jeff Brown is certainly not the first investment analyst to talk about the Blockchain. In the recent past, I’ve covered presentations like Ian Dyer’s The Cryptoverse and Eric Wade’s Crypto Cash Summit

Circling back to Jeff Brown’s pitch, he claims that we are about to witness a major tipping point in Blockchain technology that could spark a revolution. He says

“…we’re just at the beginning of what I believe will be a major tipping point for blockchain technology.

It will radically change how you borrow and lend money, how you buy and sell stocks, bonds, commodities, real estate, and more. It will directly compete with — or even replace stockbrokers, commercial banks, investment banks, even central banks.

It’s so pervasive, so fundamental and so far-reaching that I can only describe it as the greatest investment opportunity of all time.”

In saying that, it appears Jeff Brown is talking about decentralized finance (De-Fi), a new phenomenon that is now being talked about by many investment experts.

Decentralized finance is a new financial system built on the blockchain that does not rely on central financial intermediaries like brokerages, exchanges, and banks. It does not use traditional financial instruments and instead relies on smart contracts. 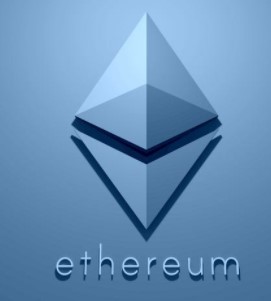 Ethereum is the most well-known platform for DeFi.

DeFi allows you to lend or borrow money from other people, speculate on price movements of assets using derivatives, trade cryptocurrencies, insure against risks, and earn interest on savings-like accounts.

Jeff Brown says that many companies are investing in the blockchain to take advantage of its properties that allow it to act as a financial ledger. He also says that the Department of Homeland Security has invested millions in a couple of small companies developing the technology.

When it comes to investing in this, he points to certain companies that will benefit from the mass adoption of the Blockchain. He says,

“There is an entire ecosystem of companies that benefit from Bitcoin’s existence. And many of them offer much bigger opportunities for you to make massive gains than most investors realize.

The reason these other companies are so exciting is that if you find the right one, their technology often has far greater applications than Bitcoin itself… so the profit potential is much greater.

Those of us in the ‘inner circle’ even have a name for this. We call it ‘The Crypto Effect.’”

As the crypto effect unfolds, he expects many of those companies to offer much bigger opportunities for you to earn a profit.

Even then, he claims that there are two opportunities that his research strongly suggests could benefit more from the Crypto Effect over the next 18 months.

He points out that as the technology improves, the costs are going down, and certain companies will grow much faster than normal. Investors who understand the powerful implications of exponential change can get rich faster.

Unfortunately, Jeff does not reveal more information about The Crypto Effect, and thus to learn more about it, you have to read the special investment guide he put together that shows you how to profit from it.

To get a copy of the report, you need to take a risk-free subscription to his research advisory, The Near Future Report.

In the report, he reveals everything you need to know about the crypto effect, including the list of companies that could take a big leap forward on the strength of these changes.

Jeff Brown is an investment analyst who writes about the technology sector. His most popular publication is The Bleeding Edge.

He publishes most of his work via Brownstone Research, an independent investment research firm he launched

He studied Aeronautical and Astronautical Engineering at Purdue University – the same school that produced Neil Armstrong and several other astronauts.

He has been active for the past 36 years, working as a corporate executive at the forefront of new tech advancements coming out of Silicon Valley. He has worked at companies, like Qualcomm and Juniper Networks.

Part of his job in those companies was overseeing global projects in foreign markets. Before he moved to Silicon Valley, he was based in Tokyo, Japan where he was the Head of Global Strategy and Development at a division of Qualcomm. At another point, he was also a Vice President at NXP Semiconductors, an Apple supplier responsible for delivering key components for the iPhone.

He has appeared dozens of times on TV interviews and hosted hundreds of lectures that he has been invited to give at private tech conferences and companies in more than 30 countries around the world.

The Near Future Report is an investment advisory service edited by Jeff Brown that he says brings you to his inner circle and makes you a fly on the wall as he uncovers the most exciting tech stories in and out of Silicon Valley. 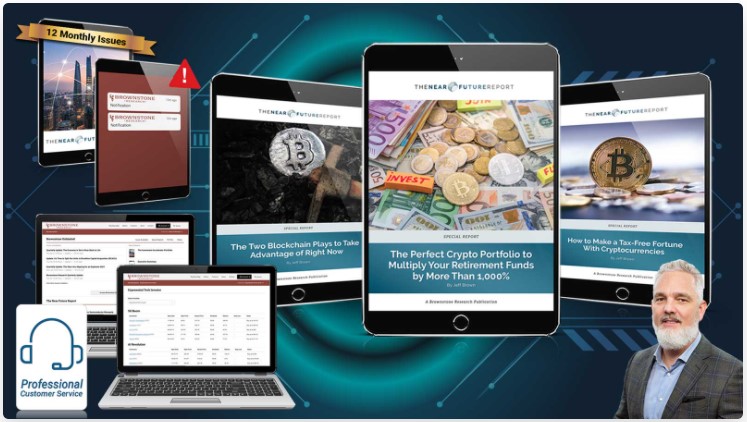 Jeff claims that by joining The Near Future Report, you are one step ahead of mainstream money in playing the tech trends he sees coming before anyone else.

When you join The Near Future Report, you get:

In addition to that, you also get the following bonus reports: 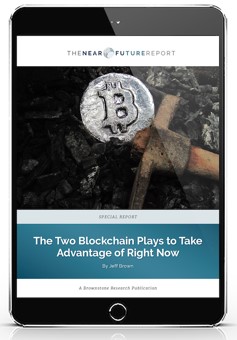 In this report, Jeff Brown covers everything you need to know about the crypto effect.

He reveals two companies that could see a huge reap forward owing to the Crypto Effect.

Special Report #2: The Perfect Crypto Portfolio to Multiply Your Funds By More Than 1,000% 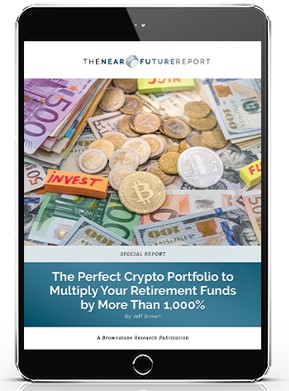 In this report, he writes about cryptocurrencies that you should consider investing in because they could multiply your money by more than 1,000%.

Special Report #3: How to Make A Tax-Free Fortune from Cryptocurrencies 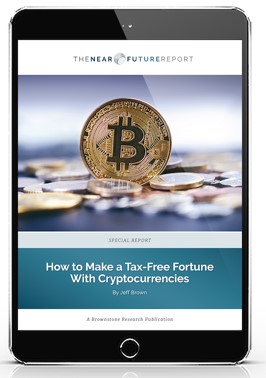 In this special report, Jeff talks about a new way for you to take advantage of the cryptocurrency trend so that your gains are 100% tax-free.

He reveals an IRS-sanctioned account that he claims allows you to invest in cryptocurrencies for your retirement account (IRA) or 401(k).

Special Report #4: Ten Cryptocurrencies to Avoid Like the Plague 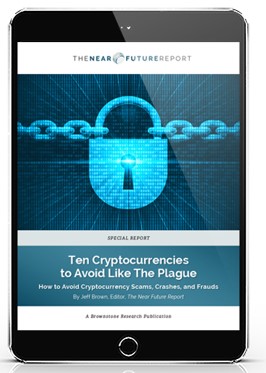 It is a special report about a new investment idea that he is excited about. He says that most people won’t expect it because it is unusual, although it could make you a lot of money.

He reveals ten assets that he thinks you should avoid in the crypto market.

How much is The Near Future Report?

In your first year, you pay $49 for an annual subscription.

The subscription policy then renews automatically every year for $129 per year. 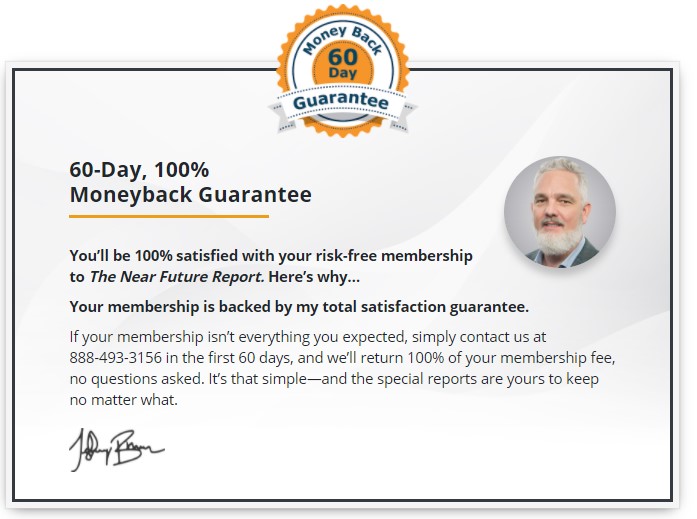 Jeff Brown claims that he learned about The Crypto Effect because he understands the technology in ways most others don’t. He says that with a simple glance, he can tell which companies are building real businesses with the potential to produce incredible returns and which ones are run by shoddy fly-by-night individuals looking for a quick cash grab.

By signing up for The Near Future Report, he says that he will help you to distinguish the two and help you make money in the process.

However, even as you follow the advice of Jeff Brown, be careful as you invest in blockchain stocks and cryptocurrencies because it comes with risks.