Teeka Tiwari has been promoting an event he calls “The Catch Up Coin HyperBoom” and on the landing page of the invite, he makes an ambitious claim that reads:

Let’s take a closer look at what Teeka Tiwari is expected to talk about at the highly anticipated event to learn more about the possibility of a hyper boom taking place as he claims it will.

Teeka Tiwari is one of the most vocal investment gurus when it comes to investing in cryptocurrencies. He is known for talking a good game when referring to his ability to navigate the crypto market. In his latest promotion for the event, he talks about the possibility of a “hyper boom” taking place in the market and the chances that six “catch up coins” will go up as a result. 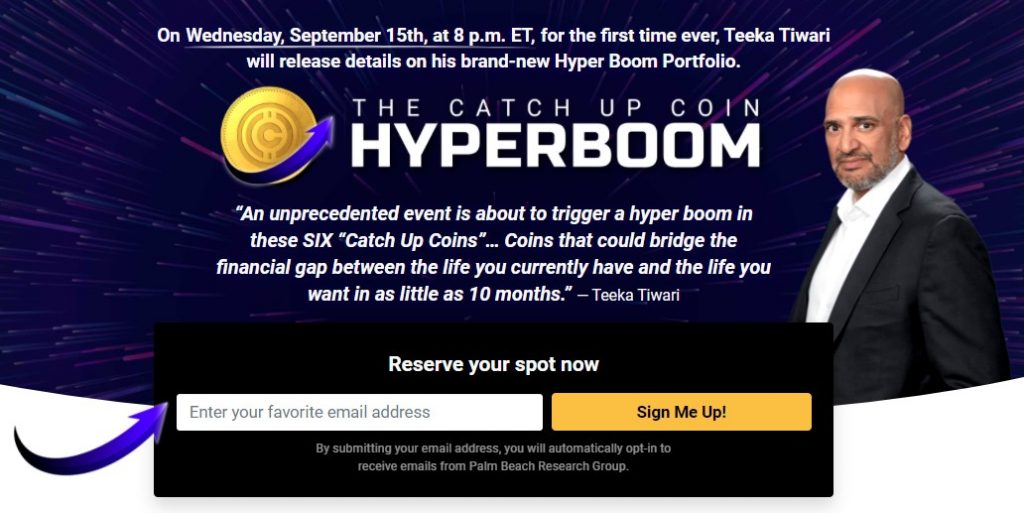 This comes on the back of similar “crypto events” by other gurus we’ve taken a look at over the past few weeks like “What Is Bitstocks?” by Nick Giambruno or Bryce Paul’s Digital Currency Summit.

Circling back to Teeka Tiwari’s Catch Up Coin Hyper Boom event, he claims that there are cryptocurrencies called “catch up coins” that enable investors to make a lot of money within a short period.

Teeka Tiwari says that now we are about to witness an “unprecedented event” in the crypto market that will trigger a hyper boom in catch-up coins thus sending them higher than we can imagine.

At the Catch Up Coin Hyper Boom event, Teeka Tiwari is expected to reveal:

Teeka claims that the Hyper Boom will only happen once and that it’s the only chance you have to shore up your retirement plans and your financial goals if you are looking for a way to secure your financial freedom.

What are Catch Up Coins?

Catch up Coins is a term Teeka formulated to refer to altcoins. There is a wide range of uses for altcoins but the bottom line is that the term is used to refer to all cryptocurrencies besides Bitcoin. For example, Litecoin and Ethereum are altcoins.

Therefore catch-up coin is a term he uses to refer to the digital currencies he wants to recommend to his readers.

Unfortunately, he doesn’t give us clues as to the names or applications of those coins so it is hard to tell which ones he has chosen to add to his portfolio.

Each of those newsletters covers a separate topic ranging from options to stocks.

That being said, what he is most well-known for is his work in the cryptocurrency markets. Teeka Tiwari is a big proponent of investing in altcoins and blockchain stocks as previous events he has done like The Super Halving Summit and The Next Trillion Dollar Coin show.

Tiwari is a former hedge fund manager and Wall Street executive who was the youngest vice president in the history of now-defunct Shearson Lehman. He was a VP at the age of 20.

He made a fortune going short during the Asian Financial Crisis of 1998 but a miscalculation made him lose everything in three weeks. He says that he got greedy and hung on too long. After that turn of events, he rebuilt his wealth in the markets and went on to launch a hedge fund. He also learned to manage risk and make it his number one priority when evaluating investment opportunities, which now seems ironic considering he urges his followers to embrace volatility.

As he promotes The Catch Up Coin HyperBoom, Teeka Tiwari has been pounding the table telling people that it is still early days and we haven’t missed out on the cryptocurrency rally despite its 2020-21 run. He thinks that we are just seeing the beginning of the mass adoption of crypto and he predicts that we will see Bitcoin hit $500,000.

Is following Teeka Tiwari’s advice the “best investment you’ll ever make”? I think that is up for debate.

When Teeka Tiwari says that the hyper boom will only happen once and that you just have one shot to capitalize on the opportunity, I don’t think you should rush to follow his advice and throw all caution to the wind. His saying that is expected because he wants you to have a sense of urgency and follow his advice as fast as you can.

Why am I saying this? Investment gurus are great at marketing and they will say anything to inspire a positive reaction from you. I can bet that in a few weeks or months, he will have another “biggest opportunity in his career” that “you can’t afford to miss.” So, if you are willing to give his advice a try, rest easy and judge his advice on its merits.