The Bonner-Denning Letter is one of the flagship advisory services offered by Rogue Economics.

It focuses on fringe investment opportunities that are overlooked by the mainstream press but that have the potential to earn decent returns.

In a recent pitch, Tom Dyson (one of the contributors) promoted it promising a few special reports as well as a discount on the subscription fee. In this article, I will be covering that pitch as well as what the newsletter is all about.

What is The Bonner-Denning Letter?

The Bonner-Denning Letter is an investment newsletter that is published by Rogue Economics. It presents its subscribers with ideas that are not commonly put forth by mainstream media outlets.

The newsletter is run by Dan Denning and Bill Bonner (Tom Dyson is a contributor).

Recently, Tom Dyson released a presentation in which he promotes the Bonner-Denning Letter. In the video, he talks about the economy as he sees it running and how he expects the future to pan out. 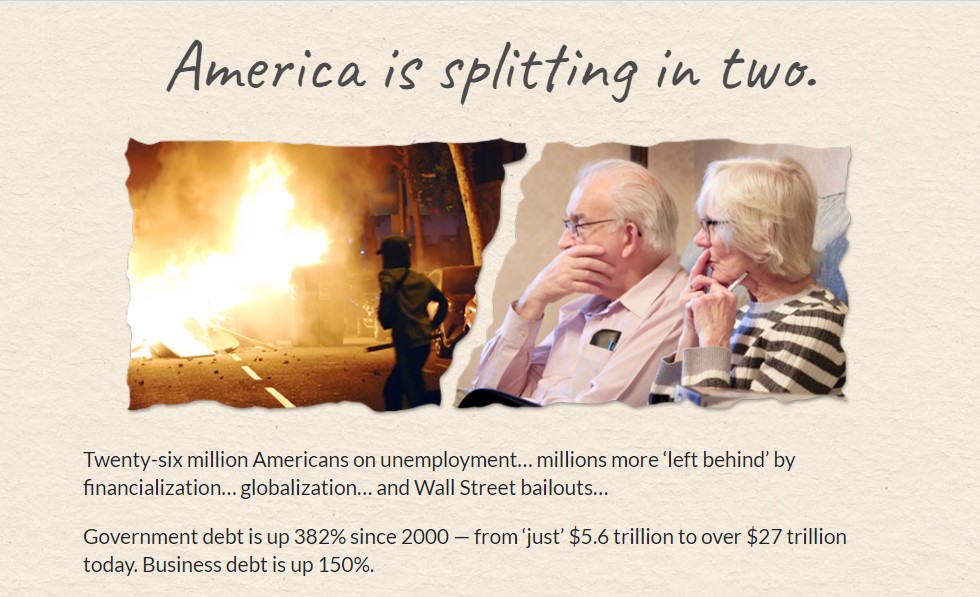 He starts the discussion by presenting the notion of a two-tier financial system. He says that the financial system as it is right now is divided into two tiers and that it is likely to collapse. This excerpt pretty much sums up his outlook:

“This two-tiered financial system is fundamentally unfair. But it’s also inherently unstable… and ultimately, it will break down completely.”

The gist of it is that the financial system is divided into two groups: a top 10% that controls 90% of the economy (the elites) and a bottom 90% that takes up the rest of the economy. He says that this setup is skewed in favor of the top-tier group.

Then he gets to the role of the Federal Reserve in all this and the issue of printing money from thin air comes up. He acknowledges that while this practice, technically known as Quantitative Easing, is a useful lever in keeping the economy afloat when overused, it can cause problems. And a quote from the presentation sums this up:

“The current world financial system — in which central banks try to hold everything together by pumping in more and more money — is now in its final stage. It is unravelling…”

What he means by that is that we are about to reach a point where it becomes ineffective if not dangerous.

His solution is to invest in gold:

“But after I got my life back together, I discovered that gold isn’t an ‘investment’ at all. It is something altogether different. I call it ‘truth in money.’

Most of the time, you don’t need it. As Warren Buffett says, it is useless. It generates no income. It creates no wealth.

But there are other times — special times, that come only once in a lifetime, or less — when it is the secret to not only protecting your wealth but to making an almost infinite amount of money — a huge fortune, in fact.

This is one of those times. (And by the way, Warren Buffett just made the first gold purchase of his career).”

One of the reasons he thinks gold will do well is that we are about to witness a “debt trap” and gold will be a safe investment that will retain its value through all of it.

This reminds me of a presentation by Martin Weiss aptly named “The Next Phase of the Collapse Of 2021” where he echoed Tom’s sentiments.

Another key takeaway from the presentation is something Tom calls “anticipating the Fed.”

Here he is explaining it:

“The Fed is the biggest single player — by far — in the financial markets. If you knew what the Fed was going to do…you could be almost guaranteed to make money. That’s how speculators made billions of dollars — safely — by anticipating the Fed’s next move.”

He also points out that the Fed is likely to create an investment opportunity as it implements monetary policy:

“And here is where I come to the most important thing in this presentation: We DO know what the Fed will do. We know what it has to do. And we know also where it will lead.

First, it will cause the Biggest Financial Wipeout Americans have ever seen — a sudden, unexpected spike in inflation.

Second, it will bring ONE OF THE GREATEST INVESTMENT OPPORTUNITIES ever. One that will protect you from the wipeout. And also make you a lot of money.”

He wrote a report about this phenomenon in which he explains the link between the Fed’s actions and gold prices. It is titled How to Front-Run the Fed and in it, he explains how he expects the price of gold to go up significantly, possibly reaching $10,000 per ounce by the time the crisis is over.

You get the report if you sign up for the Bonner-Denning Letter.

Who are Tom Dyson, Dan Denning, and Bill Bonner?

The three of them are the editors at Rogue Economics, a boutique investment research firm.

Tom Dyson is the editor of Tom’s Portfolio and Postcards from the Fringe. He is a former London banker and money manager. He travels the world with his family and writes about how he views the markets and the economy. He is well known for his contrarian ideas and his affinity for gold.

Dan Denning is a co-editor of The Bonner-Denning Letter. The service provides its readers with contrarian ideas about investing. Dan is the founder of Southbank Investment Research, a British financial publishing firm. He believes in a free market, personal liberty, and small government.

Bill Bonner is best known as the founder of The Agora, which is the largest independent research network in the world. He has launched other businesses, including Bonner & Partners and Rogue Economics. He is an author of best-selling books in addition to sharing his insights through the newsletters he runs.

What do you get when you join The Bonner-Denning Letter?

As I already mentioned, they send you a special report called How to Front-Run the Fed when you sign up for the newsletter. But there are other special reports you get for subscribing. They are:

How much do you pay to join The Bonner-Denning Letter?

If you join via the presentation, you only have to pay $49, which is down from the regular retail price of $199.

Yes, it does. You have 60 days to try it out, during which you can cancel your membership for a full refund.

Closing Remarks on The Bonner-Denning Letter

Therefore, the Fed’s response is to print more money (he calls it “fake money”) and set low-interest rates to stimulate the economy and bail the government and companies out. This, he believes, will carry on because it will suit political interests.

Then he says that this will cause inflation and possibly social unrest and recommends that you invest in gold to survive this because he expects its value to go up as the dollar plummets.

This presentation is typical of what investment gurus do to create urgency by positioning themselves as the beacon of hope during dire times. There may be some truth to it but you get the impression that some of the stuff in there is exaggerated.

About The Bonner-Denning Letter, it is not a stock-picking advisory service. Rather, the editors give their opinion on the market and leave it up to you to decide how to navigate it.