Wondering what Teeka Tiwari’s Bitcoin Boost is all about?

Teeka Tiwari is known for urging people to invest in cryptocurrencies and blockchain stocks and in his latest presentation called The Bitcoin Boost, he alleges that there is still more money to be made even with the recent crypto boom appearing to have lost momentum.

Teeka Tiwari believes that if you have missed out on the recent Bitcoin Boom, you are not too late because he has found a way you can make up to $72,637 more per Bitcoin.

In this piece, we will be taking a closer look at the presentation to find out what Teeka Tiwari is proposing you invest in to take advantage of the cryptocurrency boom.

The Bitcoin Rally of 2020-21 has been all that investment analysts have been talking about over the past few months. In a year when the stock market did relatively well, Bitcoin was still a standout performer and in February 2021, it even had a market capitalization of $1 trillion, although it couldn’t hold on to it for long.

Newsletter gurus have certainly been talking about it as well and I have reviewed numerous presentations about the cryptocurrency frenzy, including The Crypto Effect by Jeff Brown, Eric Wade’s Crypto Cash Summit, and Matt McCall’s 2021 Crypto Millionaire Forecast. 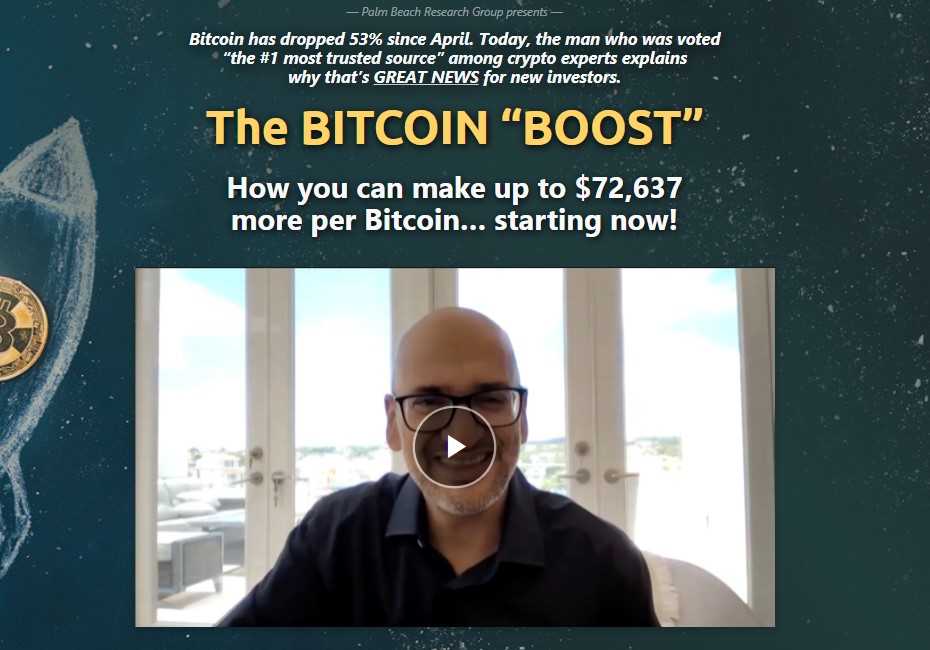 Although it might feel a bit late to get in on the Bitcoin boom, Teeka Tiwari says that there is a way you can squeeze even more money from every Bitcoin you own. He calls it “the biggest breakthrough in crypto in the last decade.”

First, Teeka believes that Bitcoin is here to stay because even major players like Goldman Sachs, Morgan Stanley, and JPMorgan are involved in it.

Teeka Tiwari says that this new way of investing in Bitcoin has nothing to do with a new Bitcoin ETF or even blockchain stocks.

He says that more than 400,000 people have already started investing in this new way of owning Bitcoin, including Peter Thiel, Pension Funds, Fidelity.

And for every Bitcoin you buy, he says that you stand to gain up to $72,637. He claims that you will make money even if Bitcoin’s price stays flat.

How does this work?

Well, first, Teeka Tiwari takes us back to when he was talking about the Office of the Comptroller of the Currency (OCC), a little-known branch of the Treasury that supervises national banks, releasing a document called 1170.

According to him, this document clarified that traditional banks are allowed to hold and secure cryptocurrency assets for clients and this meant that big players could get involved because there were clear regulations (established by the document).

He attributes the entry of institutional players into crypto to this document by the OCC. These are institutions that previously distanced themselves from investing in crypto assets.

With big money entering the market, Teeka Tiwari believes that this explains why the prices of digital assets like Bitcoin have gone up in the past year. And he expects this to go on, citing analysts who have predicted that Bitcoin could rise even higher. He says,

“Some experts, like Bloomberg, ARK Investment CEO Cathie Wood, and former Goldman Sachs hedge fund manager Raoul Pal, believe bitcoin is now set to rise to $400,000… $500,000… even $1 million a coin is a possibility in the near future…”

But even as this happens, he prefers that you invest in what he calls “The Bitcoin Boost.”

What exactly is “The Bitcoin Boost”?

According to Tiwari, the Bitcoin “Boost” is a new type of investment account he wants you to consider going for. He says,

“The Bitcoin “Boost” is just a new type of investment account…

And it’s designed 100% for crypto assets.

In other words: The Bitcoin “Boost” lets you EARN INTEREST on your bitcoin…

But here’s the key part:

That interest is paid, not in cash, but IN MORE BITCOIN.”

It allows you to earn interest on your money and he believes it is better than the conventional savings account.

“unlike an average savings account that pays just a paltry 0.04% per year…

It has to do with the Blockchain, the technology that underpins Bitcoin. Teeka says that with Blockchain, you can store, send, and track money and value without relying on third parties.

He is referring, of course, to decentralized finance (De-Fi), a new financial system based on the blockchain that enables investors to borrow, lend, and even operate a savings account without involving a third party like a bank.

Teeka Tiwari says that there is a company that offers this new investment account and it is already being backed by at least seven billionaires, including Peter Thiel and executives from the Department of Defense, Microsoft, and few other banks.

The fact that these people are investing in the company gave Teeka Tiwari the confidence to consider it a legitimate investment. He even had his team call the CEO of the company and they grilled him for hours to learn more about it.

After doing his research and feeling satisfied with everything he had learned about the company, he says that he invested a quarter-million dollars in the venture.

He says that if you wish to follow his example and invest in “The Bitcoin Boost,” you should read a special report he wrote called The Bitcoin “Boost”: How to Earn Up to $72,637 More Per Bitcoin.

In the report, he reveals how “Bitcoin Boost” works, the financial institution that offers the “boost,” and step-by-step instructions on how to set up an account.

It also includes details regarding something he calls “super boost,” which is a speculative way that you can earn up to 223% more on your investment than the Bitcoin “boost.”

Teeka Tiwari is an investment analyst who claims to be one of the most trusted voices in crypto. He says that he calls himself a trusted voice in crypto because it was the verdict that was reached following a poll of over 130,000 independent analysts.

He has been writing a lot about cryptocurrencies ever since he allegedly recommended Bitcoin in 2016 through one of his financial newsletters. He claims to have recommended Dogecoin too before it went on to climb up as high as 290,060% and Ethereum before it went up 46,219%.

Teeka Tiwari has hosted many presentations touting ways of investing in cryptocurrencies and the Blockchain. Some notable ones include The Super Halving Summit, Next Trillion Dollar Coin and 5 Coins to $5 Million.

Teeka Tiwari is a former hedge fund manager and Wall Street executive. He was the youngest vice president of Shearson Lehman at the age of 20.

The Palm Beach Letter is a research service published by The Palm Beach Research Group and overseen by Teeka Tiwari that is read by over 165,000 people.

Every month, Teeka is on a mission to show people how to achieve financial freedom through low-risk recommendations with high upside potential.

Teeka Tiwari says that The Palm Beach Letter portfolio has performed 14 times better than the S&P 500 since he took over in 2016.

To find those investment opportunities, he claims to have spent close to 200 days on the road each year (before the pandemic) and flown hundreds of thousands of miles to meet with the biggest and most successful players in crypto.

Here is what you get when you sign up for the Palm Beach Letter:

The Investment of the Decade: Three Must-Own Stocks that Will Power Blockchain’s $30 Trillion Revolution

In this report, he reveals his favorite blockchain stocks to invest in right now. 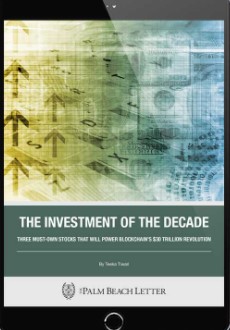 The first one is set to benefit from the new financial blockchain products that will hit the market, including ETFs, Options, and Futures. It will take a cut from every transaction involving these assets on a unique exchange.

The second blockchain stock is a “hardware play.” Tiwari compares it to Cisco, which rose 67,491% in the 90s during the Internet boom because it provides the hardware needed to power the blockchain boom.

The third blockchain stock is a payment company that he believes could become the “next VISA” because it was the first to add blockchain to its payment system. Its revenue is up 11 fold since 2014.

In this report, Teeka Tiwari reveals his next three big winning speculations in the blockchain space. They are “penny blockchain” plays that he says have the potential to go up to 100X or more.

It is a comprehensive crypto training course that Teeka Tiwari says is the perfect primer for beginners. He has compiled a series of videos that he claims you can watch to learn more about the crypto market.

The lessons teach you how to buy and trade cryptos even if you’ve never done it before.

How much is The Palm Beach Letter?

An annual subscription to The Palm Beach Letter costs $49, down from the usual $199.

Note that it renews every year at $129 (plus applicable taxes) per year after your first year. 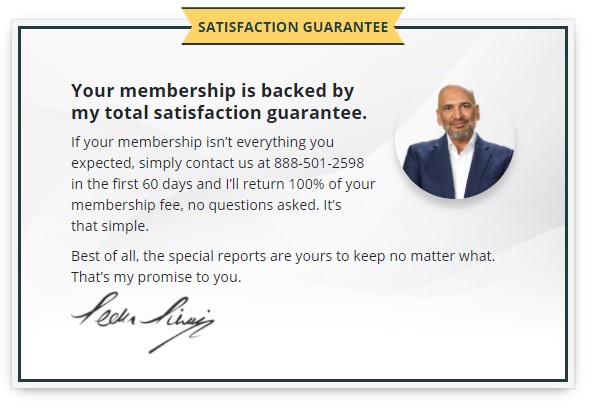 Although Teeka Tiwari believes that Bitcoin may soar to $500,000 per coin, he has found an investment that he is calling the Bitcoin “Boost” that he thinks could perform better. He says that it is a special type of account that is being offered by one relatively unknown company.

More importantly, he believes that the returns you will get from investing in the Bitcoin “Boost” will far-eclipse what you get from Bitcoin. And these returns will come even if the price of Bitcoin stays flat.

Although I am not sure of it, I think he is talking about some kind of investment that involves the Decentralized Finance phenomenon. It has been getting a lot of attention from investment analysts because they believe that it is the next investment frontier in the cryptocurrency market.

If you will consider what Teeka Tiwari is proposing, I suggest you do your research first before you get involved in any investment. This is all new and it is happening quickly, so it can get a little confusing. Besides, you should take what Teeka Tiwari is saying with a grain of salt because he is not offering personal financial advice.