Looking for more info on “The Biggest Tech Rollout in History” stock?

Michael A Robinson just released a video about a Tiny Device that Could Turbocharge the Economy.

He claims that we are about to witness a Touchless Technology Revolution that Could Unleash a 1,768% Sales Explosion for the Company behind the tiny device and he wants to prepare you to make money off of it.

Therefore, in this article, I will walk you through the main talking points of the presentation and take a closer look at the newsletter he wants you to join. By the end, you will be in a better position to decide what to make of it.

What is the Tiny Device That Could Turbocharge the Economy?

Mike Ward and Michael A Robinson recently released a video presentation where the conversation centered on what they were referring to as the “Touchless Technology Revolution.”

In what they termed as “The Biggest Tech Rollout in History,” they went through several “touchless applications” that they expect to disrupt the technology and biotechnology landscape and create good investment opportunities for savvy investors. 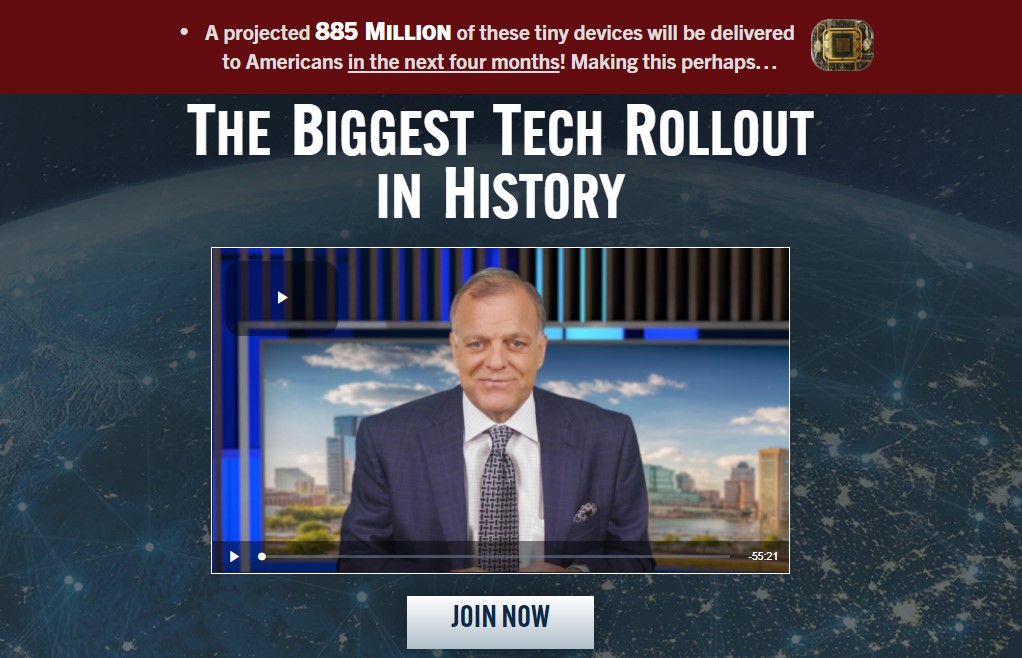 This reminds me of a recent presentation with the title The Great American Tech Reset by Chris Dehaemer I reviewed about a touchless payment revolution that will become prominent for the next ten years.

Going back to Michae’s presentation, the revolution will be based on a tiny self-powering transmitter that will be implanted in billions of devices with various applications. They use this image of it during the presentation: 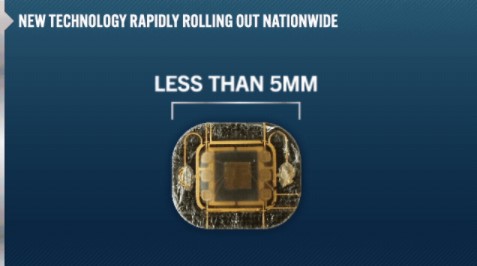 Mike Ward describes it as follows:

“It’s one of the smallest, most powerful transmitters in the world.

And unlike any other transmitter… it needs no battery. Instead, it’s powered by harvesting and storing energy from the devices it talks to.

And the patents on this are already locked and loaded.

Again, this little device is projected to fuel over $20 trillion in growth in the next couple of years.”

This transmitter will be used in a variety of ways:

It will be embedded in cards that will allow consumers to pay for goods without having to touch a button. Here is how Michael describes it:

“Let’s say you want to pay for a cup of coffee.

You bring the card up next to the card reader.

The reader sends an electromagnetic signal to the card.

And that’s where things get really unique. This chip turns your card into a self-powered computer that can send information wirelessly… something that’s never been done in an application like this before.

Then the chip in your card encrypts your payment details with a unique, one-time code and sends it to the reader for approval.”

This couldn’t come at a better time because businesses are switching to touchless payments due to the coronavirus pandemic.

It makes sense that people don’t want to handle money that has gone through the hands of strangers to minimize the risk of acquiring the virus and businesses are aware of that.

Speaking of mass adoption, he says:

“885 million of these will be mailed to Americans likely by the end of the year, with full deployment expected within the next 12 months at the latest.”

In addition to microchips that are embedded in plastic payment cards, they have chips that will be implanted in smartwatches and phones to enable users to take advantage of touchless payment technology.

The wireless transmitter is also in Disney’s wristbands, called MagicBands.

“The chip inside the wristband is activated when you bring it up to the electronic ticket scanner.

It’s how you get in and out of the park…

Skip the lines to go on a ride…

Open your room at a Disney resort…

As well as pay for food, drinks, or anything you buy in any of their parks… without using money or carrying a ticket.

Disney dropped $1 billion to roll this out.”

Major hotel chains are installing smart locks embedded with those microchips and they will be used in a variety of ways:

“The world’s largest lock company, Assa Abloy, has already partnered with the firm we’re talking about today to upgrade hotels around the world with smart locks.

And it’s not just smart locks.

Open and close the window curtains…

Access the gym, spa, parking garage… you name it.”

It will also be used in hands-free digital car keys:

“When you walk up to your car, the touchless chip inside the phone alerts the chip in the car that the owner with the right key is approaching and automatically unlocks the doors.”

It will work even when your phone battery is empty and you don’t need an app because the microchip is embedded in the phone’s circuit.

Almost all major car makers in the world are working to make their keys touchless.

The company making the touchless microchip

And, as you’d expect, there is a company manufacturing those tiny devices and Robinson wants you to invest in it.

Besides the use cases I have highlighted so far, what else do we know about the mysterious company from Robinson’s clues?

All those clues point at NXP Semiconductors (NXPI).

From my research, I have found out that it fits the description because it makes the RF chips in Disney’s MagicBands and it has over 9,000 patents for its product.

He has written about it in a report titled The Touchless Payment Revolution: 885 Million Devices Rolling Out This Year.

In addition to that, he has also targeted four other companies that he wants his readers to invest in as part of the revolution. He has written the following reports providing details:

Who is Michael A Robinson?

Michael A Robinson is one of the investment gurus that work for Money Map Press. He also writes for Money Morning.

He has 36 years of experience as a tech and biotech investment analyst. As such, he knows his way around Silicon Valley where he has been working as a senior advisor and board member of several venture capital firms seeking to invest in promising startups.

He has an impressive Rolodex of CEOs, scientists, and other key players and this allows him to have his finger on the pulse of all major tech developments happening in the tech industry. Therefore, he knows which trends are worth investing in and which ones aren’t.

Robinson makes regular appearances on Fox Business and CNBC, where he shares insights touching on the state of the tech industry mentioning where investors need to turn to for investment insights.

What is the Nexus-9 Network?

Nexus-9 Network is a premium investment research service offered by Michael Robinson. It gives you access to information regarding the fastest-moving technological trends and the companies behind them.

Michael identifies disruptive companies and recommends them to his readers before the mainstream financial media and other uninformed investors catch wind of them.

He does that hoping that by the time other investors catch up, the demand for those stocks will surge leading to price increases that enable his readers to capture big returns.

Since he began offering the service, he claims to have shared over 200 recommendations that have earned double- and triple-digit gains over a few years.

If you want to get your hands on the five reports that have details on the five time-sensitive stock plays he was talking about during the summit, you need to subscribe to the Nexus-9 Network.

But that’s not all you will be getting when you join the research service. Here are the other entitlements:

Don’t forget that it renews automatically after 14 months at an annual rate of $1,950 per year. If you don’t intend to be a subscriber after the first period lapses, you need to contact customer care to cancel your membership. If you leave it be, they’ll assume you want to retain your membership and automatically deduct $1,950.

The Nexus-9 Network comes with a conditional money-back guarantee that reads as follows:

Well, then all they have to do is call up our VIP Services team, and they’ll refund you every single penny of the subscription cost.”

Money Map Press released the presentation to get people to subscribe to Nexus-9 Network (they even offer a discount to the first 450 people who join). The unique selling point was that membership will enable you to invest in disruptive technologies like the ones he describes before they reach mass adoption thus earning you outrageous gains.

Nevertheless, if you know anything about investing, things are never that straightforward. All investments carry risks and the best thing to do is invest money you will not mind losing.

If you intend to subscribe to Michael’s newsletter, don’t do it based on what Michael says in the video. For example, when Michael says that he has shared 200 double- and triple-digit gainers to his Nexus-9 Network subscribers, it sounds impressive but you can’t read much into that because it could be 200 out of 500 or 200 out of 1,000 and those two scenarios are very different.

That being said, don’t join without understanding the potential risks involved. But, if you trust Michael’s views and are willing to test them out, you will find this worthwhile.