Wondering what the Apple Super Cycle pitch from Jeff Brown is all about?

In his presentation, which bears the heading “We’re Up Against The Clock,” Jeff Brown says that he has an urgent private message regarding the iPhone 12 and to emphasize how time-sensitive it is, he sets the clock for 60 minutes implying that you have that long to act.

But what is the presentation really about?

I sat through the entire video to find that out and put together this review highlighting the key points that he put across. Keep reading to learn more about it.

What is The Apple Super Cycle? (Jeff Brown Pitch)

The Apple Super Cycle is a presentation that was published by Brownstone Research promoting Jeff Brown’s premium newsletter, the Exponential Tech Investor. 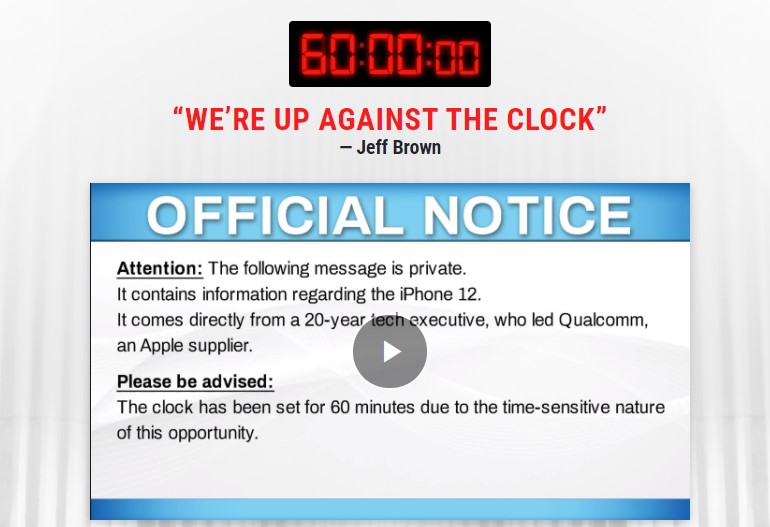 Jeff begins the pitch by telling us that Apple is set to announce “a breakthrough set to ignite a rare wealth-building event” that the elites refer to as “the super cycle.” He goes on to say that it is capable of generating enough money to fund your retirement in as little as 12 months.

We quickly learn that this all has to do with the iPhone 12 launch.

Note that at the time of releasing the teaser, Apple was yet to release the iPhone 12, which Jeff predicted would be 5G-enabled (it turned out to be true).

So, what is “the apple super cycle” that was ignited by the iPhone 12 release?

The apple super cycle refers to when Apple releases a new product or service like the iPod or the iPhone and it creates an upswing in the value of the company as well as the values of other companies that played a part in the production of the new product; usually suppliers.

Such companies are the ones that manufacture things like microchips and other components of Apple products not made in-house.

But in addition to suppliers, Jeff Brown says that there is another category of companies that usually sees gains when the super cycles happen. Explaining this with an example, he says:

“As the iPhone changed the world… these companies were the fastest to adapt.”

The companies building innovations for (and around) the ‘remote control’ Apple created… They were linked to the enormous wealth-generating event of the Super Cycle too.”

These are companies that make products and services for the new ecosystem. These include things like gaming tech, mobile apps, and other services that rely on the smartphone.

How to invest in Apple’s 5G Super Cycle

For starters, it is not about investing in Apple stock.

Instead, it is about investing in companies that are Apple suppliers or the others that make products and services for the Apple ecosystem.

This is not the first time Jeff is pointing this out because we saw it in his presentation about a small company that was making the RF filters used in 5G enabled devices.

But Jeff says that there is a caveat; you have to act as fast as you can to avoid missing out on the gains:

“And even within the Super Cycle, if you don’t invest at day 1 of these moves… you’ll only see a small fraction of these gains.”

To get in on the ground floor of the next super cycle, which will involve 5G, Jeff put together an urgent buy list of stocks that may benefit from the iPhone 12’s release.

He wrote a report about two of them called Inside the Super Cycle: 2 Tiny Stocks That Could Make You A Nest Egg. It contains details of two companies likely to record the biggest gains from the “super cycle.”

Jeff hints at the two stocks and after doing a bit of research, I deduced the name of one of the companies he was alluding to:

Jeff says that Apple invested $390 million into this company and its technology has been used in Apple’s devices before.

Billionaire Larry Fink has invested in it and the world’s top 4 asset firms have bought up shares.

He also brings up a quote by Jeff Williams, the Chief Operating Officer of Apple. Williams said “[the products of the company] will power some of the most sophisticated technology we’ve ever developed.”

On examining those hints, I could tell that the company Jeff is teasing here is Finisar (FNSR).

Finisar manufactures VCSEL chips for the iPhone that give the phone depth and proximity sensing features. These allow developers to create augmented reality apps.

When Jeff Williams mentioned the $390 million deal with Finisar in 2017, its stock surged.

Another company on the list manufactures MEMS chips that will be inside smartwatches, 5G base stations, and even the new iPhone. It went public recently.

I disappointingly couldn’t unveil its name because I couldn’t unravel the clues.

Jeff Brown is a tech investment analyst who is responsible for a few other presentations I have reviewed here before. They include Tech Lag Investment, Project Xi, and State of 5G Summit.

Before he started editing newsletters, Jeff had for 20 years been an executive at companies like Qualcomm and NXP Semiconductors, working both locally and abroad.

In addition to working in the finance industry, he also has taken up advisory roles such as one in DC whereby he offers advice to Congressmen and even takes meetings at the Pentagon.

In the realm of investment, Jeff focuses mainly on technology; he writes a popular technology-centric newsletter on investing called The Bleeding Edge.

What is Exponential Tech Investor? (The Newsletter)

Exponential Tech Investor is a newsletter headed up by Jeff Brown. Although he had been running other advisory services, he started it because he wanted to create a safe space to recommend small stocks without altering their prices artificially.

“If I gave the ticker symbols to my entire readership, it would drastically inflate the price – and the majority of folks would not be able to get in at my recommended price.”

If you sign up for it, you receive the following:

How much do you pay to join Exponential Tech Investor?

Jeff Brown is banking on Apple’s entry into the 5G conversation to stir things up and deliver massive returns. Throughout the presentation, he cites other major moves that it has made in the past that have resulted in stock surges of companies that benefited from it directly as suppliers and indirectly as providers of services within its ecosystem.

He released the presentation before the iPhone 12 was launched and since then, a few suppliers have seen their prices rise sharply, as would be expected. Finisar has not had as massive an upsurge as he envisioned.

That being said, if you are to take any lesson from this teaser is that when Apple is about to release a new product or service, it is worth finding out the names of companies that will benefit from such announcements.