Teeka Tiwari’s latest webinar (Crisis & Opportunity) is about “The Anomaly Window,” a significant market event that he will monitor closely.

Often talking about the cryptocurrency market, it appears Teeka Tiwari will be focusing on the stock market and reveal opportunities he thinks will be too big to miss.

Let’s look at what we can expect from Teeka Tiwari’s webinar.

What is Teeka Tiwari’s The Anomaly Window?

On the sign-up page for “The Anomaly Window” presentation, Teeka Tiwari’s publisher reveals that Teeka thinks we are “days away from a wild market event like no other” and that according to Nasdaq, this information is usually kept a secret by “insiders” and is considered one of “Wall Street’s best-kept secrets” 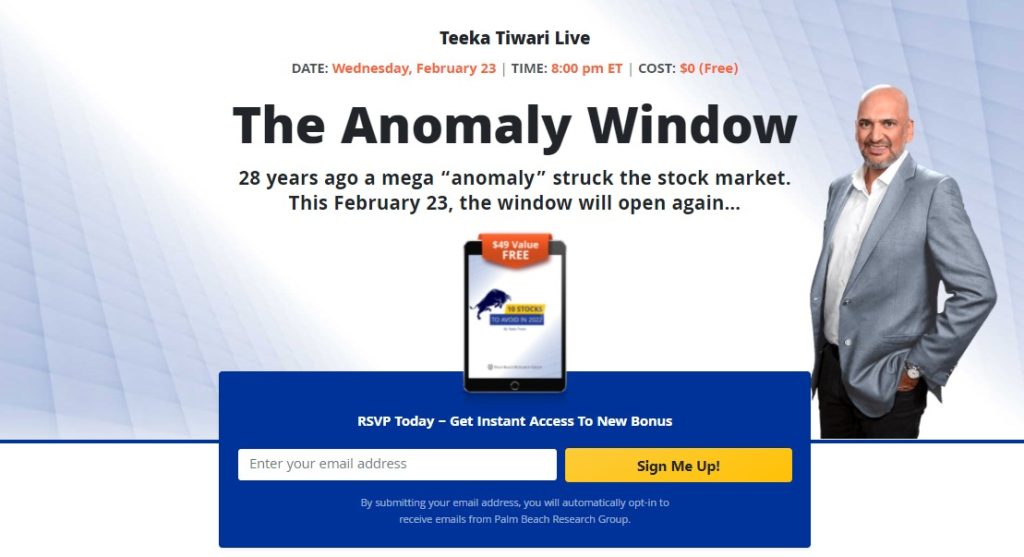 According to Teeka, the event he is talking about will be when “the impossible becomes possible” no matter where the market is moving. The last time it happened was 28 years ago.

He notes that when the anomaly takes place, even blue-chip stocks will allow you to make a lot of money. He has examples of various major companies making such gains during an anomaly, including:

Tiwari has allegedly shown readers how to take advantage of the situation before to make 21 years’ worth of stock market gains in 12 weeks. He’s predicting the anomaly to happen and as it does, he will be live streaming the Crisis & Opportunity webinar and hosting a Live Q&A session.

He will also reveal exact stocks that he says could do well, sharing a list of their names and ticker symbols.

So, what exactly is the market event he is talking about that happened 28 years ago and may happen again this year?

What is The Anomaly?

The most significant event that happened in the capital markets 28 years ago is the 1994 bond market crisis (or the Great Bond Massacre).

During the Great Bond Massacre, bond market prices dropped drastically across the developed world losing $1.5 trillion in market value. It is often regarded by bond investors as the worst financial event since 1927.

Some financial analysts believed that the fall in bond prices was caused by the Federal Reserve’s decision to increase interest rates by 25 basis points in February to mitigate inflation.

In the previous year, the bond market had been relatively bullish after many developed countries had gone through a recession a few years earlier (1987). Long-term interest rates had been nearing historic lows.

Then the Fed announced that it would raise interest rates and this along with a few other factors prompted a mass sell-off of bonds and debt funds.

This sounds familiar now because the bond market has been on a historic bull run, inflation is high, and some speculate the Federal Reserve may raise rates.

I don’t know whether the bond market collapse is the event Teeka is referring to but it is the most significant one that happened in 1994.

Now, what has he been saying in the lead-up to this event?

In a newsletter he sent out to subscribers of Palm Beach Daily to promote the webinar, he says that we are about to see another bull market in stocks. Here is an excerpt:

“But I believe we’re about to enter another bull market in stocks. And I believe it could last until 2028.

It all has to do with a rare phenomenon I call an Anomaly Window. And it has enormous implications for investors.

If you approach this Anomaly Window with the same investment playbook you’ve been using this year, you’ll continue to see your losses accumulate. And the growth in your retirement account will be set back three, five, even seven years.

I’ve had people tell me this recent pullback has set their 401(k)s back nearly a decade. They’ve seen years’ worth of contributions vanish in thin air.

They’re losing so much money because they don’t understand what’s happening during this Anomaly Window. So they’re getting bearish and selling at the wrong time.

I don’t want that to be you…

If you don’t have the right playbook to take advantage of this Anomaly Window… you’re either going to cower in fear… or you’re going to wait until it’s too late and buy at the top.”

Here, he is saying that the stock market has been relatively volatile of late and people have lost money. He says that many investors will panic and sell thus missing out on the returns that they may potentially accrue should they hold on and wait for the bull market.

He will probably explain the correlation between those events and the stock market.

Teeka Tiwari considers himself “the world’s most trusted cryptocurrency analyst and investing expert.” A title he claims to have been given by 130,000 independent analysts who voted him the most trusted voice in crypto.

As you can imagine, most of his work centers on cryptocurrencies and blockchain technology. His newsletters like Palm Beach Letter teach people what crypto assets and the blockchain are, how they work, and how you can use them to make life-changing wealth.

Teeka Tiwari is a former hedge fund manager and Wall Street Executive who grew up poor and worked his way to success.

He was born in the UK where he was raised in the foster care system because his parents could not afford to adequately take care of him. When he turned 16, he left the UK and moved to the US, settling in New York. He had $150 in his pocket and the clothes he was wearing when he arrived.

He worked odd jobs until he landed his entry job at Lehman Brothers two years after arriving in the country. By the age of 20, he became the youngest Vice President in Shearson Lehman history.

Teeka Tiwari believes that we are about to experience a key market event that will allow investors to make a lot of money by investing in the stock market. He expects a bull market to take place over the next few years.

He cites a major market event that happened 28 years ago and I have speculated that he could be referring to the bond market collapse of 1994. Either way, he expects it to trigger a stock market rally that will earn big returns in short periods.

We will be following the Crisis & Opportunity webinar and revealing any new information Teeka Tiwari shares.