When Casey Research released a presentation titled “The 5G Keystone” by Dave Forest, I was curious to see what it would be about.

You see, Dave is a natural resource expert and him talking about 5G seemed a bit out of character.

So, I dug in, sat through his presentation, did a bit of research, and put together this article highlighting the key talking points of the pitch. I also reveal what company I think he may be touting.

What is The 5G Keystone (The Pitch)

The 5G Keystone is a presentation by Dave Forest advertising his newsletter, International Speculator. 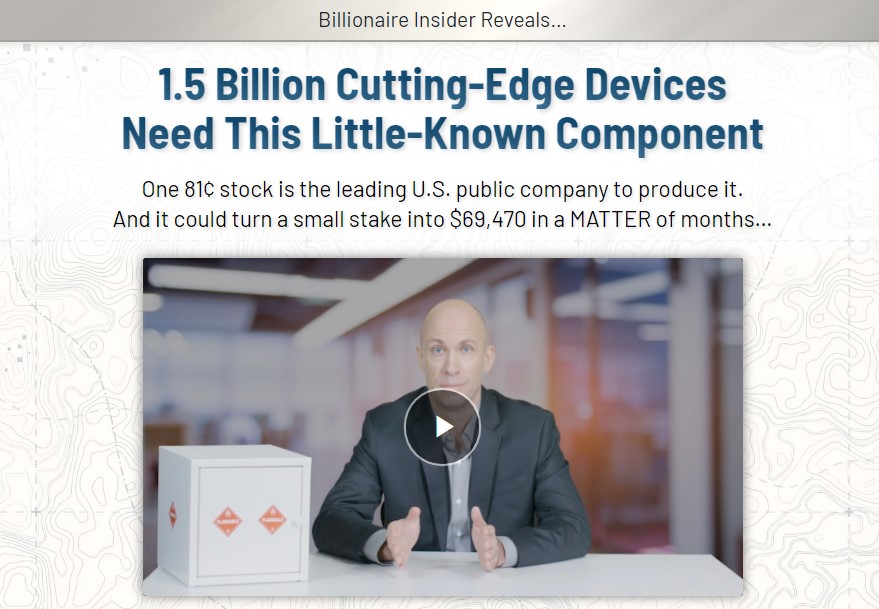 But besides that, it concerns investing in a company that will produce a piece of technology that will help accelerate the 5G buildout. He says that it is a tech component that is so important, it will help launch a $17 trillion industry. He refers to it as a “5G Keystone.”

Here is an excerpt from the presentation:

“But this under-the-radar company is producing a critical component required in every single high-tech device.

Without it, cutting-edge smartphones, state-of-the-art laptops, and self-driving cars will be NOTHING but empty shells.”

According to Dave, the US government has invested millions of dollars in the high-tech device, as he puts it:

“The U.S. Department of Energy invested up to $20 million

The U.S. Department of Defense has poured in as much as $70 million

And the Pentagon has put forward a new legislation that will spend up to $1.75 billion to secure large amounts of this component.”

Besides the government, Dave says the big tech will be clamoring for it. In his own words:

“All the trillion-dollar tech giants are LEGALLY forced to pay for this high-tech component which this company produces.

Because not only will Apple, Google, and Dell all NEED a portion of 92.4 million pounds of this little-known component…”

With the influx of investments from all those parties, Dave says that up to $2.7 trillion will find its way into 5G in just a couple of months.

This sounds similar to what experts like Keith Kohl and Jason Stutman have been saying the past few months.

What really is 5G Keystone?

The tech component he is talking about is neodymium, a rare earth element. It is used to make strong permanent magnets, which makes it an invaluable component of many electronic devices.

More from the presentation:

“According to my research, neodymium — or the “5G Keystone” — will go into more than 1.6 billion 5G devices…

Dave points out that China has dominated the rare earth elements market in the past few decades, which has prompted the Department of Defense to invest in various local companies to put the country back on the map.

And this leads us to the company he says has cornered the neodymium market.

The small company to invest in

Dave acknowledges that some early investors have done well investing in big companies linked to the 5G rollout like Apple, Samsung, and Qualcomm. However, he believes that the big money in 5G is yet to be made and that the best way to do it is by investing in small companies that are not very well-known but whose contributions to the revolution will be significant.

As he keeps reiterating throughout the pitch, he has his eyes set on one small company. Here is an excerpt from the presentation:

To discover it, he says that he had to leverage his connections with three billionaires and an “insider connected to the pentagon” as well as do boots-on-the-ground research in four locations.

So, what is so special about this company?

Dave says that separating and processing neodymium requires intense processing, which this company has perfected. It has proprietary technology that it uses to produce commercial-grade neodymium at a purity of 99.999%.

And, it owns the largest and highest-grade neodymium deposits in North America; 1.2 million metric tons to be exact.

What makes it even more significant is the fact that there is a supply crunch expected to bite in a few months because America does not produce its Neodymium.

What company is he referring to?

He could be referring to Texas Mineral Resources Corp. (TMRC), which has been working on acquiring rare earth processing capabilities. It is a public company that trades on OTC markets.

However, it has not traded at 81 cents per share since April (and hasn’t gone below that since).

He has written a report titled The 5G Keystone: 6,847% Gains as 1.5 Billion 5G Devices Roll Out that contains all the details you need to know regarding the company and he gives it away for free to new subscribers of his newsletter, International Speculator.

Dave Forest is the leading natural resource expert at Casey Research. He joined the firm in 2004 to share his expertise in oil, uranium, natural gas, and renewable energy with retail investors.

He has been involved with the mining sector for more than 20 years during which he has founded mining companies. He has raised more than 80 million from some of the best-known natural resource investors to finance his operations.

Examples of his projects include developing a 10-million-ounce gold deposit in Colombia as well as securing a modern exploration license in Myanmar.

We have encountered his work before as I have reviewed his presentations about Warren Buffet’s #1 Private Investment.

What is International Speculator (The Newsletter)

When you sign up for International Speculator, you will be entitled to:

As a member of International Speculator, you will also receive the following two reports for free in addition to the one about the 5G Keystone stock:

How much does it cost to sign up for International Speculator?

No, it doesn’t. The subscription fee is Non-refundable.

But they do allow you to divert your subscription fee to any other research service offered by Casey Research or their partners if you cancel your membership within 90 days.

Closing Remarks on The 5G Keystone

When Dave Forest released the presentation titled “The 5G Keystone,” he intended to promote his newsletter, International Speculator. Through it, he shares investment advice centered on mining companies with operations anywhere on the globe, so long as it has the potential to earn large returns.

In this presentation, he touts a small mining company that is in the neodymium mining business saying that it will benefit from the 5G rollout. He is expecting the introduction of 5G to cause the proliferation of devices, which will all need neodymium, which we found out is used to manufacture permanent magnets that are indispensable in a majority of electronic devices.

After doing my research, I established that he may be referring to Texas Mineral Resources Corp. To learn more about his analysis, you have to sign up for his newsletter to get the report that has all the details.