He states that there is an overlooked investment that has been on a nonstop tear for 100 months straight that could hit new all-time highs.

The $33 Trillion Rally is a presentation that was released by Banyan Hill Publishing and in it, Ted Bauman talks about investing in a sector that is set to undergo a historic shortage that will create an investment opportunity for those who are sharp enough to see it. He even refers to it as “the investment of the decade.” 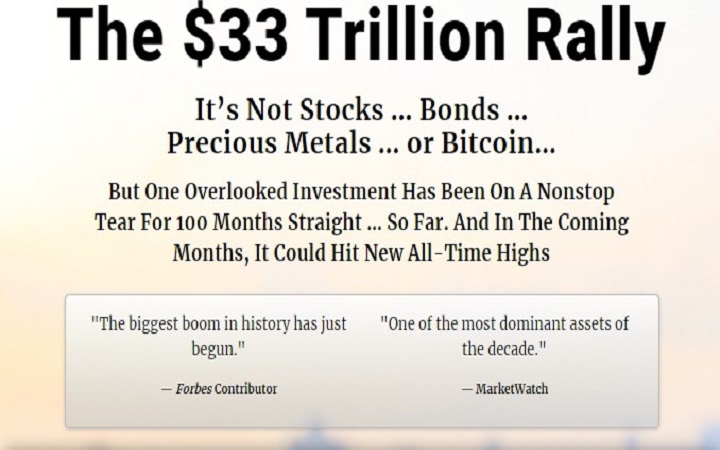 He says that it is an overlooked sector that has been bullish for 100 months. Here is a bit from the pitch from the man himself:

“And yet, I firmly believe that these gains pale in comparison to the potential I see in the investment of the decade.

Yes, it’s rallied for 100 months and counting. But thanks to the biggest supply shortage in U.S. history — combined with a record surge in demand — this one asset is poised to soar off the charts.

It is a sector that can hypothetically keep going up if his predictions are right.

I won’t keep you waiting, he is talking about the real estate industry.

“So what exactly is the investment of the decade?

The investment that has been on a 100-month bull run with no signs of slowing?

That’s right. The house over your head.

Houses just like yours and mine are becoming the hottest commodity on the planet.

But don’t take my word for it. Look at what homebuilding data is telling us…

He isn’t the first investment guru to talk about investing in real estate. We’ve seen people like Marc Lichtenfeld (The Great Real Estate Redo) and Grant Cardone (Cardone Capital) come up with their versions of investing in the real estate market before.

He doesn’t expect the housing market to slow because he has identified a host of “rally signals.” They are:

He allays fears that the new rally in the housing market will mirror the housing bubble that ended in the Subprime Mortgage Crisis because he says that supply and demand were not making sense back then. He also says that borrowing standards are tighter now.

As you’d expect, Ted has an investment that he wants you to consider investing in. It is a company that is in the real estate industry:

“But I have a far more specific, more liquid, and more lucrative, way to play this.

It’s a company located in what CBS calls “the software capital of the world.” Many people may mistake it for just another tech stock.

And it could continue to do that with every home that’s bought and sold over the next 10 years.”

It is streamlining the process of buying a house and is set to benefit from the thriving market:

Sellers get to keep more money in their pockets… Buyers get to spend less on closing costs. It’s a win-win for everyone.

If you were to buy and sell your home through this company, you’d save an estimated $11,800 in transaction costs.

That’s a lot of money that could be put toward remodeling the kitchen … buying new furniture … or putting it into the stock market.

Seeking Alpha called it the “Amazon of real estate” for undercutting the dinosaur competition.

Ted wrote everything he knows about it in a special report called 5X Your Money on the Investment of the Decade.

You don’t have to read the report because after doing some research, I think Bauman is talking about real estate brokerage Redfin Corp. (RDFN). Redfin is a Seattle-based real estate company that began offering online, map-based real estate search capabilities before Google Maps was introduced. This then morphed into the current app and website model it now uses.

It also satisfies more of those clues because Seeking Alpha in one of its articles referred to Redfin as “The Amazon of Real Estate” and CBS once called Seattle “the Software Capital of the World” – and Redfin is based there.

He also teases a company in the lumber market and describes it thus:

“Well, I’ve found the perfect way for you to profit on this booming demand … without dabbling in futures.

Because this one company turns raw lumber into a specialized product that’s used in 65% of new houses being built.

It’s the biggest manufacturer of its kind in the world.

And as demand for new homes and remodeling of existing ones ramps up, this company could reward its investors handsomely.

However, I’m willing to bet not one in a thousand people even knows it exists … a bit shocking since its stock has returned 4,278% since going public in 1999.”

And it specializes in turning lumber into a specialized product…

“This company simply turns raw lumber into a specialized product that’s used in over half of all houses built.”

All the details about this company are in a report he wrote called The No. 1 Stock to Profit From Lumber’s Historic Demand Surge.

The company that fits that description is LL Flooring (LL). Formerly known as Lumber Liquidators Flooring, LL is the largest retailer of hardwood flooring in the country. It had more than 415 stores across North America by the end of 2018. It was started in 1994 and went public in 1999.

A report by the Home Innovation Research Labs in 2017 showed that around 65% of all flooring installed in new homes is hardwood.

He teases another company that is making houses with smart features:

That means new homes come equipped with the tools and technologies millennials have come to know and love.

Things like Alexa … smart thermostats … and other home automation technologies.

They provide a level of convenience and cost savings that homes have never seen before.

The millennial generation grew up with the internet and smartphones, and they’ll demand them for their homes as well.

In fact, these buyers are willing to spend 20% more on their homes if they come with smart home features.

And this one company can deliver it to them in 76 of the most popular housing markets in the U.S.”

All the details are in a report called Buy Now! The Millennial Homebuilder of the Future.

Lennar recently released its new “Wi-Fi certified home designs” which meant that it was integrating its designs with automation and voice control with Alexa. Its designs enable buyers to control lights, thermostats, and their front door locks using Alexa.

To get all those reports for free, you have to sign up for The Bauman Letter, which we will delve into later.

Ted Bauman is a professional trader and stock analyst who is part of the editorial team at Banyan Hill Publishing. He edits The Profit Switch, Bauman Daily, and The Bauman Letter.

He was born in America and moved to South Africa where he graduated from the University of Cape Town with postgraduate degrees in economics, economic history, and economics. While he was in South Africa, he served in a variety of roles in the non-profit sector.

He worked as a consultant for a wide range of international clients and it was then that he says he learned that anyone can become wealthy. He joined Banyan Hill and has been working for the firm ever since.

What is The Bauman Letter? (The Newsletter)

The Bauman Letter is the main investment research service that Ted edits at Banyan Hill. He says that when you become a member, you will have access to the kind of opportunities he touts in the presentation (the three companies he teases).

He promises to keep you up to date on the latest in the housing market as well as opportunities that are not talked about in the mainstream. In the past, he has recommended plays in silver, tech, and new energy to his subscribers.

The service is meant for “everyday Americans” whom he says he wants to help achieve their dreams.

That being said, when you join, what does being a subscriber entitle you to?

How much do you pay to join The Bauman Letter?

A full year of The Bauman Letter costs $47.

The newsletter has a 365-day money-back guarantee.

Closing Remarks on The $33 Trillion Rally

The main story in Ted Bauman’s presentation about “The $33 Trillion Rally” is not so much about that figure. The discussion centers on investing in the housing market because he expects it to continue being bullish into the foreseeable future. One of the key reasons for this is what he cites as a market squeeze, whereby demand for housing outstrips supply – which he says the 2008 real estate bubble lacked.

Ted Bauman is not wrong when he says that when the supply of a product falls and demand for it goes up, it results in a company involved soaring in the market. However, do not follow his advice secure in the knowledge that his “investment of the decade” will pan out as he says it will.

The market is riddled with risks and you should temper your expectations if you are to get involved.