The 2021 Tech Supercycle Summit by Eric Fry and Louis Navellier has been getting a lot of attention in recent weeks.

The event, hosted by the two veterans, is supposed to reveal a new category of companies that can potentially make you rich if you move on them before other investors catch wind of them.

In this article, we examine what this means and whether you should pay attention to what Louis and Eric are proposing.

What is The 2021 Tech Supercycle Summit?

The 2021 Tech Supercycle Summit is an event featuring Eric Fry and Louis Navellier where they discuss investments in the technology sector. 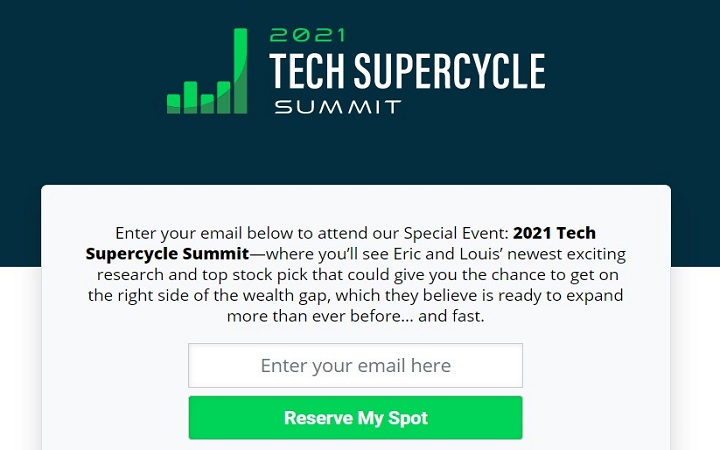 On the landing page promoting the event, it reads,

“In under an hour, you’ll learn how one incredible new technology is going to lead to $56 trillion in new revenue…

How it could send certain tech stocks to incredible new highs…

And how you can leverage this new development to potentially put an extra $100,000 or more in your pocket 12 months from now.

To prove it, Eric and Louis are going to reveal the #1 stock to own today during the event…

It’s a small, innovative company that could be a BIG winner as the Technochasm phenomenon accelerates.

This excerpt shows you pretty much what the event is all about.

But hang on, haven’t we seen Eric Fry and Louis Navellier host an event before that was called The Technochasm Summit?

Which begs the question…

Is this just a re-hash of The Technochasm Summit? 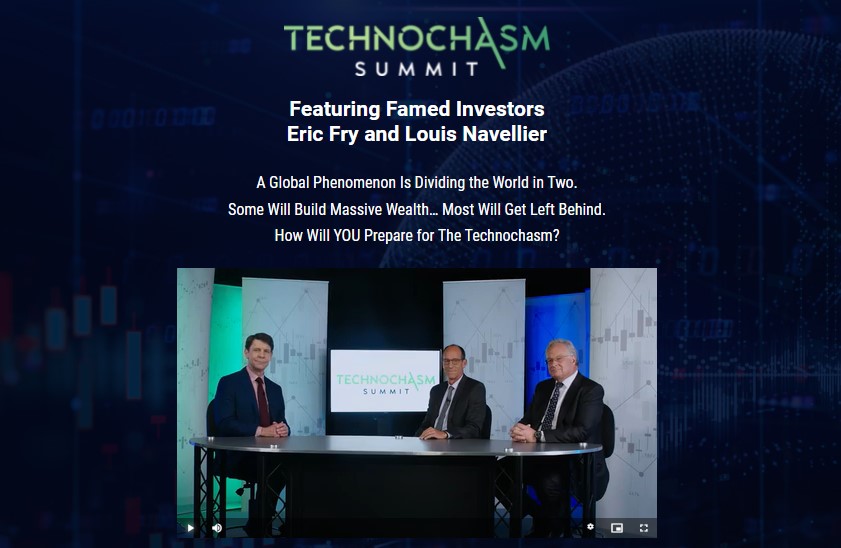 During the event, they were discussing what Eric referred to as “a global phenomenon” that he believed was dividing the world in two. What he meant was that the rich were getting richer and the poor were getting poorer.

The key driver of this was tech stocks – hence the moniker “Technochasm.” This made sense because billionaires who added billions to their net worth during the pandemic were predominantly in tech.

Therefore, Eric and Louis were signaling that investing in tech stocks was the way to go.

They even teased one tech stock and it peculiarly matches the description of the 1,000% projection they are making in their new campaign.

Here is an excerpt from The Technochasm Summit:

It has recently been recognized as one of the fastest-growing technology companies in North America.

Which is no easy feat.

But the best part is, it has now set its sights on disrupting the 16 trillion-dollar commercial real estate industry…

And the $849 billion legal industry.

I better stop there before I give too much away.

But this company has 1,000% potential written all over it.

They were teasing six other stocks (for a total of seven recommendations) in the presentation but the fact that one of these matches with their previous ones shows that they could be revisiting the presentation.

However, I am not certain about this as they may do an entirely new presentation with new recommendations.

Who are the experts behind The 2021 Tech Supercycle Summit?

The two experts are part of the InvestorPlace editorial team. 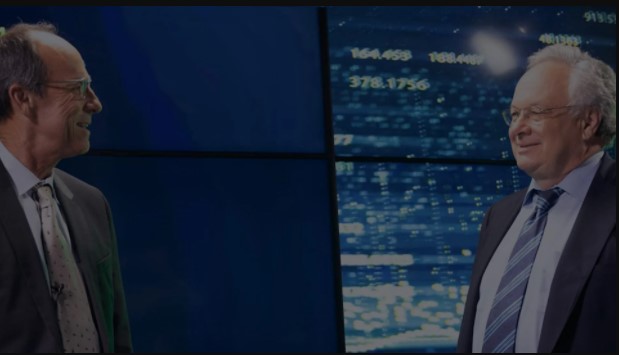 Louis Navellier is one of the most prolific investment gurus in the market. He regularly does presentations advertising his work. A few I have encountered in the past include “I’m A One Percenter Pitch” and The Accelerated Wealth Summit.

Louis Navellier’s shtick is that he is “one of Wall Street’s renowned growth investors.” He has been offering financial advice for over 35 years now and has established an exceptional track record.

Navellier has a fund management company called Navellier & Associates that manages over $5 billion in mutual funds and institutional accounts.

He relies on powerful tools to beat the market and is known for relying on computer algorithms to gain an edge. In an article promoting The Technochasm Summit last year, here is how he described his approach:

“My system analyzes over 4,000 stocks, grades them according to the individual qualities listed above, and also combines the individual metrics to create an overall composite grade for any stock. These grades are just like the ones in school. When I see a business with the highest growth and business quality ratings, the stock gets an “A.” A stock with miserable ratings gets an “F.” The result of all this work? My readers — and now some of Eric’s readers as well — get to buy the world’s fastest-growing companies — and hold them through their most successful years of expansion.”

He also insinuated that he relies on a hybrid system of fundamental and technical analysis:

“Through extensive analysis, I isolated the eight key qualities that these super-performing stocks shared … and developed a system for riding them.

The research I did back then serves as the foundation of what is now my advanced, high-tech method of computerized market analysis.

As I said, it was like an early version of the Technochasm that is the focus of our upcoming summit — technology beating out the old ways of doing things.”

He considers himself a quantitative analyst.

Eric Fry is known as a specialist in international equities with nearly two decades of experience in that area. He has worked as a portfolio manager specializing in short-selling and international strategies.

He also has a long-term track record that includes calling many 10-baggers (stocks that rose 1,000%).

Eric Fry is best known for his success as a short seller. For example, he made a fortune when he went short during the Dot Com Bubble as well as when he repeated this during the collapse of the housing market in 2005 and 2006.

If you want to book your seat at the 2021 Tech Supercycle event, you must do so using your email address: 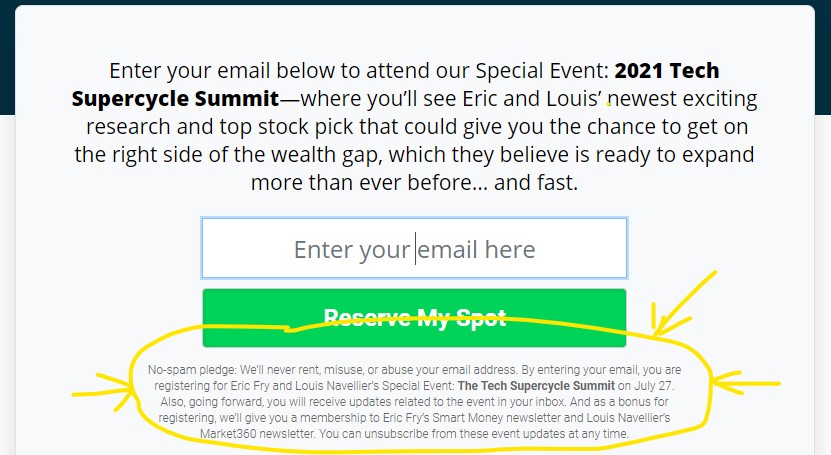 If you register with your email address, be careful because when we zoom in on the fine print, it reads:

“No-spam pledge: We’ll never rent, misuse, or abuse your email address. By entering your email, you are registering for Eric Fry and Louis Navellier’s Special Event: The Tech Supercycle Summit on July 27. Also, going forward, you will receive updates related to the event in your inbox. And as a bonus for registering, we’ll give you a membership to Eric Fry’s Smart Money newsletter and Louis Navellier’s Market360 newsletter. You can unsubscribe from these event updates at any time.”

This means that you will be added to both mailing lists and you will periodically receive emails from InvestorPlace. Typically, they will be promoting other services and products but you can unsubscribe at any time.

Eric Fry and Louis Navellier are co-hosting this event to talk about investments in the technology sector, something they’ve done before when they did the Technochasm Summit.

If what they talked about during that event is anything to go by, expect them to tease a few small-cap technology stocks that they think have immense potential.