Angels & Entrepreneurs has been promoting the 1600 Success Summit a lot of late; therefore, when I received an invitation, I was curious to find out what it is about.

So in this article, I will be walking you through what you should expect from the webinar if you want to attend it.

The 1600 Success Summit is an event that will be held on January 21 and presented by Abe Wagner. It will be hosted by Angels & Entrepreneurs. 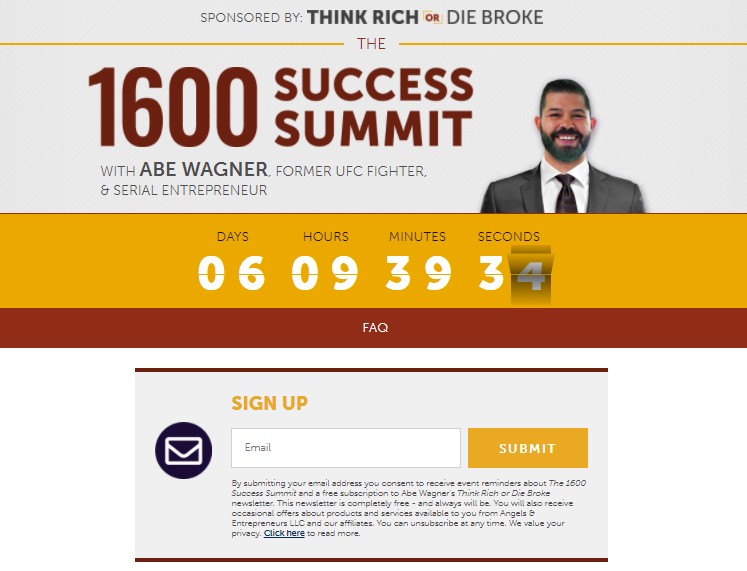 The summit will be all about showing you how to make money; they haven’t revealed much more about it. In the invite, Abe starts by mentioning that a majority of Americans are not happy with how much money they are earning:

“Did you make as much money last year as you wanted?

For most people, the answer is no. A whopping 81% of Americans are not happy with how much money they’re bringing in.”

And right after that, he starts talking about how you can change your situation if you belong to that group (of dissatisfied citizens). He says that the only way to do that is by letting him show you how to make money.

Abe then goes on a tangent narrating his rags-to-riches story to demonstrate how he beat the odds to make something of himself. He says that his parents were poor and that he lived in a bad neighborhood. Then as a teenager, he became a UFC fighter and now runs successful businesses online that earn him over $300,000 a month even though he spends less than four hours a day on them.

He says that it took him 35 years to get into what he does now because he had no one to guide him. Therefore, he wants to use his experiences to show you how he got his finances in order.

Who is Abe Wagner?

Abe Wagner will be hosting the 1600 Success Summit. Now, I have to admit that I had never encountered his work in the finance sector, as I am sure most of my readers haven’t. However, I knew him (not personally) as a UFC fighter and nothing else.

Abe Wagner is a former professional UFC fighter who competed in the heavyweight division; he now regards himself as a self-made millionaire.

His career extends beyond the cage – he is an entrepreneur who runs four companies. On top of that, he is an inventor with four patents. He is also a forensic accountant and a mechanical engineer.

He came from a humble background and tells us that his parents made only $20,000 per year combined. His life changed for the better when he became an athlete and he lived comfortably for most of his 20s. However, he wasn’t great at managing money and didn’t take advantage of the opportunities afforded to him.

When he turned 35, he decided to do things differently to secure his finances. He insists that this summit will let him talk about the money mistakes he made along the way as well as share insights into how you can make 2021 a profitable year.

How to attend 1600 Success Summit

To attend the 1600 Success Summit, all you need to do is sign up by providing your email. Since the event will be virtual, you will be accessing it over your internet-enabled device. The event is free to attend.

As soon as you sign up for the event using your email, they will be sending you reminders about the event and also add you to Abe Wagner’s mailing list for his free newsletter, Think Rich or Die Broke. Therefore, don’t be surprised when you start receiving emails from Abe.

Closing Remarks on The 1600 Success Summit

The 1600 Success Summit by Abe Wagner is just like any other webinar we have reviewed here before i.e. it is meant to tease some investment opportunity or reveal Abe’s strategy and promote an advisory service.

If you register but cannot attend the event for whatever reason, you will receive a recording right after it has taken place.

Abe is not forthcoming about what we should expect from the summit and I haven’t encountered his work before. So, I can’t give you a clearer picture of what to expect beyond his declaration to help you become a millionaire.