For the past few weeks, Banyan Hill Publishing has been heavily promoting Paul Mampilly’s presentation about The 12 Million Mile Battery.

If you’ve received one of those emails, it might have caught your eye that Paul is promising to help you add a few extra thousand dollars to your account without risking much.

And it is all predicated on the “new energy market” that he claims will create new millionaires in the next ten years.

Therefore, in this article, we will be taking a closer look at his claims to help you to quickly understand what he is proposing here and whether you should consider going a little further with his recommendations.

What is The 12 Million Mile Battery?

The 12 Million Mile Battery is a pitch by Paul Mampilly for his investment newsletter, Profits Unlimited.

Before it gets to that, he talks about a company manufacturing a “super battery,” and how it is going to corner a new energy market, inevitably increasing its value. 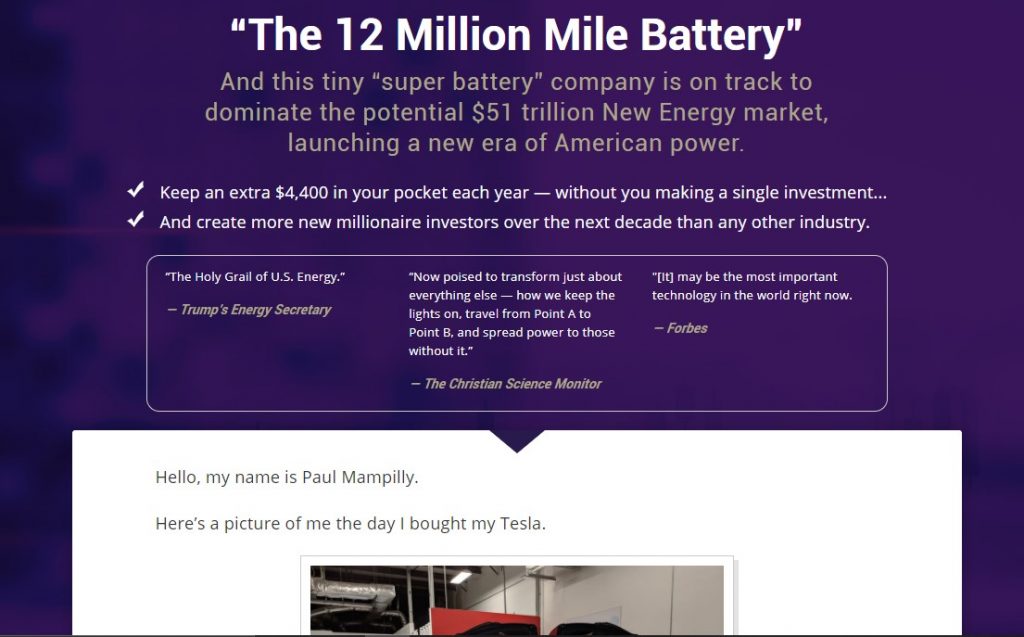 At the beginning of the presentation, there’s a picture of him with his new Tesla which sets him up nicely for what he is about to delve into: Battery technology.

He claims that there is a new battery that will revolutionize the industry:

I should clarify that he is not referring to a solid state battery, as was the case in a presentation by Matt McCall titled Breakthrough “Quantum Glass Battery.”

Mampilly expects the new battery to make EVs the most dominant automobile of the next decade. He also expects it to create a highly-valuable sector:

“That’s why I foresee this market surging up to 20,300% … from an estimated $250 billion niche into a potential $51 trillion industry over the next decade.”

The new battery will be used to power 50 million American homes, courtesy of an order from the federal government that will help ease it into mass adoption:

“Federal Order 841, a mandate from the federal energy agency, is launching a historic rollout to help ensure the use of this battery technology nationwide.”

Mampilly mentions that the new, and improved battery will launch three trillion-dollar markets:

The technology behind the super battery

The super-battery has been made possible by introducing a new formula that modifies the silicon anode used by the batteries we use currently. Paul says that this has been aided by a “nanopowder” that supercharges the battery by 2,500%.

The problem with the silicon anodes used now is that they expand and retract during the charging and recharging cycles. This makes the battery fracture after a few cycles.

The new material overcomes that, as Paul explains:

“This is what I’ve been calling nanopowder.

Simply because of their size, the nanoparticles do not expand as much as typical forms of silicon.”

For an even more technical explanation, he goes on:

“This company created a microscopic shell — made out of silicon — that holds the atoms inside.

Inside there’s a ton of room to expand and shrink…

So once the lithium ions are absorbed, the particles expand within the shell casing — but not outside.

And this leaves the outer layer of the battery’s electrode untouched … and undamaged.

This means you get ALL of the power — with none of the changes in size that crack the battery.”

The company behind the new battery technology

From an investment standpoint, the new technology will only be as good as the opportunity it creates for traders and Mampilly has isolated the company behind it.

He says that the technology is protected by 100 patents, owned by a relatively unknown California company. Here are a few clues regarding the company:

It was started by a former Tesla employee:

“Rather, it’s a little-known California company … started by one of Tesla’s original employees.

You could call him the secret behind Tesla’s success … even one of the “fathers” of the electric car revolution.”

“That’s why, already, this company is growing at a rate of about 50% every year — just as Tesla did early on.”

Paul has written a dossier containing details about the company titled $51 Trillion in Endless Energy: Get Rich on the Battery Breakthrough of the 21st Century. The only way you can get your hands on it is by subscribing to his newsletter, Profits Unlimited.

But, you won’t have to do that because I discovered the name of the obscure company he is talking about.

It is called Sila Nanotechnologies. It was started in 2011 by Tesla’s “employee number 7” who goes by the name Gene Berdichevsky. It is based in Alameda California.

Here is a quick description of how their improvement on battery technology works, gleaned from a Forbes feature about the company:

“In this regard, their product is a powder that replaces graphite powder in existing lithium-ion batteries. The more efficiently you can store lithium, the less material you need for the same amount of energy. Sila Nano’s material can store energy more densely, giving you more energy at similar volume and weight.

The company is private and already has surpassed the $1 billion mark (making it a Unicorn startup). Therefore, you won’t find its shares trading on NASDAQ, yet.

Paul Mampilly is a stock analyst and an editor of several investment newsletters, including Profits Unlimited, Rapid Profit Trader, True Momentum, Extreme Fortunes, IOP Speculator, and the 100X Club, just to mention a few. He publishes his work via Banyan Hill Publishing.

He has published a book called Profits Unlimited: A Wall Street Insider Reveals the Secret to Life-Changing Wealth in which he teaches his readers what he considers as the investment secret to securing financial independence.

Before he got into writing newsletters, Paul was a successful hedge fund manager. He spent 25 years managing accounts for institutions like ING, Deutsche Bank, and The Royal Bank of Scotland.

One of his most impressive feats was helping grow the assets of a hedge fund he was working for from $1 billion to $6 billion. This caught the attention of Barron’s and they gave his fund a “world’s best” designation.

He also participated in an investment competition right in the middle of the 2008 Financial Crisis, which he won by growing a $50 million account to $88 million.

So, why did he quit from his well-paying job and start offering advice to retail investors?

The short answer is His moral compass.

Here is how he explains it on his website (paulmampillyguru.com)

“However, I didn’t retire in the sense of the word everyone is used to. I retired from Wall Street. I just couldn’t bear to be making money for the sake of making money for some of the richest people in the world.”

Thus he started offering the services he does now to retail investors.

What Is Profits Unlimited? 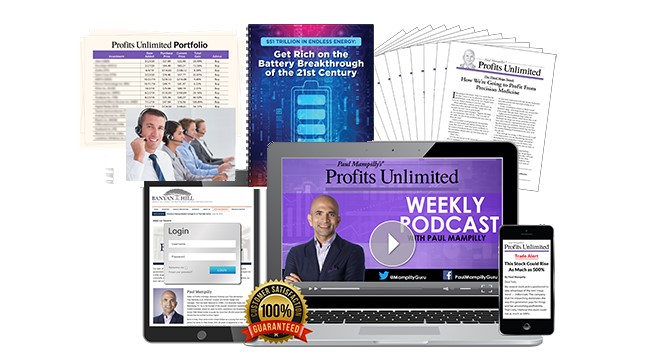 Profits Unlimited is probably one of the most popular newsletters that Paul publishes (and he publishes a lot of newsletters). To understand how impactful it has been, he’s even written a book by the same name, which wouldn’t be the case if it was a flop.

He describes it as “an investment system and weekly tech stock newsletter.” And with it, he focuses on tech disruptors in things like the Internet of Things (IoT), self-driving cars, and blockchain.

I think it is because it is one of the well-received advisories he offers (enough to write a book about it).

If you decide to become a subscriber, you will be entitled to:

If you subscribe via the pitch (the link that comes after the pitch), you will pay $47 if you are among the first 1,000 people to join. The usual price is $199.

If you decide to cancel your membership any time within twelve months, you will be entitled to a full refund of your $47. 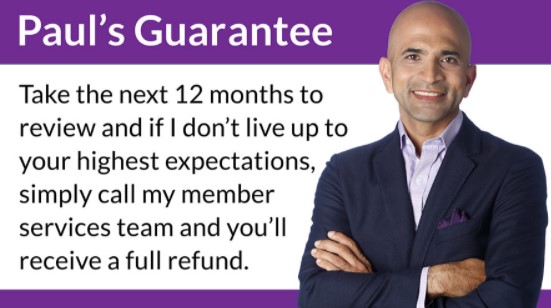 The 12 Million Mile Battery is about a company (Sila Technologies) that has created a proprietary nanomaterial that will be added to the Lithium-ion battery to make it more effective at storing energy while reducing battery weight.

It is a private company and, therefore, you can’t buy its shares publicly. You can still invest in it as such as you wait for an IPO.

The startup appears to be a decent prospect, having already attracted some high-profile venture capital firms in its funding rounds. It is also run by one of Tesla’s original employees, adding to its credibility. If it can find a way to mass-produce its product, it may prove to be a good investment.