Teeka Tiwari has always been a proponent of investing in cryptocurrencies, and in his latest presentation, which I’ll call The 1170 Account, he shares his most recent proposals of how to go about it.

In it, he talks about a new type of account that “the elite” are opening with financial institutions and earning up to 172X the returns of an average savings account. He sees it as a way for investors to earn higher gains at a time when savings account are attracting very low yields.

In this article, we explore the presentation and unravel what it is about so that you can better decide what to make of Tiwari’s proposals.

The 1170 Account is a presentation published by Teeka Tiwari to promote his newsletter, The Palm Beach Letter. 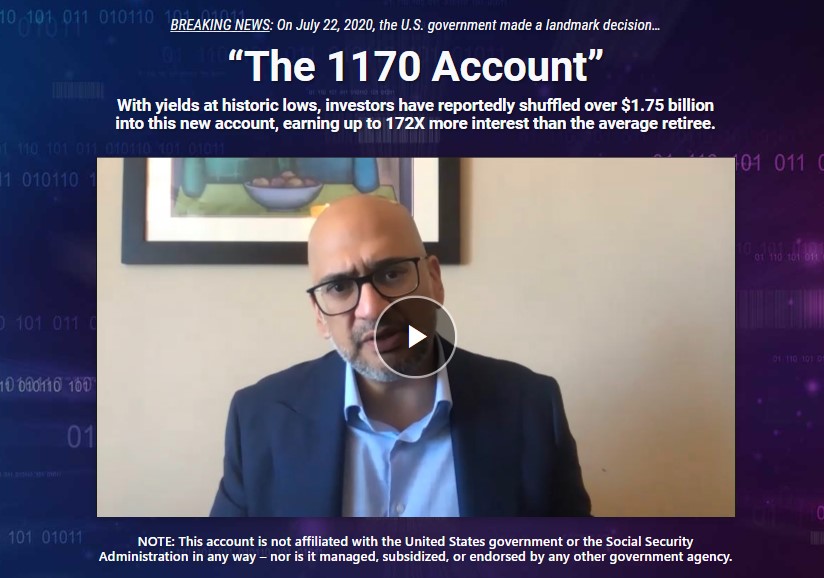 But before he gets to that, he talks about a type of account that enables retirees to earn up to 172 times more on their deposits than with the average savings account.

(Later in the pitch, we learn that when Teeka Tiwari mentions that the new account will yield 172X more returns than the ordinary account, he is referring to its 8.6% interest rate as opposed to the average rates earned on normal savings accounts of 0.05%.)

He begins the presentation by demonstrating how low-interest rates on savings have fallen.

He gives the example of how the interest earned by depositing $100,000 in the bank for one year can only buy you a Big Mac combo these days while 20 years ago, the same deposit over the same period would have earned you enough interest to buy an expensive meal and still leave you with $4,800 to spare:

“Look. Fact is, what big banks pay today is brutal…

Today, you’re lucky if you get one one-hundredth of that.”

And he has a point because, during the pandemic, interest rates have fallen even further with high-yield saving accounts paying just 1%, down from 2.5% in 2019.

Teeka says that this is making it tough for retirees to make their money work for them leaving them with no option but to delay retirement, live poorer lifestyles, or gamble with risky investments like penny stocks.

He has found a way that you can earn up to 8.6% off of your savings by using a new kind of account:

“You see, it’s all thanks to a new kind of account, which American banks have just been authorized to offer by the United States government.

It all has to do with a directive made by the Office of the Comptroller of the Currency (OCC), which regulates and supervises national banks:

It’s called the Office of the Comptroller of the Currency (OCC).”

So, the OCC has issued a document called “Interpretive Letter #1170” that allows national banks to open the new high-yield account.

This reminds me of a presentation he released (and that I reviewed) that conveyed a message that was related to this. The premise of that presentation, dubbed “New Banking Rule Set to Affect 234 Million Americans,” was that the OCC is letting banks create accounts that hold cryptocurrencies as an asset.

Blockchain and its links to the ‘1170’ Accounts

Later in the presentation, he reveals that the 1170 account is linked to blockchain:

He says that blockchain could grow by up to 295,000% by 2027 as per the projections of the World Economic Forum. This means that these special accounts could benefit from this growth, thus explaining the big returns.

As the pitch progresses, Tiwari starts talking about household-name investors investing in a company that is offering special accounts:

Among those “elites” are billionaires, former executives, and celebrities. Even pension funds, which he says are known for being risk-averse, are getting in on the accounts. And apparently, this company also has a two-year head start.

He doesn’t reveal much about the company beyond that but says that he has written a report called The “1170” Account: How to Earn Up to 172X More in Retirement that has the details you need to open an account with it.

To receive a free copy of the report, you have to subscribe to The Palm Beach Letter, an advisory service Teeka Tiwari publishes.

His is the classic rags-to-riches story whereby he began his career on Wall Street in 1989 two years after arriving in the US from the UK as a 16-year-old with only $150 to his name.

He says that he had to work hard for everything he got and that enabled him to rise through the ranks until he was a hedge fund manager.

Driven by a desire to help out the ordinary people he felt he resonated with (i.e. “remembering his roots”), he quit his job and started teaching them how to make more money on their investments through his newsletters.

Tiwari wanted them to leverage his experience as a Wall Street insider and his list of contacts.

Nowadays, most of his work centers on cryptocurrency-related investments as we’ve seen in his previous teasers like 5 Coins to $5 Million and Genesis Technology.

What is The Palm Beach Letter? (The Newsletter)

The Palm Beach Letter is the flagship newsletter offered by Palm Beach Research Group. It has nearly 112,000 subscribers. 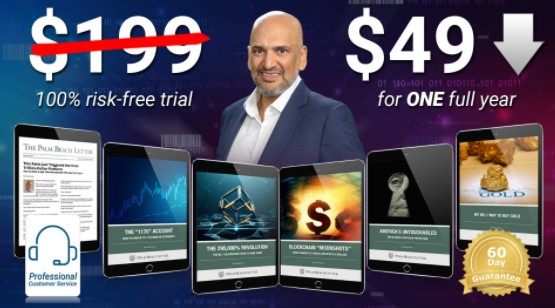 It is headed up by Teeka Tiwari and through it, he explores the biggest trends in the market and selects the best opportunities to make money off of them.

Although a majority of his recommendations are crypto-related, anything that can earn money goes. Therefore, he doesn’t shy away from income-generating stocks, precious metals, real estate, and commodities.

When you subscribe to the service, you can expect to receive investment proposals from him every month on the first Thursday (or in-between if an opportunity is urgent).

In addition to that, when you sign up for the newsletter via this pitch, he promises to send you a couple of reports with investment opportunities he sees as potentially profitable. These reports are:

How much do you pay to join The Palm Beach Letter?

Does The Palm Beach Letter have a Refund Policy?

It comes with a 60-day money-back guarantee.

As I said, The 1170 Account presentation by Teeka Tiwari has a few similarities with the other presentation he released called New Banking Rule Set to Affect 234 Million Americans.

In both of them, he mentions that the OCC is allowing banks to create “special accounts” and that those accounts will be linked to cryptocurrencies/blockchain. But that’s as far as the similarities go because, in the new presentation (The 1170 Account), he is teasing a financial institution that opens the accounts while in the old one, he was urging people to buy digital currencies.

Unfortunately, he didn’t offer us enough clues to determine what institution he was talking about. Instead, he wants us to subscribe to The Palm Beach Letter for $49/yr to receive a free report that furnishes us with the details.

Teeka Tiwari has been going on about investing in cryptocurrencies as far as I can remember and it appears he has got a few things right along the way. For example, in 2020, Bitcoin has been the best performing asset and other altcoins also appear to be doing well on average.

However, that doesn’t guarantee that his outlook is spot on, and “1170 accounts” will make you rich. Therefore, you should proceed with caution and do more research on the investments before you get involved.