Luke Lango, the latest member to join the editorial team at InvestorPlace recently did a presentation called The 10X Anomaly Summit.

Besides advertising his newsletter, he was talking about his investment strategy which he claimed had an “86% Success Rate… 82 Doubles… 46 Triples… Sixteen 500%… And Multiple 10X Gains… In Less Than 9 Months.”

In this review, we take a closer look at the presentation to enable you to better understand his investment strategy.

Introduction to The 10X Anomaly Summit

Although the main reason Luke Lango did The 10X Anomaly Summit was to promote his new premium advisory service, The Daily 10X Stock Report, there was more to it than that. 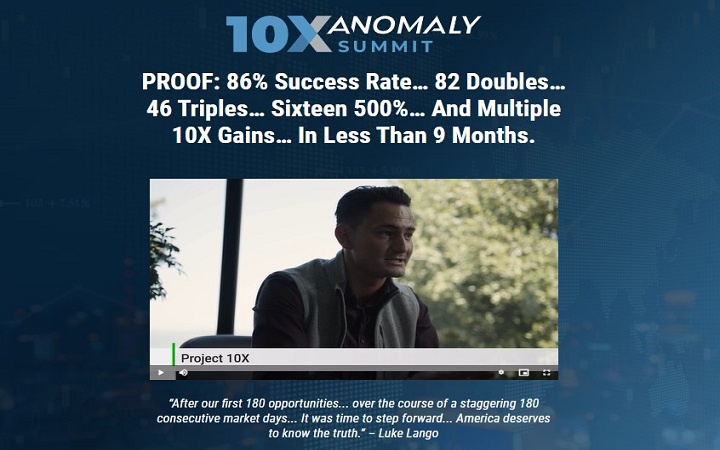 As he was discussing the investment strategy on which the newsletter is based, he revealed a few elements of his approach that are a bit interesting.

First, Luke Lango says that he conducted a controversial experiment called “Project 10X.” Its goal was to determine whether his strategy would yield high returns while investing in real stocks with real money.

He enlisted 462 followers who were brave enough to follow his instructions and risk their money on these trades.

And after testing his strategy on 180 consecutive days, he delivered his promise to the followers. He says that they had a real chance at 2X, 3X, and even 5X returns on their money sometimes in as little as 29 days without investing in stock options and without spending all day staring at stock charts.

Luke says that his recommendations were easy-to-place trades that you can make with an ordinary brokerage account. Describing this in the presentation, here is how he puts it,

What is about to be revealed to you, here for the first time… is a battleground-tested strategy.

The full results of “Project 10X”…

Resulting in an extraordinary REAL-WORLD win-rate… of 86%.”

Luke claims that he had a win rate of 86% on average after compiling the results of his “experiment.”

While this is impressive, you should understand that sometimes, a high win rate does not translate to success.

What is a Win Rate?

Win rate is defined as the number of trades you record as a win out of all trades you place. For example, if you place 10 trades and 7 of them are wins, you have a win rate of 70%. The caveat is that having more wins does not mean you are a successful trader if your losses are greater than your wins. Therefore, the number of wins, while a good metric for measuring success, is not the most reliable.

Many investment gurus focus on their win rate as they market their newsletters because a number above 50% sounds successful. Therefore, before you decide to sign up for a trading service, look beyond that.

What is the 10X Anomaly?

Going back to the presentation, Luke Lango claims that there is a stock market phenomenon that unlocks the hidden potential of certain stocks driving their prices through the roof. They earn gains of up to 10X.

And it all stems from the work of Eugene Fama, while he was a student at the University of Chicago in the 1960s. He published a theory in a 1970 publication called Efficient Capital Markets: A Review of Theory and Empirical Work.

He proposed that the markets are too efficient to be predictable and that no one can beat the market. This implied that even Wall Street’s money managers would be better off NOT trying to pick winning stocks and instead focus on investing in the market as a collective.

And this is where Luke Lango believes “Project 10X” deviates and takes advantage of an anomaly that was spotted by Rolf Banz. Rolph was Fama’s student and he discovered that there was a mysterious stock market phenomenon that allowed certain stocks to outperform the market.

He described it as “The ‘Crack in Efficient Market Theory.’”

Banz discovered that if you invest in small firms (small-cap stocks), you can beat the market. To prove his theory, he tested it to “the breaking point” and concluded that the results were real.

His work led to the development of The Russell 2000® Index, which he shows has been outperforming the S&P 500: 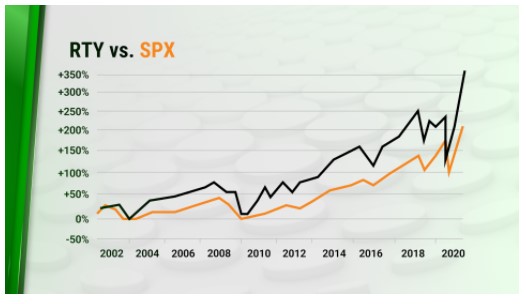 This is the anomaly Luke is talking about because it is what his investment strategy is based on: investing in small-cap stocks.

Luke Lango goes beyond The Russell 2000® Index because he says that the gains you make from investing in it are not big enough if you don’t want to wait long. He says,

“But ‘Project 10X’ took these findings to a whole new level.

You see, you could invest in a Russell 2000 stock index fund…

But that’s not going to make you rich… at least not anytime soon.

Is scouring the universe of tiny stocks hidden deep within the market… and targeting only those firms with shares with massive upside potential.”

Therefore, he picks individual companies from the index and invests in them. Throughout the presentation, he gives a couple of examples of such companies and the gains they have made him over the years.

He says that this approach has enabled him to beat the market and he likens it to asymmetrical investing. He says,

“You’re actually tapping into yet another powerful moneymaking strategy…

Asymmetrical investing is not a complex concept. It means that when you invest, the potential gains you can make from your investment are greater than the risk you are taking.

To invest like Luke Lango, you have to join his financial advisory service, The Daily 10X Stock Report.

Who is Luke Lango?

Luke Lango is a relatively new name in the world of financial newsletters. He works for InvestorPlace, an independent financial publishing firm that is behind newsletters like Fry’s Investment Report and Matt McCall’s Bull Market Confidential.

He is a former Silicon Valley venture capitalist who started his career in finance while he was attending CalTech (California Institute of Technology). He started or funded three businesses from his dorm room before he graduated.

The three companies Luke Lango invested in or started include a social media company, an equity research group that linked new tech upstarts with seed investors, and a sports data analytics company. He co-founded the analytics company with a general manager of a Major League Baseball team.

He started picking stocks and was named the #1 ranked stock picker in 2020 by TipRanks.

Luke Lango’s Daily 10X Stock Report is a brand new investment advisory service that will be published by InvestorPlace – and, of course, edited by Luke Lango.

He will be targeting small-cap stocks that are getting little to no attention from Wall Street analysts and mainstream financial publishers. In that sense, it is a bit like Microcap Profits Club (by Robert Williams).

Luke says that when you sign up for his newsletter, you will benefit from the hard work he puts into discovering the best small-cap stocks. He says that he analyzes many stocks by filtering the SEC filings, digging through annual reports, meeting the CEOs, and visiting company headquarters to see how they are running on the ground.

What does becoming a subscriber of The Daily 10X Stock Report entail?

You get a brand new issue of The Daily 10X Stock Report before the market opens on each trading day. Inside, there is a write-up of new small-cap stock with massive upside potential along with Luke Lango’s brand of research.

You also get a copy of The Daily 10X Stock Report “Strategy Guide.” In this report (83 pages long), Luke explains how you can get the most out of your subscription. He reveals different methods or strategies you can implement that may maximize your gains.

How much is The Daily 10X Stock Report?

The annual subscription fee is $897

The newsletter has a 30-day money-back guarantee. 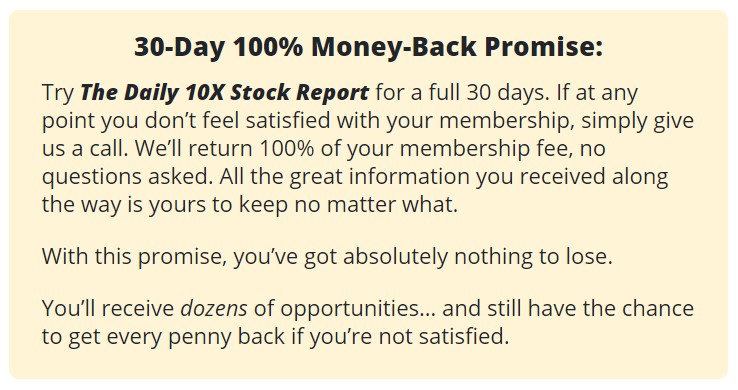 Read the terms and conditions for more details on the refund policy because there tend to be some hidden terms in the fine print with some newsletters.

The 10X Anomaly Summit was meant to introduce us to Luke Lango’s Daily 10X Stock Report, a new financial newsletter that will now be published by InvestorPlace.

Throughout the presentation, he waxes lyrical over how his test results were good to prove that his investment strategy is sound and profitable. This is what we have come to expect of such presentations, so nothing was surprising.

All this is based on investing in small-cap stocks. Luke argues that small-cap stocks do not get analyst coverage, which means that many small firms are being ignored and in the meantime, they possess massive potential in the market.

Such stocks tend to be more volatile and carry more risks than big companies, but they also offer greater potential rewards. Be wary of them.