Jason Stutman recently released a presentation promising to provide his audience with details concerning a “tiny $5 stock” that can “transform every $500 invested into $1.5 million.”

According to Jason, the company, which he dubbed The #1 Stock of This Generation, will be part of an industry that will boom in the next couple of years.

In this article, I will walk you through the presentation, revealing the reasoning behind Jason’s assertions. I will also unveil the name of his number one stock pick.

What is The #1 Stock of This Generation? (The Pitch)

The #1 Stock of This Generation is a presentation by Jason Stutman advertising his newsletter, Technology and Opportunity. 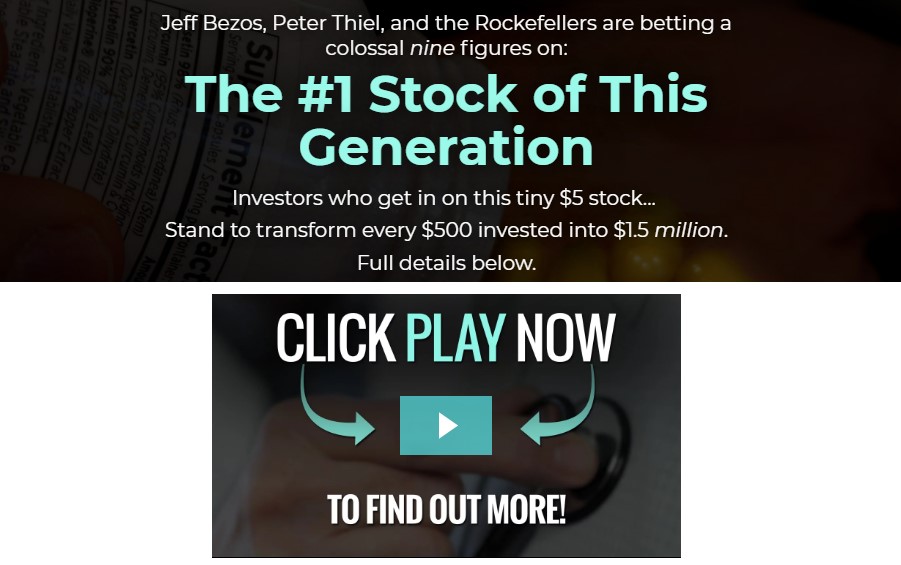 Beyond that, it focuses on a company that, at the beginning of the pitch, he claims is working on a revolutionary new technology “that will reshape human history more than the atom bomb, the combustion engine, and the electric lightbulb combined.”

The technology he is talking about is an anti-aging pill that reverses the effect of aging, eradicating the diseases normally associated with it.

As the video goes on, he claims that big-name investors like Peter Thiel, Jeff Bezos, and even hedge funds like Venrock have taken a keen interest in it. Institutional investors have also invested:

“And institutional heavyweights like BlackRock, Vanguard, Renaissance Technologies, Goldman Sachs, and Charles Schwab have all been tripping over each other to get in as well.

They’ve poured more than $31 million into this small firm, ratcheting up their investments by 371% over the past few months.”

He says that the anti-aging industry is worth $15 trillion, a valuation he arrives at by adding up the various healthcare services and products that people who are aging rely on. This includes things like retirement homes, hospitals, pharmacies, gyms and spas, and the likes.

Jason says that when it comes to illnesses and conditions that afflict old people, doctors have been developing techniques to deal with each of them individually.

However, that approach is not the best one because one small biotech firm has discovered the root cause of all aging and disease, which if dealt with, can vastly improve people’s lives:

Aging and its complications can be traced back to old cells:

They may seem like different diseases at first, but it turns out, at their most basic level, they’re all caused by the same thing.

Can you guess what it is?

Cells have a lifespan and a limited number of times that they can multiply. When they reach the end of their lives, they become zombie cells which accumulate as you age. These cells are what causes illness and the undesired effects of aging:

“Zombie cells don’t divide anymore, but they’re not totally dead yet, either.

Like the zombies you see in the movies, zombie cells are stuck inside you, in a state of suspended animation.

It can happen to any cell that has reached the end of its life span.

This means if you’re over 40 years old, you probably have billions of zombie cells inside you right now.

And this is bad news.

Because when a cell becomes a zombie cell, it starts to pump toxic chemicals into your body, slowly poisoning the healthy cells around it.

Even worse, over time, these zombie cells can actually transform healthy cells into zombie cells, too.”

The biotech firm in question has found a way to eradicate zombie cells thus doing away with the undesired effects of aging. It has developed a pill containing compounds called senolytics.

The company behind the anti-aging revolution

Jason shares a few details about the company that we can use to identify it.

First, he states that its founder is a successful biotech entrepreneur who was named one of the top 100 innovators in the world under 35 by MIT Technology. In addition to that, he has achieved a lot in his career:

The team that runs its day to day activities includes a CEO that has a Ph.D. in physics and a doctorate in neuroscience from Stanford, a Chief scientific officer who is an authority in medical chemistry, and a CFO that has led three companies into IPOs and acquisitions.

Third, it had a market cap of $400 million as Jason was publishing his presentation.

Fourth, it has patented 140 of the most effective senolytic compounds.

He wrote a report about it titled The #1 Stock of This Generation: How You Could Ride the End of Aging to Enormous Stock Returns that you’d have to read to reveal its name and other details about it.

Fortunately, you don’t have to read that report because after doing a bit of research, I discovered the name of the biotech company he was talking about.

Unity Biotechnology is a startup that was founded by Nathaniel David and Jan Van Deursen, both of whom are senior figures in the field of medicine.

The company develops senolytic-based drugs that curb the effects of aging. It attracted investments from Jeff Bezos and Peter Thiel.

Nathaniel David’s profile matches the profile of the superstar founder Jason Stutman was fawning over in his presentation.

He has a Ph. D in molecular and cellular biology from the University of California, Berkeley. He co-founded a company (Syrrx) during the final year of his doctoral degree.

Who is Jason Stutman?

Jason claims that his trading strategy is quite simple: uncovering technological forces that are likely to shape society and getting into them (from an investment perspective) before they go mainstream.

We have seen this in play in other presentations he has made in the past. For example, he recently did one about a New 5G Technology Stock that perfectly encapsulated this.

He meets CEOs and CTOs, studies patent filings and other related documents, and does anything that can give him an edge in the markets.

This approach enabled him to predict the consumer robotics and automation boom. He also cashed in on the tablet and smartphone revolution in 2013 by investing in a pick-and-shovel play called Universal Display Corporation

He is the guy behind Topline Trader and Project Greenlight

What is Technology and Opportunity? (The Newsletter)

Technology and Opportunity is the newsletter that Jason Stutman promotes via the presentation.

It is through this advisory service that Jason reveals his stock picks (technology companies).

He ropes you in by promising to send you a free copy of The #1 Stock of This Generation: How You Could Ride the End of Aging to Enormous Stock Returns.

He also promises to send you free copies of the following reports:

As soon as you become a subscriber, you will also receive 12 monthly issues of the Technology and Opportunity newsletter – sent over every month with new investment opportunities.

You will also gain access to the custom web portal and receive “special situation” updates whenever Jason identifies an urgent investment opportunity that cannot wait for the newsletter.

How much do you pay to join Technology and Opportunity?

If you cancel your subscription within six months (180 days), you may receive a total refund of the fee.

Closing Remarks on The #1 Stock of This Generation

After doing my research, I discovered that Jason Stutman considers San Francisco-based Unity Biotechnology (UBX) as “the #1 stock of this generation.”

The presentation was meant to promote his newsletter, Technology and Opportunity, through which he recommends technology stocks.

The field of anti-aging is still nascent and many biotech startups have been founded to find ways of achieving what many consider an impossible feat. The promise of an anti-aging medication has captured the attention of investors and Jason wants you to join them.

Before you heed his advice though, do more research to ensure that you understand the implications of such an investment.