Have you come across Teeka Tiwari’s presentation where he claims to have found a ticker symbol that is minting 22 new millionaires a day? He quotes a retired NYSE president who referred to it as “the best kept secret on WallStreet” that 99.9% of Americans will miss out.

Ever since he started editing newsletters in 2016, Teeka has always been sharing his insights into the world of investments and in this latest installment, he wants you to get in on something he thinks will double in value over the coming months.

Let’s go through the presentation to find out the main talking points as we also find out what Teeka Tiwari is talking about in his pitch.

Teeka Tiwari starts his pitch by saying that there is a new financial technology disrupting the global financial system after a thousand years. He says that this new technology has grown at an incredible pace from less than one billion dollars at the start of 2020 to over $99 billion today, which is exactly what he said when he invited people to the event. 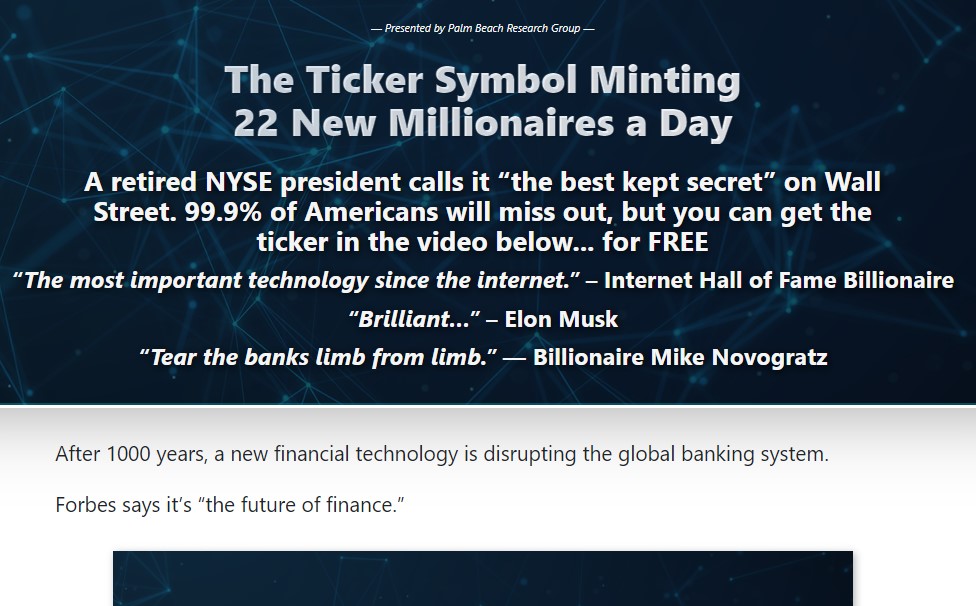 He says that according to the World Economic Forum, this new financial technology will be a disruptive threat to existing equity markets and could soon replace many traditional intermediaries and processes in the equity markets.

If you are familiar with Teeka Tiwari, you know that he is a big fan of cryptocurrencies and Blockchain technology. He has done multiple presentations touting various investments and I’ve gone through a few of them here on this blog.

Last year, he did pitches like The 1170 Account and New Banking Rule Set to Affect 234 Million Americans where he insisted that the financial system as we know it would be disrupted, much like he does here.

Circling back to the presentation, Teeka Tiwari says that he is going to give you the name of the ticker leading the charge on this new $867 trillion opportunity.

He says that this ticker is minting millionaires faster than any other investment in history and according to CBS News estimates, it has made “as many as 100,000 people” millionaires, which averages out to 22 new millionaires every day since it went live.

The ticker has doubled in value this year and according to experts, it could more than double again in the coming months.

If those clues are not already obvious by now, he is talking about Bitcoin (BTC). Bitcoin is the ticker he is raving about and he says that he wants you to invest in it.

Now, speaking of the financial technology he was referring to as laying waste to traditional financial institutions, he says that he is talking about Decentralized Finance. 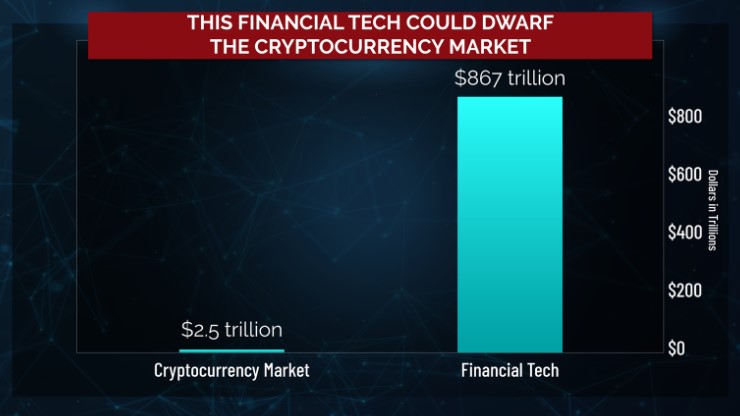 Teeka claims that Bitcoin is just the visible tip of the massive iceberg that is Decentralized Finance.

Decentralized Finance (often shortened to DeFi) is a blockchain-based finance system that does not have centralized financial intermediaries like brokerages, exchanges, or banks to provide the financial instruments. Instead, it utilizes smart contracts on blockchains with the most common one being Ethereum.

Teeka Tiwari says that DeFi is an 867 Trillion Dollar Investment Opportunity and adds that it will give the everyday American a chance to forego Wall Street and create an enormous amount of money for themselves. He says that it will make the use of banks to conduct payments obsolete.

How to take advantage of an $867 Trillion Investment Opportunity

Speaking of investments, Tiwari says that you should invest in companies giving birth to this new DeFi technology because he sees this transforming your financial life in a way that you can’t even begin to imagine.

He has a series of steps he wants you to follow to take advantage of this opportunity.

He says that step one can double your money shortly.

How will you do that? By investing in Bitcoin.

He sees it as the most visible tip of the DeFi revolution citing the fact that it reached a trillion-dollar market cap faster than anything in history.

Now that investors trust it as the ultimate store of value, he expects Bitcoin to be worth more than half a million dollars over the next five years.

He wants you to invest in five smaller cryptocurrencies (just like he did in 5 coins for $5 million a while back).

Teeka Tiwari believes that although Bitcoin is the visible tip of the DeFi revolution, another crypto is the beating heart of decentralized finance. He mentions that it’s growing fast, going up over 500% in 2021, which is 4X more than Bitcoin did in 2021.

He says that with the rapid growth of DeFi, this coin could quickly follow in Bitcoin’s footsteps and become crypto’s next trillion-dollar coin.

From that description, you can tell that he is talking about Ethereum (ETH).

He has published a new report called The Trillion Dollar Coin Portfolio. 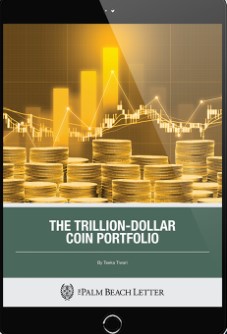 Inside, he writes about Decentralized Finance where he explains how DeFi works and reveals the other four top picks (five if you include ETH) that he believes could make you at least 10X your money as DeFi disrupts modern banking.

To get the report for free, you have to sign up for The Palm Beach Letter, an investment research letter published by Palm Beach Research Group.

Teeka Tiwari is the chief investment analyst of Palm Beach Research Group, a boutique financial research firm that is owned by Legacy Research. This firm is, in turn, owned by Stansberry Research.

Teeka Tiwari grew up poor in England. When he was 16 he came to America with $150 in his pocket. When he landed here, he was making $4 an hour preparing sandwiches at a restaurant in the financial district before he got his first big break in the financial services industry.

He was hired by one of Wall Street’s largest firms, Shearson Lehman, at the age of 18 years. By the time he was 20, he had become the youngest vice president in the firm’s history and was making a quarter of a million dollars a year.

Years later, he quit Wall Street and joined the Palm Beach Research Group because he wanted to do work that gave his life more meaning. He now publishes newsletters and writes about the markets.

The Palm Beach Letter is a monthly research service that is edited by Teeka Tiwari. It is the flagship investment advisory service of the Palm Beach Research Group. 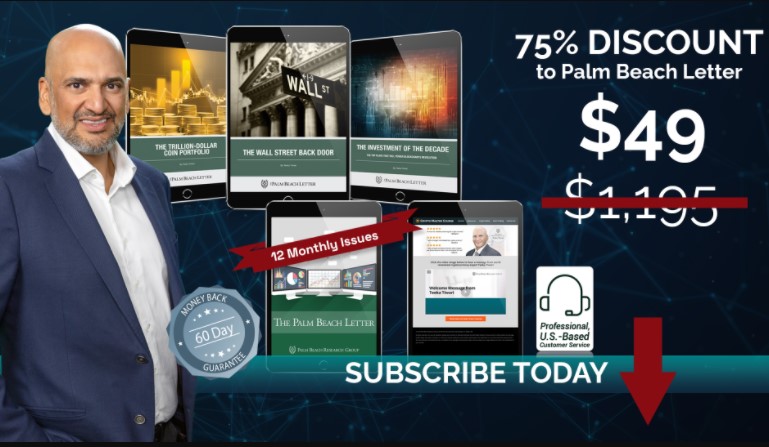 According to Teeka, the Palm Beach Letter is designed to show you how to protect and grow your wealth. He does not only recommend cryptocurrencies. He also writes about stocks, bonds, real estate, and private investment opportunities typically reserved for wealthy insiders.

Teeka Tiwari mentions in the presentation that when the Palm Beach Letter model portfolio was audited, it was confirmed that since 2016, he has delivered an average annual return per the recommendation of 281%.

When you sign up for the Palm Beach Letter, you get:

In addition to those benefits, you get instant access to “Teeka’s Digital Vault of Financial Secrets.” It comprises every past issue and special report. Some of the titles inside are:

Besides that, you also get the following special reports:

The Wall Street Back Door 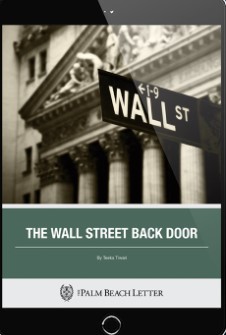 In this report, Teeka Tiwari will walk you step by step through how he gets into pre-IPO deals with a regular brokerage account.

The Investment of the Decade: The Top Plays that Will Power Blockchain’s Revolution.

In this special report, Teeka Tiwari has written about two bonus recommendations that he says benefit from every area blockchain touches.

When you sign up for the Palm Beach Letter through the link at the end of the presentation, you only pay $49 for your first year.

But for subsequent years, the fee is higher as stated on the order page:

“Upon renewal of your The Palm Beach Letter subscription, Palm Beach Research Group will charge $129 (plus applicable taxes)” 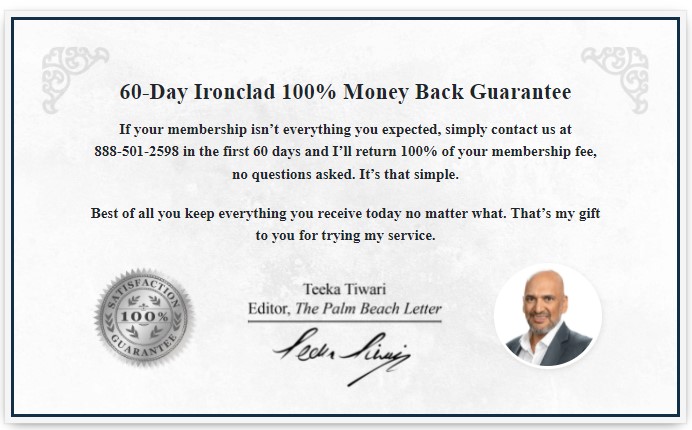 For months now, Teeka Tiwari has been talking about what he believes could be the biggest financial trend in all human history. In this presentation, it is no different.

He insists that there is a near bottomless spring of wealth we are about to witness as an entirely new banking system takes shape. The new system is Decentralized Finance (DeFi). He thinks DeFi has been gaining momentum and he sees Bitcoin growing 99X in just the last year as a sign of this.

So, he wants you to invest in Bitcoin and a few other cryptocurrencies to get yourself involved in this.

While all he says sounds great, Teeka Tiwari cannot guarantee you that you will make money by following his advice because all investments carry some degree of risk.