Palm Beach Research Group has been aggressively promoting Teeka Tiwari The Crypto Catch Up for the past few days.

In what is the latest of Tiwari’s webinar invites, he promises to provide you with “your last chance to get the life you want” and it has to do with investing in cryptos. He knows you may have missed out on cryptos last time they soared and he is counting on it getting you to listen – to be fair, he is no stranger to making bold promises and demonstrating how good of a crypto trader he is.

Therefore, in this piece, we will be looking ahead at what “The Crypto Catch Up” is all about in case you are considering signing up for it.

What is Teeka Tiwari The Crypto Catch Up?

The Crypto Catch-Up: Your Last Chance to Get the Life You Want is an online event that will be hosted by Teeka Tiwari during which he will be discussing new cryptocurrency investments. 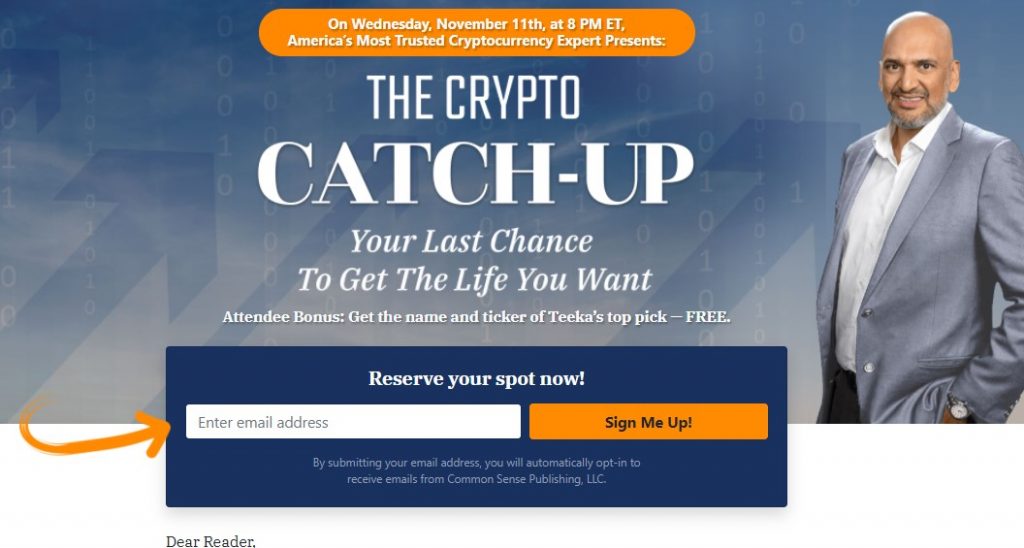 During the event, you should expect him to cover the following:

In the invite, Teeka mentions that he will introduce us to “a small group of cryptos with a ‘countdown clock’ embedded in their code.” The clock indicates the exact day those cryptos are likely to launch and thus, all you need to do is to buy them before they start going up.

Tiwari is not the only guru recommending that people invest in altcoins (a name given to cryptocurrencies that are not bitcoin). We have seen other gurus release their version of the same, albeit with different approaches.

Teeka Tiwari is a former Wall Street trader. He was born in England and moved to the US at the age of 16 “with just $150 in his pocket.” He worked his way to becoming the youngest employee of the now-defunct Lehman Brothers.

It also wasn’t rosy for him in the stock market. In 1998, he made a fortune by shorting stocks during the Asian crisis but then held his position for too long, which led to him losing everything, he even had to declare bankruptcy.

He recouped his wealth by investing in the market and went on to set up a hedge fund.

In addition to investing in the capital markets, Tiwari is also a cryptocurrency guru.

He is infamous for his “5 Coins to $5 Million” presentation that was featured on London Real TV where he touted 5 cryptocurrencies that he insisted were capable of earning you $5 million. Unfortunately, he didn’t specify how much you’d need to start with to get there but I suppose he revealed that to people who subscribed to his $2,500/$5,000 newsletter.

In a nutshell, Tiwari shares his insights regarding the best investments in cryptos via his newsletters.

How to take part in The Crypto Catch Up

You can register for the event to watch it live on November 11th at 8 PM ET. It will comprise a series of short videos and an exclusive broadcast followed by a Q&A session.

To sign up, you only need to provide your email address.

When you submit your email address, you will also be agreeing to receive promotional emails from an entity called “Common Sense Publishing, LLC” (it is indicated in the fine print).

From experience (attending other Teeka Tiwari webinars like Freedom 2020), if you miss the event or cannot tune in at 8 PM ET, you shouldn’t worry about it because it will be recorded and later published as a video. You’ll miss the Q&A session though.

Closing Remarks on Teeka Tiwari The Crypto Catch Up

Investing in cryptos was all the rage during the Bitcoin bubble of 2017 and although they’ve been through a tough period, they appear to be getting fashionable again. A couple of gurus so far have released presentations touting them and Teeka is merely the latest one to do so.

To be fair, altcoins have the potential to earn traders large returns in a relatively short period when things go according to plan.

Nevertheless, I should warn you that investing in altcoins comes with an element of risk because they are known to be volatile. They also have a higher chance of being part of a scam or a fraudulent scheme than the bigger, more well-known cryptocurrencies.

That said, the impression you get from the invitation is that Teeka Tiwari still believes that the biggest gains in cryptocurrencies are still to be made. He won’t be recommending bitcoin though; he prefers small cryptos i.e altcoins.