Teeka Tiwari put out a presentation in which he touts a Tech breakthrough that he says “will trigger a New Tech Mania.”

The header gives us a clue as to what kind of investment we are dealing with here. It reads,

“In 1999, the Internet triggered a historic stock market boom, leading to extraordinary gains of 1,494%, 2,619%, and even 3,770%. I believe it’s happening again with a revolutionary tech Forbes says could create a new class of millionaires.”

It implies that he expects gains that are almost synonymous with those recorded in the Dot Com Boom in the late nineties.

In this presentation, we take a closer look at what this tech boom entails.

What is Teeka Tiwari Tech Boom? (The Pitch)

Teeka Tiwari’s presentation centers on a tech boom that he thinks is about to happen, creating a new generation of millionaires. He expects it to replicate the gains of the Dot Com boom of the late nineties. 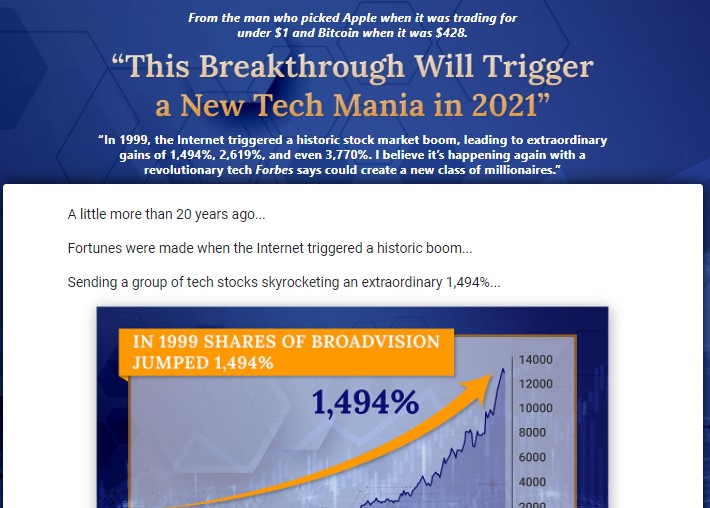 Fortunes were made when the Internet triggered a historic boom…

Sending a group of tech stocks skyrocketing an extraordinary 1,494%…

Now that same event that minted millionaires is back with a vengeance.

But this time, instead of the Internet…

It’s a new technology that’s been triggering a boom like we’ve never seen before.”

The Dot Com Boom, which was technically a tech bubble, was a period of excessive speculation involving internet-related companies. It was a period of exponential growth fueled by the widespread adoption of the internet. It came to a head in 2000 when the NASDAQ index rose 400%. However, almost all gains were given up by the end of 2002.

Tiwari says that the current stock market is likely to experience something similar, driven by a new technology (just as the internet drove growth back then). He says,

“A new exciting tech is creating a boom like we’ve never seen before.

Because this is part of one of the fastest-growing technology markets in the world.

I’m talking about a breakthrough Forbes called ‘the biggest disruptor in technology since the 1990s.’

PricewaterhouseCoopers said that investing in this tech is a ‘once in a generation opportunity.’

And CNBC says this tech ‘will be the biggest thing since the internet itself.’

Already, stocks related to this tech are skyrocketing….”

What breakthrough is he talking about?

Teeka Tiwari later reveals that he is referring to Cryptocurrencies and the Blockchain. He is saying that digital currencies as well as stocks related to the blockchain are going to rise in value because all kinds of investors are getting involved. He continues,

Hedge funds are getting in.

Pension funds are getting in.

They just invested $100 million into this opportunity.

Unfortunately, most people still don’t know about it.”

The cryptocurrency rally that started in 2020 is well-documented. It saw Bitcoin rise to historic levels, reaching a market capitalization of $1 trillion in February 2021. Blockchain-related stocks have also been doing well and financial gurus have been urging people to invest in them. I have encountered a couple of presentations touting such assets. A few examples of them include George Gilder’s The Cryptocosm and The Next Level Summit with Paul Mampilly.

Teeka Tiwari is convinced that investing in blockchain stocks and cryptos is the right move because three factors are in favor of the market.

The Three Catalysts behind the Tech Boom

He has identified three triggers that could spark the next tech boom. In this section, we go over each of these triggers.

According to Tiwari, digital assets and Blockchain stocks will do well because investors have fewer alternative investments to put their money into. He explains,

“It [TINA] stands for ‘There Is No Alternative.’

We have trillions flowing into the market…

Where do you think all that money is going to go?

It’s NOT going to stay in bank accounts… that’s for sure.

Investors have no alternative but to put their money in the market.

No wonder this is triggering a boom in the stock market.”

With few good alternative investments, Teeka Tiwari expects a lot of money to find its way into Bitcoin and blockchain assets.

The capital markets are more accessible to ordinary folks and that has resulted in greater participation. Teeka Tiwari says that it is reminiscent of the Dot Com Boom but this time, there are apps to help with the process. To quote him,

“If you were investing back in 1999, I’m sure you remember that even cab drivers were offering stock tips to their fares.

You see, with no other place to park their cash…

And with tech stocks exploding higher…

Investors felt like they were missing out on the action.

So pretty much everyone started buying stocks.

Attracting the masses into the stock market.

With more investors jumping in, they kept pushing stocks higher and higher.

In 2020 they added 3 million new funded accounts, with half of the new customers being first-time investors.

The pandemic also played a role.

‘The COVID-19 lockdowns and the plunge in markets in March persuaded millions of new investors to open accounts. Some of the action appears to be from people who would otherwise be gambling or betting on sports-both of which were shut down.’”

He is spot on with that assessment because the rise of platforms like Robinhood has made trading more accessible to the masses. And with all that money coming in, you can make money if you invest where the demand is.

By now, we know that he is talking about cryptos and the Blockchain and not some mysterious technology.

He doesn’t tease a crypto asset or even a blockchain stock. Instead, he just promises to show you how to get started if you read his special report called My #1 Way to Play this Tech Boom.

To get your hands on this special report, you have to subscribe to The Palm Beach Letter.

He is a former hedge fund manager and considers himself one of the world’s most successful cryptocurrency analysts.

Teeka Tiwari embodies the American dream. He grew up in the foster care system in the UK and came to the US at the age of16 with $150 in his pocket. By the time he was 18, he had become an employee at the now-defunct Lehman Brothers.

At the age of 20, he broke all barriers and become the youngest vice president in the history of Shearson Lehman (while this is impressive, it may not mean much because the organization wasn’t technically “Shearson Lehman” for long).

In addition to holding down high-profile jobs, Teeka was also an astute trader. In 1998, amid the Asian Financial Crisis, he made a fortune going short. Unfortunately, he later lost all his money because he hung on too long and even had to file for personal bankruptcy. He later rebuilt his wealth in the markets and launched a hedge fund.

What is The Palm Beach Letter? (The Newsletter) 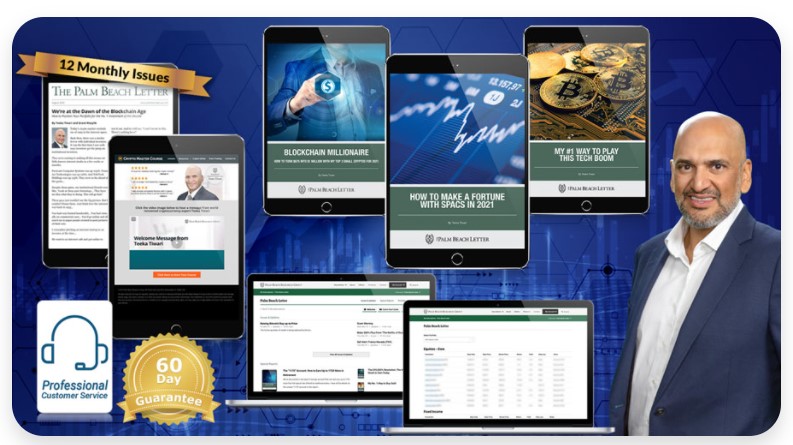 Edited by Teeka Tiwari, it covers the biggest trends in the markets and recommends the #1 investment to its readers each month. Tiwari says that he does all the work and just hands you all the information you need and you then have to decide if you want to participate.

He shows you what to buy, what price to pay, and what kinds of gains you can expect to make.

Tiwari has been the editor since 2016 and claims to have averaged returns of 384% every year thus outperforming the wider markets and the best hedge funds.

When you sign up for The Palm Beach Letter, you are entitled to the following:

If you subscribe to the Palm Beach Letter through the presentation, you get the following special reports:

How much do you pay to join The Palm Beach Letter?

An annual subscription to the Palm Beach Letter if you join through the link at the end of the presentation costs $49. Note that this subscription renews automatically every year for $129.

If you join through the official Palm Beach Research Group website, the normal price is $199.

Does The Palm Beach Letter have a Refund Policy? 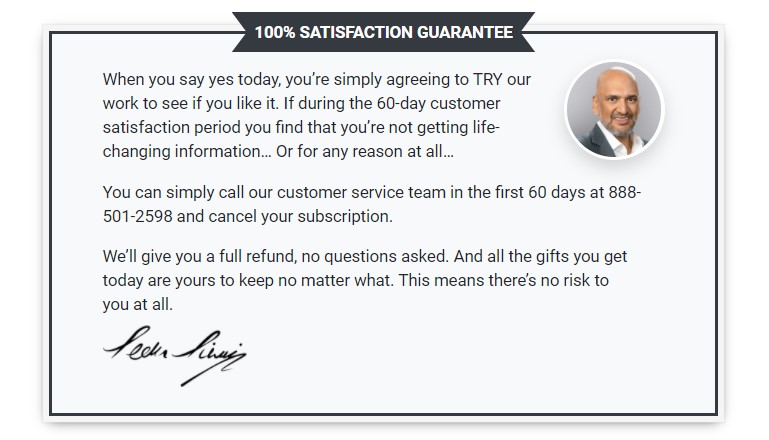 Palm Beach Research Group has a 60-day money-back guarantee if you join through the presentation.

Teeka Tiwari is a big fan of cryptocurrencies and the Blockchain. He has released dozens of presentations touting them since he started recommending them to his followers.

In 2020 and the first quarter of 2021, he was vindicated as these assets rose to unprecedented levels, making history and breaking records.

But as I write this article, the cryptocurrency market has lost its momentum and Bitcoin has shed a large part of the valuation already. This may have changed by the time you read this, so you should factor that in.

The downside of investing in cryptos is the fact that they are volatile. On top of that, although they have found acceptance from more mainstream players, they are still viewed with suspicion by others. For example, while countries like El Salvador embrace cryptos as currency, Chinese authorities are having none of it and are working hard to clamp down on them.

On the other hand, Blockchain is considered a technology that is on the cusp of mass adoption. You can invest in stocks that are related to it to earn big returns.