Teeka Tiwari has a reputation for talking about big investment opportunities that other analysts haven’t started taking seriously and in his latest event called Teeka Tiwari’s Third Trillion-Dollar Trade, that is the case.

He claims that two of his past predictions have done exceptionally well for investors who took him seriously and that he is on to something similar for the third time.

I took it upon myself to elaborate on what Teeka is talking about and by reading this article, I hope you will have an idea of what to expect from Teeka Tiwari’s Third Trillion-Dollar Trade event.

On the landing page of the invitation to the event, it reads, 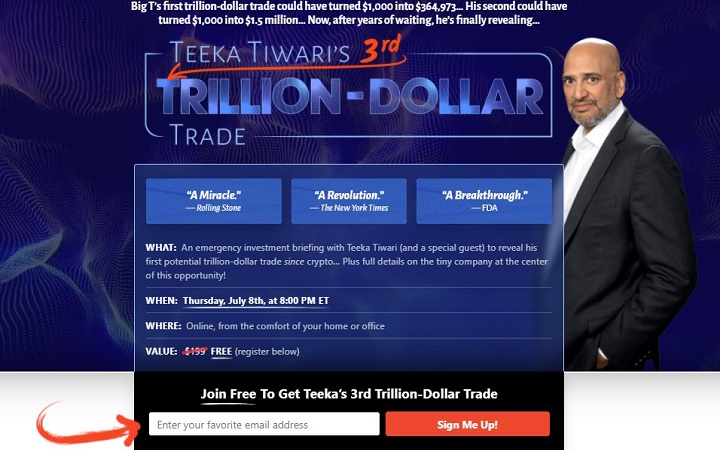 This means that he is preparing to reveal another investment that he hopes will follow the examples of those two other trades in becoming profitable. He calls it his “3rd Trillion-Dollar Trade.”

He says that it could be the first potential trillion-dollar trade since the cryptocurrency market went up exponentially, with the latest Cryptocurrency boom that analysts are struggling to make sense of.

Teeka Tiwari’s new investment opportunity involves a tiny company that is right at the center of the new phenomenon, which is typical of investment gurus these days. By this I mean that most investment gurus usually identify an industry or market they expect to change dramatically and they pick a small company that they predict will grow exponentially as a result.

We’ve seen it before in presentations like Alex Koyfman’s $6 Semiconductor Company pitch or even America’s Last Digital Leap by Jeff Brown.

Teeka Tiwari says that his Trillion-Dollar trade opportunity will involve a pending “miracle” in human medicine that may trigger a brand-new $1 trillion industry enabling some investors to have 100 years’ worth of stock market gains in just 18 months.

According to Teeka Tiwari, the “miracle” of human medicine he is referring to may solve a crisis that impacts up to $800 million people and costs the economy $2.9 trillion per year.

He also eyes five penny stocks that he expects to do well. He even says that investing just $1,000 could earn you returns that could help fund your retirement.

Teeka Tiwari is an investment analyst who works for Palm Beach Research Group. He edits the flagship newsletter offered by the firm, The Palm Beach Letter.

In addition to that, he is also the editor in charge of other newsletters like Palm Beach Crypto Income, Palm Beach Confidential, Palm Beach Venture, and The Alpha Edge service. 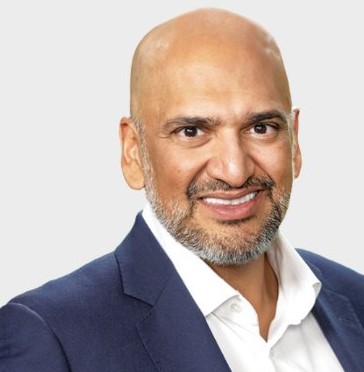 He is a former hedge fund manager and is considered by some as a leading cryptocurrency analyst.

Teeka Tiwari grew up in the foster care system in the UK before he came to America, which he did at the age of 16. When he arrived, he had just 150 dollars and the clothes on his back.

He worked odd jobs before he was employed by Lehman Brothers at the age of 18. In two years, he had become the youngest vice president in the history of Shearson Lehman (note that although that was impressive, the period during which it was called “Shearson Lehman” wasn’t long).

Teeka Tiwari also capitalized on the Asian Financial Crisis and in 1998, he had made a fortune by going short. Unfortunately, due to his inexperience, he hung on to his investments for too long and within three weeks, he had lost everything he had made and had to file for bankruptcy.

He claims that after that, he developed a newfound appreciation for risk and was keen on managing it. Nowadays, his mission is to teach individual investors how to grow their money sustainably.

Tiwari has in the past been brought on by CNBC, the Fox News channel, the Fox Business Network, and ABC’s Nightline, among a host of other platforms to discuss investments.

Teeka Tiwari’s host, John Burke, drops a few hints as to what trillion-dollar industry they are referring to. He says,

“After 50 Years, the Govt. Is Being Forced to Open this Trillion-Dollar Opportunity to American Investors

Bottom line, we’re witnessing the birth of the next potential trillion-dollar industry.

I’d bet that 99% of Americans know little or nothing about this coming revolution.

But please don’t worry if that’s the case: It’s absolutely not your fault.

The CIA… Congress… and the FDA have spent millions of dollars and 50 years trying to confuse, scare, and KEEP you from this opportunity.”

He believes that it involves a molecule that is so powerful, the government labeled parts of the opportunity as a “breakthrough.”

“The so-called authorities — in Washington, on Wall Street, and beyond…

They’ve kept a massive secret from the American people since 1971.

It involves an extremely powerful scientific breakthrough… so powerful, the government considers it a threat to civilization.

Frankly, the authorities should be scared out of their minds.

The next trillion-dollar revolution won’t just disrupt an industry or two.

It could disrupt civilization itself — while threatening to topple the elites, even as a small circle of early investors gets very, very rich in the process.”

From those clues, I think he may be talking about legalized cannabis (recreational or medical).

Teeka Tiwari is not averse to investing in marijuana companies. In fact, he hosted a summit last year called “Teeka Tiwari’s Cannabis Conspiracy” where he invited Judge Jeanine Pirro to discuss the merits of investing in cannabis stocks. They also talked about the health benefits of some compounds extracted from the plant.

This time, he has brought in someone he calls “Mr. Z” (to hide his identity) to discuss the new trillion-dollar opportunity. As I mentioned above, this isn’t the first time he is bringing a special guest to his event to make his predictions appear more credible.

What do we know about the special guest?

He is an expert in the potential trillion-dollar industry. He joined the world of investments at a young age when he graduated from Harvard Business School. He joined Wall Street in his early 20s and by the time he was 23, he had become the youngest vice president at Bear Stearns.

He went on to have a successful career investing in internet companies and eventually, identifying new niches that could potentially be profitable.

Tiwari says that he was the one who became aware of a strange “revolution” that was brewing in Silicon Valley that involved a breakthrough in human medicine that was so large, it could potentially save millions of lives and span a multi-trillion dollar industry.

Teeka Tiwari is known for making bold predictions about the stock market. He has been urging his followers to invest in cryptocurrencies and claims to have been one of the first analysts to talk publicly about how great of an opportunity they were.

He has also been telling people to invest in startups because they present them with a great opportunity for big, quick returns.

He doesn’t always get things right because such investments have the potential to go either very well or very badly. So, you should take what he says with a grain of salt and objectively evaluate all opportunities first, rather than follow his general advice without vetting it.

Teeka Tiwari is not afraid to dream about a new investment idea that can yield big returns for investors. And that is the approach I think he will take with what he regards as his Third-Trillion Dollar Trade.