Wondering what Teeka Tiwar’s The Super Halving event is all about?

Teeka Tiwari has been promoting an event he called the Super Halving summit which, unsurprisingly, will feature a discussion about invest in crypto assets.

He claims that there is an impending event that will alter the crypto space in a significant way and shares six tiny crypto investments with similar technologies that he believes will create a massive fortune for smart investors.

I will walk you through exactly what his Super Halving summit event will be about and whether you should trust Teeka Tiwari and his crypto investing pitch.

What is Teeka Tiwari’s The Super Halving?

Depending on when you are reading this, it may have already happened live in which case you will be seeing the presentation of the Super Halving summit instead.

As I’ve mentioned, it concerns a significant event in the cryptocurrency market he calls “the super halving” and exists to pitch his six tiny crypto investments.

As the event has not yet taken place I can only speculate on what he is offering, however I anticipate you will need to join Palm Beach Confidential to reveal the picks. 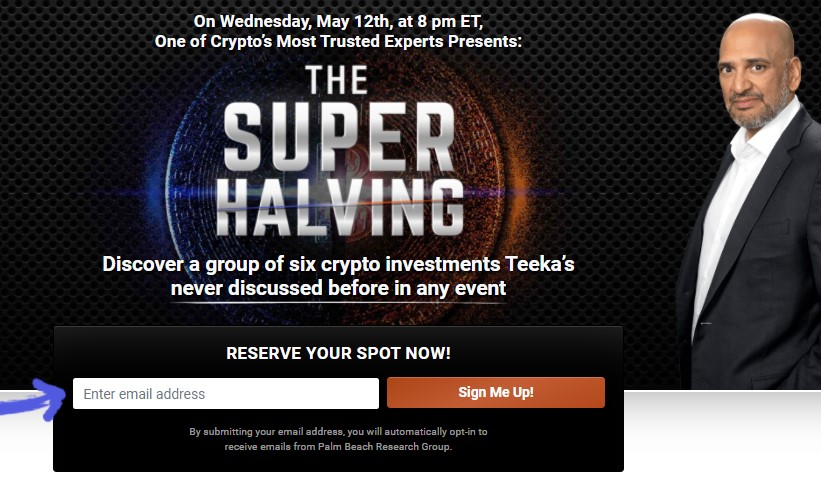 So, what is this event all about?

First, he clarifies that has nothing to do with the Bitcoin Halving that happened in 2020:

As you’ll discover, what Teeka calls the “Super Halving” has nothing to do with a regular Bitcoin halving. Or an Ethereum halving. Or any coin’s specific halving.

The Bitcoin halvening (or halving) is a moment when the Bitcoin’s block subsidy is cut in half. This means that miners are rewarded half of what they were getting for mining a block before the fact. It happens roughly every four years or after 210,000 blocks have been mined.

When the halvening happens, the value of the currency tends to rise although this is not guaranteed, especially if the value has already been priced in. Since Bitcoin is the most recognizable and influential digital currency, its value is the bellwether of the entire market – prices of altcoins (the other cryptos) follow that of BTC.

Going back to Tiwari’s presentation, ‘the super halving’ he wants to talk about could reduce the amount of new Bitcoin hitting the market to zero and that you should act beforehand to profit from it. We’ll have to wait and see how this will pan out because unless you stop miners from mining the currency, new Bitcoin will continue hitting the market until the 21 million BTC limit is reached.

Tiwari will also talk about a group of six “explosive crypto investments” he says he has never discussed before that should benefit from this event.

Tiwari was born poor in the UK and grew in the foster care system there before deciding to immigrate to the US at the age of 16. He worked odd jobs before getting his break in the financial sector when he joined Lehman Brothers at the age of 18. He became a VP at the now-defunct Shearson Lehman at the age of 20.

He was also trading professionally and in 1998, he made a fortune by going short during the Asian Financial Crisis. However, he lost everything and went bankrupt a few weeks later when the market went against him.

Taking valuable lessons from his losses, he started rebuilding his portfolio and even launched a hedge fund. He later joined the newsletter editing business to help retail investors make better investment decisions.

He is an avid cryptocurrency trader; most of his investment research services are about investing in digital currencies. He claims to have spotted Bitcoin’s potential in 2016 and recommending it to his followers while it was trading at around $400.

How to attend Teeka Tiwari’s The Super Halving Summit

In case you are eager to find out what Teeka is going to talk about, you can attend The Super Halving event for free on May 12th at 8 PM.

To attend the webinar as it happens, you have to sign up for it by providing your email address on the invitation page. It looks like this:

Note that by registering for the event with your email address, you will be added to the Palm Beach Research Group mailing list and will start receiving emails from the firm as they promote different products.

If the event has already taken place chances are you’re now able to watch the presentation recording of the Super Halving summit.

Many have been skeptical of Teeka Tiwari and the claimed results however I have first hand experience investing in the crypto’s he recommends.

Last year he shared not 1 alt coin, but 5 coins.

I didn’t invest in all of them, however I did invest in 3 of them, which were Cosmos, Uniswap and STX.

Of course you could have pretty much bought any cryptocurrency in the last few months and made 5x returns, the market has gone absolutely crazy.

That being said, these cryptos that Teeka picked out have done exceptionally well and there is no reason that you shouldn’t trust what he says.

Of course like any investment, you need to do your due diligence and only set aside money you can afford to lose, especially when it comes to crypto.

Going back to 2017 I had six figures in crypto and then the market crashed. I believe I hit a low in March 2020 of around $18,000 which has since grown back up to multiple six figures.

The point is, cryptocurrency markets are extremely volatile so be careful regardless of who you are following in this space.

Teeka Tiwari’s The Super Halving Event has a familiar ring to it because it will center on cryptocurrencies with an emphasis on a group of six cryptos worth investing in.

I say this because Teeka Tiwari once hosted an event called 5 Coins for 5 Million that got a lot of attention and made him infamous.

In order to reveal the picks you had to join Palm Beach Confidential at a discounted rate, I suspect the same will happen here.

He says that the super halving will have nothing to do with the Bitcoin halving and that it could cut the supply of new BTC entering the market.

I am not sure how this is meant to work so it will be interesting to see what Teeka is proposing. I suspect he is getting at the fact that money from wall street is flowing into crypto.

If you cannot attend the event live as it happens, don’t worry about it because Tiwari will release a video recording of it soon after as he tends to do with these events.

Depending on when you are reading this you may have actually watched the recording presentation for The Super Halving and not the live event.

We will keep a close eye on how it pans out and update this review with more info on his six picks, the ticker symbol of each crypto and the research service you’ll need to join to reveal them.