Teeka Tiwari, who claims to have been voted the world’s most trusted crypto expert, sat down with his host to shoot a presentation where he promises to show us “The #1 Way to Play the NFT Craze in 2022.”

According to Teeka, people are already making millions from “the hottest trend in the world right now” (NFTs) and he wants to help you get in on it.

In this piece, I walk you through the presentation as I highlight the main talking points Teeka Tiwari raised.

What is Teeka Tiwari NFTs?

John Burke, the host of the presentation, started the webinar off by saying that NFTs is the hottest trend in the world right now.

He says, “when it comes to NFTs, most Americans are sitting on the sidelines scratching their heads. But the few who understand what’s happening are getting rich.” 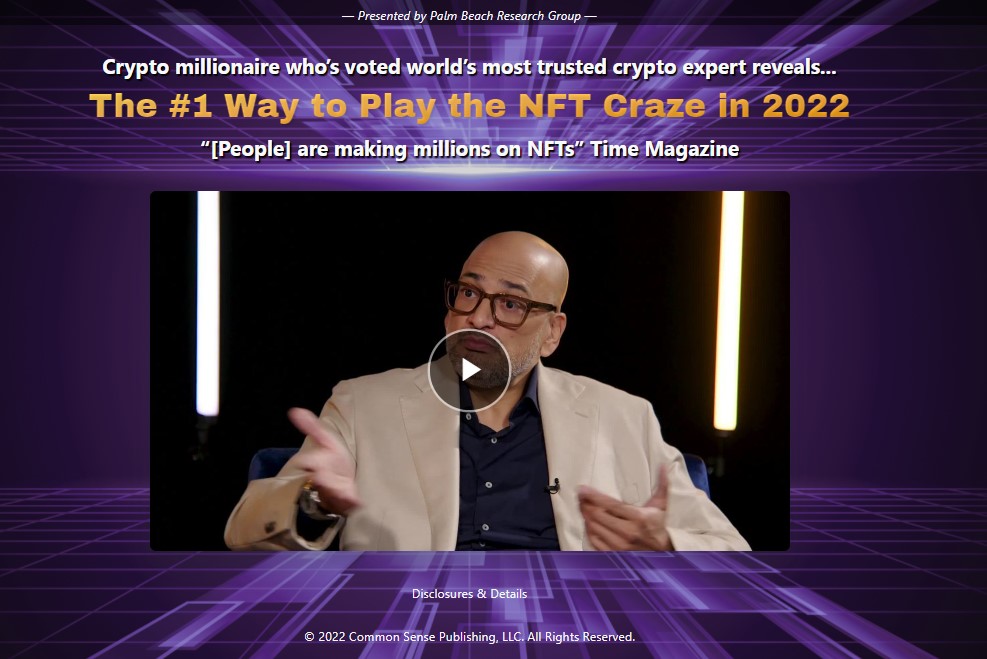 This perfectly encapsulates what most people feel about Non-Fungible Tokens (NFTs).

Some people are dismissing it as a fad and a con job that doesn’t make sense. They think of it as a ploy for people to make insane amounts of money for something that doesn’t offer concrete value.

In the meantime, celebrities and other players have been making a lot of money off of NFTs.

John notes that although market volatility within the crypto space has risen, it hasn’t stopped this trend. He even refers to it as “the new crypto gold rush.”

Teeka Tiwari comes in and says that the prices of some of the Non-Fungible Tokens are ridiculous. And he presents us with a couple of examples: 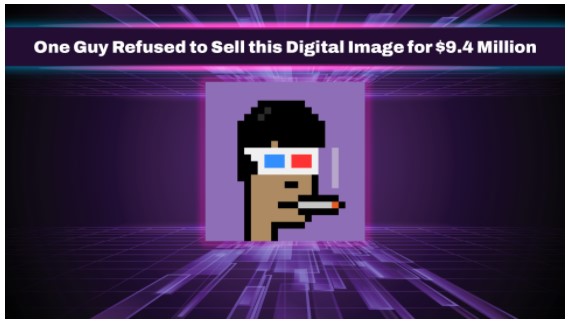 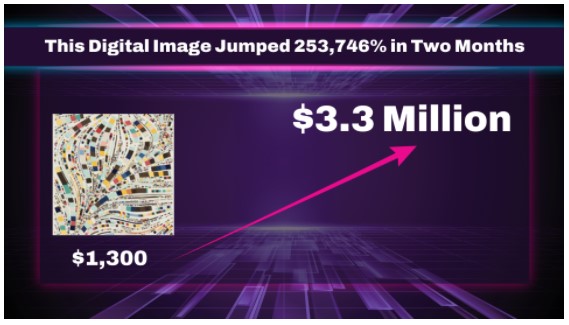 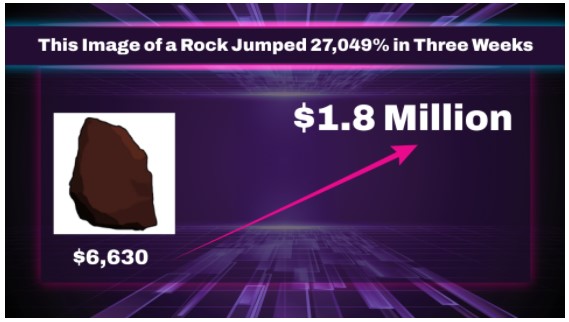 He admits that just a few months ago, he laughed at the idea of NFTs selling for all that money. He says, “Like most people, I couldn’t believe what was going on. I couldn’t fathom the lunacy of a cartoon ape selling for six figures.”

But over time, he changed his opinion. He realized that these images that are selling for millions are “a huge distraction.” He says that there is a bigger story behind it and that we should be focusing on the technology behind NFT.

Teeka Tiwari tells us that NFT technology will help launch the next generation of the internet.

Although he doesn’t explicitly mention it, I think he is talking about Blockchain technology.

The blockchain is the fundamental mechanism behind cryptocurrencies and NFTs. It is a ledger system that allows participants to store information in a network shared among many computers. This information is impossible to change.

There has been talk of a new version of the internet based on the blockchain called Web 3.0. It is a decentralized platform likened to the internet (Web 2.0) where content creators can create and get paid for their content through NFTs.

Web 3.0 and the Metaverse are widely seen as the biggest trends of the next few years.

Circling back to Teeka Tiwari’s pitch, he tells us that NFTs are not a fad because they represent Property Rights.

And here’s why that’s a big deal.

Our world is becoming more and more digital.

We do everything online these days. We work online, play online, watch online, talk online, exercise online and learn online more than ever before.”

He says that as the trend of digitization intensifies, we will spend more and more time online.

In the new version of the internet, everything will be digitized and NFTs will provide us with a way of tracking ownership of digital assets because, by definition, they are a certificate of ownership.

Tiwari says that ownership via NFTs will not just be restricted to digital arts and collectibles. Other assets that could use NFTs include music, the video game industry, and even real-world tangible goods like property.

The latter will be made possible by tokenization.

Tokenization is a process by which you break down “ownership” of a physical object or properties into units of ownership, each represented by an NFT that can be traded. It is like how ownership of a company is broken down into shares that represent part ownership.

This reminds me of Jeff Brown’s presentation “How To Invest In GTE Technology” where he talks about tokenization and the impacts it has on how we will own things in future. Coincidentally, Jeff was also telling us that NFTs are just the beginning or this trend.

Teeka Tiwari believes that the concept of NFTs will be adopted by the masses. He says that big tech companies like Twitter, Amazon, Microsoft, Google Apple, and Facebook are already involved and investors like Kevin O’Leary, Gary Vaynerchuck, Mark Cuban, and even Facebook’s Zuckerberg have made huge bets.

Teeka says that you can invest in the trend without speculating in pieces of digital art.

Instead, he wants you to invest in NFT projects, which he doesn’t explain as clearly as we’d like.

He says that NFTs projects are already causing disruptions and some companies involved with them are already going up. Like this project, he highlights in the presentation. 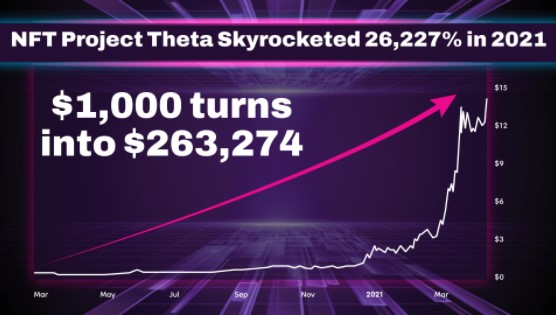 He wants you to invest in this trend, but you have to do it fast. Why? This excerpt explains it:

“You’ll need to act very quickly because we’re moments away from a watershed moment in this market.

The new internet could begin by February 28th”

So, what is this watershed movement he is talking about?

We learn that he is referring to the development of Ethereum 2.0. He says that the Ethereum blockchain has been due an upgrade because it has become so popular that its network is clogged with too many transactions.

Teeka tells us that the lead developer could flip the switch (launching Ethereum 2.0) within the stipulated date.

He thinks that investing in the Ethereum cryptocurrency is a good idea.

But he also has his sights set on other investments. He singles out two ways of investing in the NFT trend.

The first is to buy shares of a pick and shovel company he has identified that may benefit from the trend. He says that investors like Ray Dalio, Ken Griffin, and Jim Simons are loading up on shares of the company.

He has put all the details of the company inside a special report called The #1 Stock for the NFT boom.

The other way to benefit is to invest directly in his three top NFT projects.

He has written another special report with all these projects listed out called 3 NFT Projects for the $139 Trillion Revolution.

You can get these reports if you sign up for his advisory service, The Palm Beach Letter.

Teeka Tiwari is a cryptocurrency expert and the leading analyst at the Palm Beach Research Group, an independent publisher of investment advice.

Teeka Tiwari is a former Wall Street vice president and hedge fund manager whose track record in the world of cryptos has been good (if he is to be believed). For example, he picked Bitcoin in 2016, before it skyrocketed as high as 15,787%, and Ethereum when it was trading for just $9 before it soared as high as 54,244%.

Teeka edits a host of newsletters at Palm Beach Research Group where most of what he does is predict how stocks are going to behave.

Teeka Tiwari does not restrict the industries he covers in his material. So, in addition to cryptocurrencies, he also writes about the metaverse, blockchain technology, and tech startups, just to mention a few.

Tiwari is known for making audacious claims in his pitches like “The Liberty Code,” “The 3rd Trillion Dollar Trade,” and “Untouchable Stocks.”

Teeka Tiwari’s The Palm Beach Letter is a newsletter by the former hedge fund manager that is dedicated to finding the biggest trends in the market.

Teeka shares his #1 investment for each month and it can be a stock, an income play, or other little-known alternative assets he has discovered while doing his boots-on-the-ground research.

The Palm Beach Letter costs $49 for your first year if you join via the link provided at the end of the presentation.

However, when the subscription auto-renews at the end of the year, they charge you $129 per year every year after that:

“Upon renewal of your The Palm Beach Letter subscription, Palm Beach Research Group will charge $129 (plus applicable taxes) to the credit card or other means of payment on file. To cancel your subscription without incurring such renewal fee, you must do so at least one day prior to the renewal date.”

That is a quote taken from the fine print at the bottom of the order page.

Teeka Tiwari’s NFT presentation is not about finding the best monkey pictures in the market. Rather, it is about investing in companies making the infrastructure for NFTs.

He says that investing in those companies is like investing in “NFT projects.” He doesn’t reveal much about these companies (he only tells us that one of them is involved in rolling out Web 3.0).

Teeka Tiwari is very cryptic in his messaging in the presentation but he does reveal that you can invest in Ethereum “before they flip the switch on Ethereum 2.0” after which it will be too late. By ‘they,’ he is referring to the developers of Ethereum.

To learn about the other investment opportunities, you have to sign up for his newsletter, The Palm Beach Letter, where he will share more information about those NFT projects.