What is Teeka Tiwari Genesis Technology?

If you have come across a presentation by Teeka Tiwari touting “The Investment of the Decade” you are probably asking that very question.

Teeka Tiwari Genesis Technology concerns an innovation that he claims could soar by up to 295,000% (going by World Economic Forum estimates).

He thinks it may prove to be even more important than 5G, IoT, and AI.

Having sat through the presentation, I wrote this article to give you a summary of what he was talking about.

I hope that after you read this, you will be in a better position to determine whether it is a viable investment opportunity.

What is Teeka Tiwari Genesis Technology 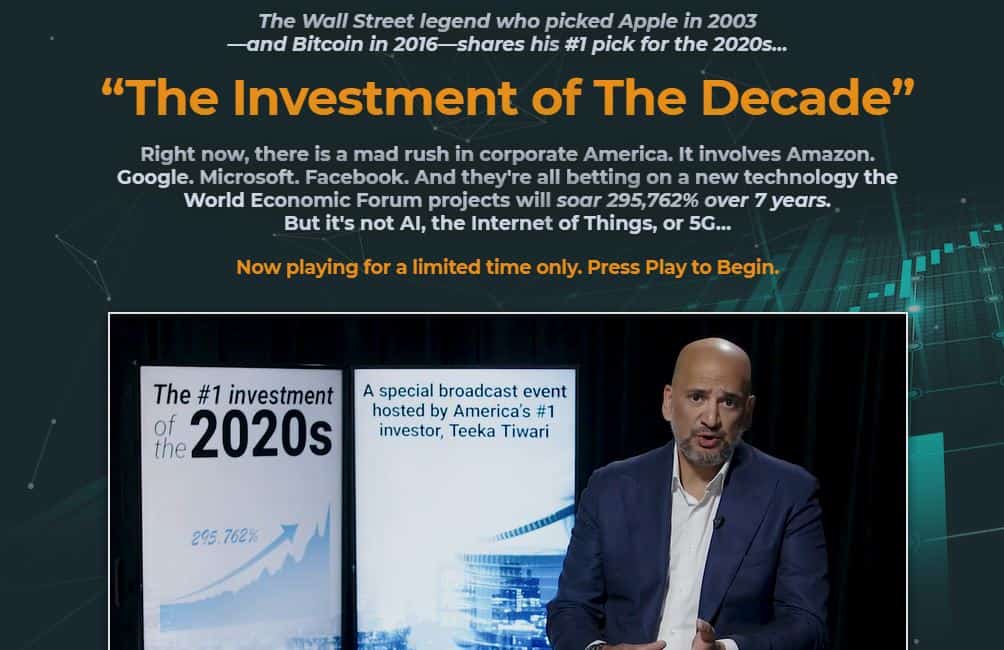 Before we go any further, the technology he is talking about is blockchain. Blockchain is a decentralized ledger system that provides us with a safe and incorruptible way to store records.

Here is how Tiwari describes it:

“At its core, blockchain is really just a very secure way to store information…

It is the safest way to store information that has ever been devised. Because you can’t ‘hack’ the system.

So, blockchain’s potential uses are wide and varied…”

It has a wide variety of uses and is mostly used to store information. It is also the foundation of cryptocurrencies like Bitcoin and Ethereum.

In the presentation, Tiwari says that blockchain use cases will rise as more industries embrace it to streamline their operations because data storage is one of the biggest business considerations in the age of Big Data.

How to Invest in Teeka Tiwari’s Genesis Technology

As blockchain becomes more ubiquitous, smart investors will invest in companies that will be involved in the revolution.

That’s where Teeka comes in with his three blockchain stock picks that he predicts will go up by up to 295,000%.

The three companies are not the sort of stocks that mainstream financial media would bring to your attention. He says that you may never have heard of these companies.

He describes them as small companies that are helping the bigger, more recognizable companies to integrate blockchain into their storage systems.

Here is how he describes them:

He says that it will be in charge of a blockchain exchange:

“Well, soon, we’re going to see a brand new blockchain exchange hit the markets. And one company has positioned itself as the sole ‘gatekeeper.’ You see, it’s the only company cleared by the SEC to trade blockchain investments…”

The second company is building a blockchain-based payment system:

“The Next Visa: The Blockchain ‘Payment Stock’ I Predict Will Go Up 16x! …. As I mentioned earlier, I believe our current debit and credit cards will soon disappear… They’ll be replaced by better, much safer ‘blockchain-backed’ cards…. One payment company right now has already implemented blockchain into its system!”

He compares the third one to Cisco and how it built the infrastructure needed to power the internet. This third pick is going to build the hardware needed for the blockchain boom:

“One company has brilliantly positioned itself to scoop up billions in revenue by supplying the hardware needed to power the blockchain boom.”

They all have big-name investors to add to their gravitas.

Although he didn’t reveal their names during the presentation, he wrote a report about them for people who would like to invest in them. The report is called The Investment of the Decade: Three Must-Own Stocks that Will Power Blockchain’s 295,000% Revolution and the only way you can get your hands on it is by subscribing to the Palm Beach Letter.

Who Is Teeka Tiwari?

Teeka Tiwari is the founder of the Palm Beach Research Group.

Teeka moved to the US from the UK while he was still a teenager. He had a tough upbringing as a child in his native country (the UK) because was raised in the foster care system.

When he arrived on American shores, he had a steely determination that was uncharacteristic of young people his age, but it was crucial to his success. He was the youngest employee at Lehman Brothers at 18 and he later became the youngest VP in Shearson Lehman’s history.

After having a lucrative career on Wall Street, he quit to help Main Street Investors make better decisions in the stock market. Writing newsletters was one of the ways he intended to achieve that goal.

What Is The Palm Beach Letter?

The Palm Beach Letter is an investment advisory service that Teeka Tiwari edits for the Palm Beach Research Group. Through it, he suggests “off-Wall Street” investment opportunities you may not hear about anywhere else.

A one-year subscription costs $199 and it comes with a 60-day, money-back guarantee.

Here is what you get when you subscribe to the Palm Beach Letter:

In addition to the above-listed benefits and the first report (The Investment of the Decade), you also receive four free special reports:

In his presentation, Teeka Tiwari refers to the blockchain as the “genesis technology.” He also thinks that it is the investment of the decade and that it will rise drastically in the 2020s.

The main reason he thinks it will be more important than 5G, AI, or the Internet of Things is that it will be pervasive. He thinks that in the next ten years, nearly every industry will adopt blockchain because it will help streamline operations.

Therefore, he thinks that the best way to make money from the revolution is to invest in blockchain stocks. Over time, those investments will rise steadily.

He has identified three stocks that he suggests you consider because he thinks that they are perfectly positioned to grow by up to 295,762%